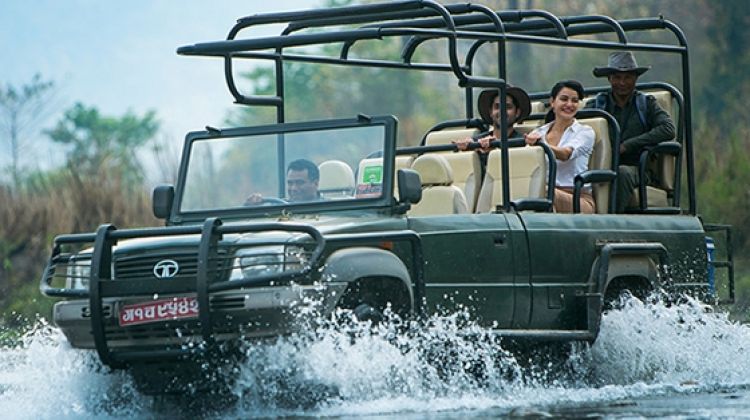 HIGHLIGHTS
Chitwan National Park is one of the most popular wildlife safari destinations in Nepal. Located in the plains of the Terai in the southern part of the country, this national park is known for its abundance of wild animals, including some endangered species such as one-horned rhinos and royal Bengal tigers.

Join us on this 3-day trip to the national park and get to enjoy the best of Nepal's rich biodiversity. The national park came into existence in 1973. In 1984, UNESCO designated it a world heritage site. This wildlife reserve is home to 56 species of mammals, including endangered one-horned rhinos and royal Bengal tigers, 543 species of birds, 126 species of fish, 590 species of butterflies and 47 species of reptiles.

You will take a comfortable tourist bus from Kathmandu to Chitwan on the first day of the trip. The next two days, you will be occupied in jungle safaris, nature walks, bird watching, local boat rides, and a traditional performance by the Tharus, an ethnic group indigenous to the southern plains of the country.

The best time to visit the national park is from March to May and from September to December. Head for the bus station on the last day of the tour and catch the bus to Kathmandu. For more details, please go through the itinerary below.
View More
CUSTOMER REVIEWS ABOUT OUTSHINE ADVENTURE PVT LTD
5 - Excellent
Based on 52 reviews
P
5 - Excellent
Provasaku's review for another Outshine Adventure Pvt Ltd tour
“We are a couple of Korea Nationality, we went to trek with Outshine Adventure, provided a guide named Shanker was fantastic. We highly recommend them. Thank you.”
I
5 - Excellent
Itzhak's review for another Outshine Adventure Pvt Ltd tour
“Excellent”
I
4 - Very Good
Ivan's review for another Outshine Adventure Pvt Ltd tour
“Gokul & team had outdone themselves. The tour was tailor made for 28 of us Kiwanians after our ASPAC convention in Kathmandu. Meticulous attention were given to cater for us who came from all the world ie Malaysia, US, Japan, Australia & Canada.

Other Practical InformationPlease note that the government of Nepal currently does not allow elephant safaris in the national park.
QUESTIONS AND ANSWERS Find answers to the most frequently asked questions about this tour.
Ask a question
NEED HELP OR HAVE A QUESTION ABOUT THIS TOUR?
If you have any question about this tour or need help with planning a trip, please do not hesitate to get in touch with us. We're ready to help.
Get help
days 03 From US$ 150 See Group Discount
CHECK AVAILABILITY
Response Time: 1 hour Response Rate: 100% MAKE AN ENQUIRY