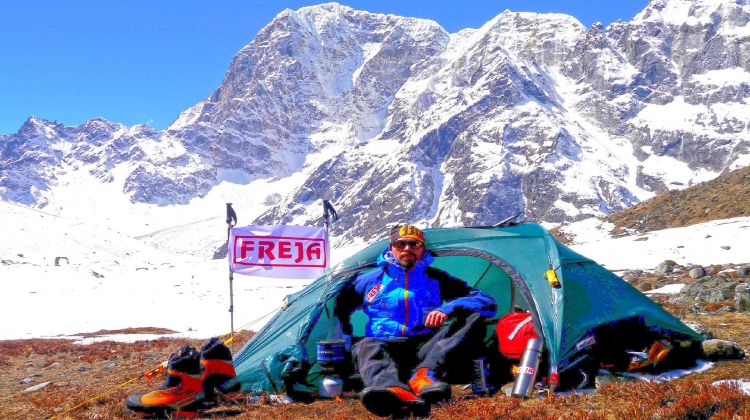 Tour with Flexible Booking Policy
HIGHLIGHTS
Are you looking for a climbing challenge? Join our super adventure climbing program that includes the three most famous peaks in the Everest Region: Pokalde Peak, Island Peak, and Lobuche East Peak. Our program has been carefully designed with a gradual ascent, proper acclimatization, and escalating complexity in mind. We are sure that the sense of accomplishment you will experience after scaling three of the most famous Peaks in the Everest region will linger in your memory forever!

Pokalde Peak or the Dolma Ri (5806m) is comparatively the easiest climb. Island Peak (6,189m), originally known as the Imja Tse, is located in the heart of the Everest region and derives its name from its striking location in the middle of the Chhukung valley, like an Island on a sea of ice. It is a tougher climb than Pokalde, but still, Mount Lobuche East (6119m) climb is the most challenging of the three.

We'll begin our trip following the famous Everest trail via Namche, Tengboche, and Dingboche. The trail to Pokalde Peak deviates from Dingboche while following through the usual route to Everest Base Camp. We will cross the Kongma La pass (5,535 meters) to reach the high camp of the peak. The trek from the camp through the rocky trail eventually rewards you with an extraordinary mountain spectacle including Mt Makalu, Ama Dablam, Pumori, and a vast mountain vista of the Khumbu region. After summiting Pokalde Peak, we trek to Chhukung for our next target, Island Peak. Hard efforts getting to the top of Island peak are worth finding Lhotse, Nuptse, Baruntse, Ama Dablam and Makalu at tip of your nose. Having done Island peak we descend down to Dingboche, trek up to Everest Base camp and Kala Patthar and move forward to Lobuche East peak. Having done with Lobuche East peak, one of the most challenging among 'trekkers peaks' in the Everest region we retrace our path to Lukla via Namche with a sense of achievement.
View More
CUSTOMER REVIEWS ABOUT HIMALAYAN GLACIER ADVENTURE AND TRAVEL COMPANY
5 - Excellent
Based on 23 reviews
R
5 - Excellent
Rachel's review for another Himalayan Glacier Adventure and Travel Company tour
“Four of us planned for the Everest base camp hike and we ended up choosing Himalayan Glacier to be our mountain guide. We had memories that will always remain close to our hearts. Comfortable night stays and lovely food all over and undoubtedly Shanker, the most charming, knowledgeable and funny guy ever. We will definitely book another trip in the Himalayas with you guys!”
G
5 - Excellent
Gregory's review for another Himalayan Glacier Adventure and Travel Company tour
“Himalayan Glacier left no room for disappointments! The whole trek was amazing. Guide, potters, bedrooms, food, everything was better than expected. Thank you HG team!”
J
5 - Excellent
Jessica's review for another Himalayan Glacier Adventure and Travel Company tour
“We booked a private climb with HGT/ Tony . The communication was great pre climb and during the climb. Tony always answered his phone and I never felt rushed. The staff was very accomodating and happy to make changes as needed. We finished the climb a day early and they arranged everything so we had an extra day in town. While climbing we saw other big groups/tour companies and it made me feel fortunate that I picked HGT travels! Everyone in our group summited and had an amazing trip.”
Read more Himalayan Glacier Adventure and Travel Company reviews
ITINERARY
Alt. in: ALTITUDE MAP
Expand All
WHAT'S INCLUDED WHAT'S EXCLUDED
Why Book with Bookmundi
What are customers saying about Bookmundi
Excellent
4.68 Average 349 Reviews 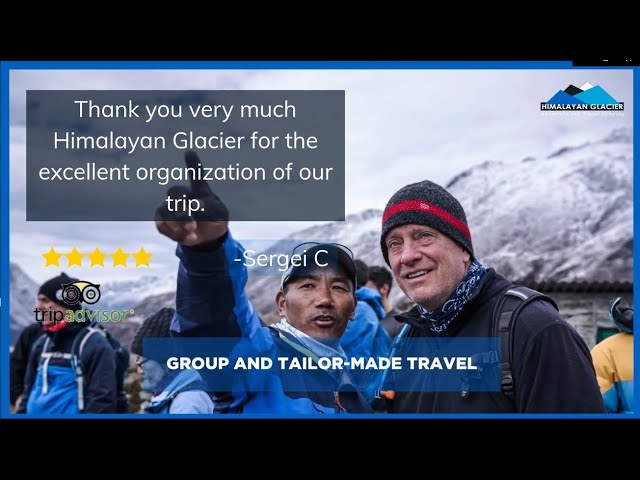 QUESTIONS AND ANSWERS Find answers to the most frequently asked questions about this tour.
Read more questions and answers
NEED HELP OR HAVE A QUESTION ABOUT THIS TOUR?
If you have any question about this tour or need help with planning a trip, please do not hesitate to get in touch with us. We're ready to help.
Get help
days 25 SavingUS$ 3,160
You have unlocked exclusive savings:
40% OFF TODAY From US$ 7,899 US$ 4,739
CHECK AVAILABILITY
Response Time: 3 hours Response Rate: 100% MAKE AN ENQUIRY