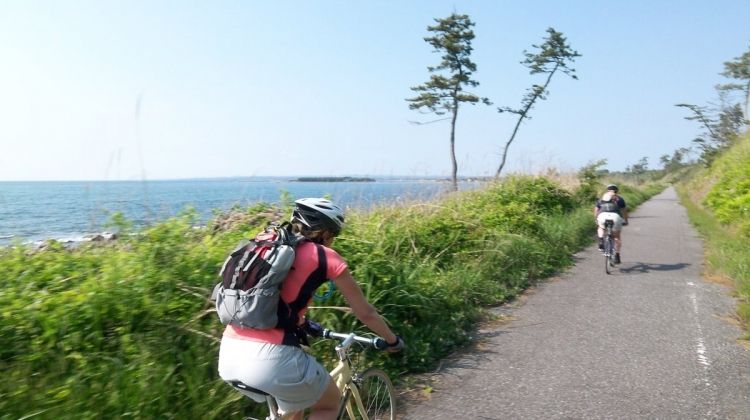 TOUR OVERVIEW
Starting in Kanazawa and ending in Takayama, the trip "Japan's Noto Peninsula" is a guided bicycle trip that takes 9 days. You will be traveling through Shirakawa, Takayama, Wajima and 5 other destinations in japan and Japan. "Japan's Noto Peninsula" is a small group trip which includes accommodation in hotels, meals and others. Please see the package includes section for further details.

Jutting out into the Sea of Japan, the remote Noto Peninsula offers a coastline of impressive seascapes to explore by bike. While the rugged western coast rises and falls, eroded as it is by wind and wave, the eastern coast enjoys a calmer shore and stunning views of the distant Nagano alpine peaks.

A protected national park, Noto Peninsula is awash with meandering hills. Perfect for those seeking an active adventure tour. Experience the magnificent sights of the bay with rocky outcrops such as the Ganmon Cave, a natural arch carved into the cliff by the tides. In Senmaida, freewheel down the hillside next to the country’s terraced rice fields as they stagger downwards to the coast. Inhale the bracing sea air at Noto Kongo, as you enjoy the peninsula’s most scenic spot.

It’s not all pedal-heavy though, unwind in the mineral hot springs to soothe sore cycling muscles. Spend the night in a thatched-roof Gassho Zukuri; historical farmhouses that have survived for over 200 years, and sample traditional mountain dishes. As we head inland, wander the narrow lanes of Takayama’s old city between wooden sake breweries and charming boutiques. And bike the cherry-blossom paths along the Oyabe River, all for a Japanese experience you won’t forget.

No additional cancellation fees apply for this Japan's Noto Peninsula tour. You can cancel the tour up to 45 days prior departure and avoid paying the full amount, but your deposit paid is non-refundable. No refund applies for cancellations within 44 days of departure.

For this Japan's Noto Peninsula tour getting the required visa(s) is the responsibility for each individual traveller, as visa requirements vary depending on your nationality. We recommend to check with your local embassies representing the countries that you are travelling to, as part of this itinerary.

Minimum Participants The minimum number of Participant for this trip is 4
NEED HELP OR HAVE A QUESTION ABOUT THIS TOUR?
If you have any question about this tour or need help with planning a trip, please do not hesitate to get in touch with us. We're ready to help.
Get help
days 09 From US$ 4,200
Unlock US$ 210 in extra savings CHECK AVAILABILITY
Response Time: 3 hours Response Rate: 100% MAKE AN ENQUIRY

Tour is operated by : SpiceRoads
1 Reviews
Currently 02:01 in Bangkok MAKE AN ENQUIRY Response Time: 3 hours Response Rate: 100%
Download Trip Notes Enter your email to get a PDF file containing all the trip information for the Japan's Noto Peninsula tour.
Trip Notes Sent
We have sent the trip notes for this tour to:

If you book the Japan's Noto Peninsula tour within the next 5 days, you can get by applying the following code: