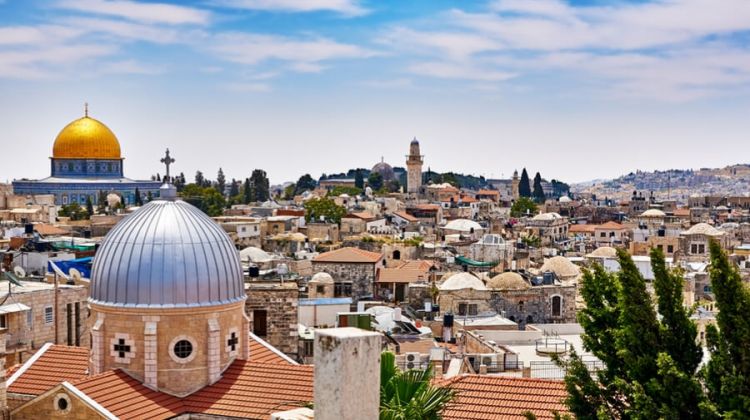 HIGHLIGHTS
Located in the Judaean Mountains, with the Mediterranean on the one side and the Dead Sea on the other, Jerusalem is one of the oldest cities in the world and holds a special significance for the followers of three major Abrahamic faiths: Judaism, Christianity, and Islam.

Join us on this ten-hour, guided tour to see the major highlights of this city. Meet your private tour guide at your hotel or accommodation in the city and get into our comfortable, air-conditioned vehicle. As you stand above the Jewish cemetery on the Mount of Olives, you will see the Old City; the Temple Mount, where once stood Solomon’s Temple that was destroyed by the Babylonians in 586 BCE; and the Second Temple, destroyed by the Romans in 70 CE. Below you is the Garden of Gethsemane, the Church of All Nations and the Kidron Valley with its ancient Jewish burial tombs.

Entering into the Old City via the Zion Gate, you will pass through the Armenian Quarter en route to the Jewish Quarter and the 1500-year-old Byzantine Cardo. Partially destroyed and unused during the Muslim conquest, this thoroughfare briefly had a new lease of life during the Crusade period.

Stop at Kotel, the Western Wall where Jews have prayed since the destruction of the Second Temple in 70 CE. Built by King Herod, the wall enclosed the Temple Mount area. The Via Dolorosa, also known as the Way of the Cross, is the route many pilgrims follow on their way to the Church of the Holy Sepulchre, which was built on the site of Jesus’ crucifixion and his burial tomb. Although the Byzantine church was partially destroyed during Persian and Muslim conquests, the rebuilt and redesigned Crusader Church preserves much of the earlier church.

Exit the Old City via the market and Jaffa Gate for a short tour of the new city. A visit to Yad Vashem, the Holocaust Museum, reveals artefacts and photographs documenting the discrimination, persecution and finally the annihilation of Jewish communities across Europe. It also honours those righteous among the nations who risked their lives while trying to save Jews.

Please note that entrance fees to the highlights are not included in the tour price. You can book this trip in different languages, including English, Spanish, French, German and Russian. Please select the language you want to book the trip in on clicking the 'Check Availability' button on the top right of this page. We will drop you back at your accommodation in Jerusalem after this trip is over.

NEED HELP OR HAVE A QUESTION ABOUT THIS TOUR?
If you have any question about this tour or need help with planning a trip, please do not hesitate to get in touch with us. We're ready to help.
Get help
hours 10 From US$ 233
CHECK AVAILABILITY
Response Time: 2 hours Response Rate: 100% MAKE AN ENQUIRY