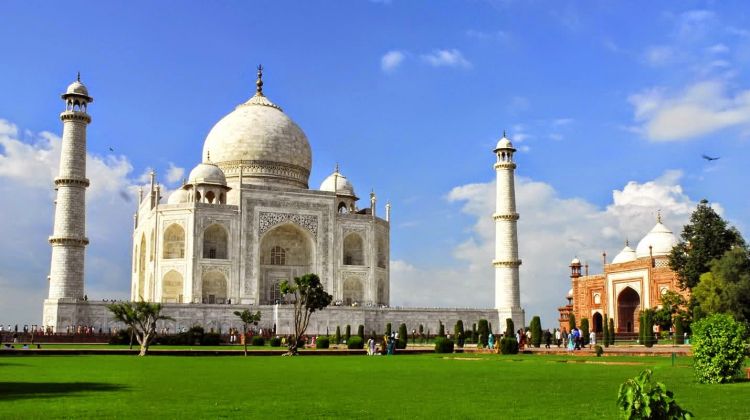 HIGHLIGHTS
Visit two of India's most famous UNESCO World Heritage sites - the Taj Mahal and Agra Fort - on a same day tour from Jaipur. See the Taj Mahal, the world's greatest monument to love in the world. Your art historian guide provides informative commentary about these iconic sites, and tops it off with a visit to the Fatehpur Sikri- the Biggest gate of the World.

On the way to Agra Stop at → "Fatehpur Sikri":which was declared a UNESCO World Heritage Site in 1986…..!

and Upon Arrival @ Agra , Enjoy a Guided tour of Spectacular places of Agra…

you will Heading towards the magical allure of The Taj Mahal we Won’t say much about it as words can’t justify its beauty, you’ve got to see it for yourself draws tourists to Agra like moths to a wondrous flame. And despite the hype, it’s every bit as good as you’ve heard.

Drive to Agra Fort (Red Fort) : - Spread over a sprawling 94 acres, this massive red sandstone fort lies parallel to the Yamuna River and situated 2 kilometers northwest of the Taj Mahal. The Agra Fort (Red Fort) was originally occupied by Sikarwar Rajputs and was later captured by Lodi rulers of Delhi. after the Lodi’s were defeated in the Battle of Panipat, the victor Emperor Babur took over the fort. After losing the fort briefly to the Suri rulers, it was eventually reclaimed by Akbar who made Agra his capital.

you can have your Lunch as per your choice of restaurant. We'll surely suggest you where to eat if you want, (Otherwise Proceed for Other Places of Interest)

Upon Arrival @ Jaipur driver will drop off you at your designated place and with lots of good memories of the tour we shall say Goodbye to you.
View More
WHAT'S INCLUDED WHAT'S EXCLUDED
Why Book with Bookmundi
What are customers saying about Bookmundi
Excellent
4.71 Average 321 Reviews

Other Practical InformationPlease provide the lead traveler's name, arrival details and passport number Jaipur - Agra 250 kilometers: 4 to 5 hours drive Approximately Please note that the Taj Mahal is closed every Friday The duration of transfers are approximate, the exact duration will depend on the time of day and traffic conditions Confirmation will be received at the time of booking Children must be accompanied by an adult Dress code is smart casual. Please be advised that short shorts or sleeveless tops are not recommended in the temple A moderate amount of walking is involved, please wear comfortable shoes A current valid passport is required on the day of travel
NEED HELP OR HAVE A QUESTION ABOUT THIS TOUR?
If you have any question about this tour or need help with planning a trip, please do not hesitate to get in touch with us. We're ready to help.
Get help
days 01 From US$ 132
CHECK AVAILABILITY
Response Time: 1 hour Response Rate: 100% MAKE AN ENQUIRY