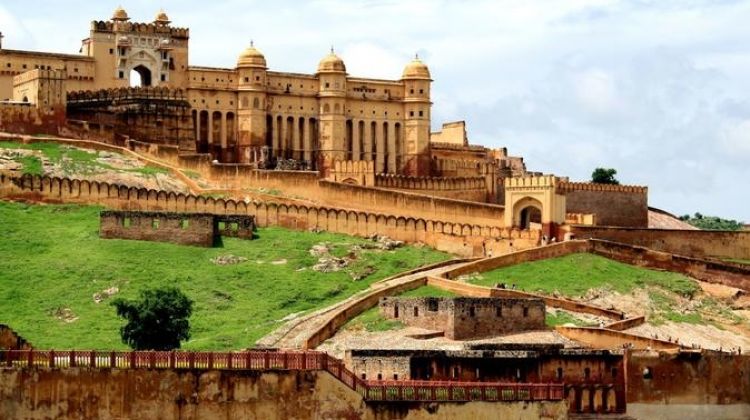 HIGHLIGHTS
Book this 8-Hour, Sightseeing Tour and see some of the major landmarks of Jaipur while enjoying a Tuk-Tuk ride. We will pick you up from your hotel, airport or train station at 8:00 am in the morning and drive you to the first destination, Hawa Mahal, probably the most famous landmark of Jaipur. This 'Palace of Winds' was built by Sawai Pratap Singh who wanted a place from where to observe the daily life of the people.

Then will take you City Palace forms one of the most famous points of interest and a major milestone in Jaipur. The beautiful development was designed by Maharaja Sawai Jai Singh during his rule. Among the various fortifications and castles of Jaipur, Town Structure is unique, with its excellent art and structure. Town Structure complicated protects a large place, which is separated into a series of home gardens, courtyards and structures. At first, Raja Jai Singh designed the external wall using a large place. The additional lavish structures were constructed later by the thriving kings.

Then will Visit you Jantar Mantar monument of Jaipur, Rajasthan is a collection of nineteen architectural astronomical instruments, built by the Rajput king Sawai Jai Singh. It features the world’s largest stone sundial, and is a UNESCO World Heritage site.

The Jantar Mantar is the largest stone astronomical observatory in the world and this feature makes it, a special destination for a traveler.

Then will Visit you Amber Fort – One of the most magnificent destinations in Jaipur, on the rugged hills outside of town sits Amer Fort. (Amber Fort). It is an example of fascinating blend of Hindu and Muslim architecture built in red sandstone and white marble. The highlight of the fort is the Sheesh Mahal (mirror Palace), a palace known for its craftsmanship in mirrors.

Then will Visit you Jal Mahal is a water palace that is situated in the midst of the beautiful Man Sagar Lake in Jaipur City. Jal Mahal is an exceptional structure of the Rajput culture. The palace and the lake around it were renovated and enlarged in the 18th century by Maharaja Jai Singh II of Amber. The wonderful five storied building built in red sandstone.

Later the driver will drop off you at your designated place and with lots of good memories of the tour we shall say Goodbye to you.
View More
WHAT'S INCLUDED WHAT'S EXCLUDED
Why Book with Bookmundi
What are customers saying about Bookmundi
Average Reviews

Other Practical InformationConfirmation will be received at the time of booking Children must be accompanied by an adult Each traveler is allowed a maximum of 1 suitcase and 1 carry-on bag. Carrying more might invite certain restrictions. Please inquire before your tour starts The dress code for this trip is smart casual. Please be advised that shorts or sleeveless tops are not recommended A moderate amount of walking is involved; comfortable walking shoes are recommended A current, valid passport is required on the day of travel
NEED HELP OR HAVE A QUESTION ABOUT THIS TOUR?
If you have any question about this tour or need help with planning a trip, please do not hesitate to get in touch with us. We're ready to help.
Get help
hours 08 From US$ 20
CHECK AVAILABILITY
Response Time: 2 hours Response Rate: 100% MAKE AN ENQUIRY