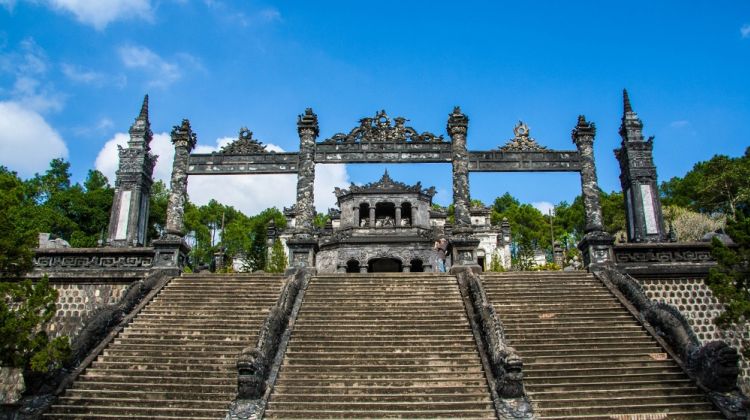 HIGHLIGHTS
Start this Hue city tour at 8am, when your guide and driver pick you up at your hotel. Our first stop will be Dong Ba Market where you can shop and catch a glimpse the daily lives of local people.

Next, take a boat trip to Thien Mu pagoda – the historic pagoda on the banks of the Perfume River. Apart from the scenic riverside and hilltop location, the Thien Mu Pagoda and area is rich in history, standing witness to almost four hundred years of tumultuous nation-building in Vietnam.

Head back to Hue City for the rest of the tour. The massive Kinh Thanh Citadel is the most well known and iconic site in Hue. Begun in 1805 by Emperor Gia Long, it is a sprawling complex comprised of the Imperial City, several museums, lakes, and lovely gardens, all laid out in a series of concentric circles.

We also visit the Forbidden Purple City, originally built in the early 1800s for the personal use of the emperor and staffed by eunuchs who posed no threat to the royal concubines. We'll then head to Hue Royal Antiques Museum to see a collection of ornaments from the Nguyen Dynasty.

After lunch, visit the magnificent and formal Minh Mang Tomb and see how its architectural design harmoniously blends with the natural surroundings.

Last stop today will be Khai Dinh Tomb, symbolic of the decline of Vietnamese culture during the colonial era. Unlike Hue’s other tombs, the grandiose concrete structure, built between 1920 and 1931, is a synthesis of Vietnamese and European elements. Even the stone faces of the Mandarin honour guards are endowed with a mixture of both features.

The tour finishes at your hotel at 5 pm.

NEED HELP OR HAVE A QUESTION ABOUT THIS TOUR?
If you have any question about this tour or need help with planning a trip, please do not hesitate to get in touch with us. We're ready to help.
Get help
hours 08 From US$ 68 See Group Discount
CHECK AVAILABILITY
Response Time: 2 hours Response Rate: 100% MAKE AN ENQUIRY