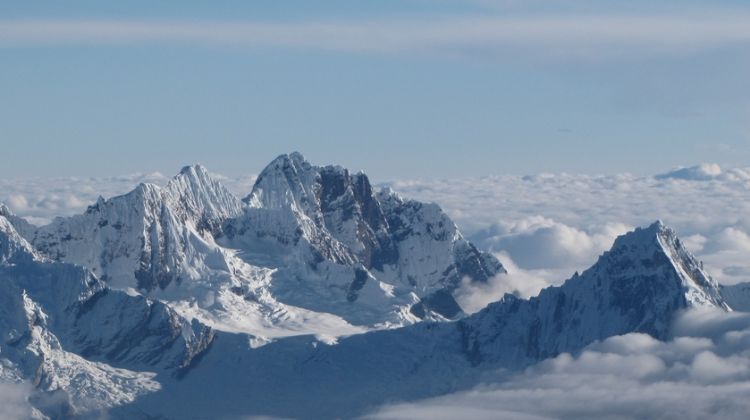 HIGHLIGHTS
Join us on this seven-day trek and climb Mount Pisco as well as Mount Chopicalqui, two of the highest mountains in the Cordillera Blanca in the Peruvian Andes. Popular among more seasoned climbers heading out to conquer higher peaks in the Cordillera, these peaks, nonetheless, provide excellent opportunities for those starting out in the field to test their skills and a unique experience for those just wanting to give climbing a try.

Mount Pisco, at 5,750 m, is one of the easiest mountains to scale in the Cordillera Blanca and is widely preferred as a break-in route for acclimatisation by climbers before moving onto one of the higher peaks. At the summit, you are rewarded with magnificent views of the Cordillera Blanca as well as North and South Huascaran, the highest mountain in Peru, at 6,768 m.

Mount Chopicalqui, part of the Huascaran Massif, is also located in the Cordillera Blanca. With an elevation of 6,345 m, it is the fifth highest mountain in the department (administrative region) of Ancash, and the fourth highest in the Cordillera Blanca. It is a demanding mountain that requires some technical climbing and previous climbing experience.

Starting from Huaraz, this trip will take you to the top of Mount Pisco on Day 2. You will hit the trail for Mount Chopicalqui next, trekking past its base camp and moraine camp to reach the top. Retrace your steps back to the base camp upon conquering Mount Chopicalqui arriving in Huaraz at around 5:00 pm on the last day of the tour.

For more details, please go through the itinerary below.
View More
CUSTOMER REVIEWS ABOUT UNU RAYMI EXPEDITIONS
5 - Excellent
Based on 8 reviews
Review for another Unu Raymi Expeditions tour
5 - Excellent
“We had a great time! The trek was perfectly custom tailored to our needs.

We have left Puerto Natales and still travelling. Thanks again for helping plan a memorable trip for us. We are grateful to have experienced the beauty of TdP.”
Unu Raymi Expeditions responded to this review on 05 Mar 2020: “Hi Katherine, many thanks for your comments regards the trek we designed for you in Torres del Paine, it was a pleasure having you both with us.
Please keep in touch and we hope to see you again another year! best regards, James”
Kristi's review for another Unu Raymi Expeditions tour
5 - Excellent
“Amazing trip! Have not done much traveling outside the U.S., so was a bit nervous. Our travel specialist was James Mackender, and he made us feel very at easy with traveling abroad in Peru. Everything was perfectly planned--flights, pick-ups and drop-offs. Our guide for the Treehouse Lodge/Iquitos was Guido. Very knowledgeable, spoke excellent english, friendly, very personable. The Treehouse Lodge was beautiful, and the day and night excursions were once in a lifetime. Our next part of our Journey in Peru was seamless--the guide from the Treehouse took us directly to the river boat. The 7 man crew on the Spondias was amazing. They were so attentive, knowledgable about the amazon and Peru. My favorite part of this portion of the trip was when we spent time with a local family at the river village. They invited us into their home, we shared some food, and discussed the commonalty and differences of our daily lives. Our guide on the Spondias was Charlie, and he likes birds and was very knowledgeable about the different species of birds. Our chef, Francisco, was wonderful and his creations were excellent. Our waiter/purser was Jairo, he was a friendly young man, full of knowledge and we practiced english and spanish together. The only flaw was that we missed our connecting flight in Lima to Cusco. After an hour of being sent to 5 different desks to get our flight rescheduled, one phone call to James and in 10 minutes the whole situation was remedied. It relieved so much stress to know that James was looking after us. The last stretch of our trip was to Cusco and Machu picchu, and Zac was our guide. Zac was, hands down, the best guide I have ever had. He was so knowledgeable about Peru, Cusco, Incan history, Machu Picchu. The way he introduced us to Machu Picchu was perfect, and he even took video of our initial reaction to seeing this Wonder of the World. He was so kind, so enthusiastic, I definitely would do another trip with him as our guide.

This trip was just perfect. James did an amazing job listening to what we wanted to do, and making all of those wishes come true. Will definitely be using James again when we travel!!”
Unu Raymi Expeditions responded to this review on 01 Oct 2019: “Hi Kristi, thanks for your comments & it's great to hear about your trip. Peru is an awesome country & I think you've experienced some of the best of it! It was a pleasure to have you both with us and look forward to keeping in touch, best James”
Jennifer's review for another Unu Raymi Expeditions tour
5 - Excellent
“I was very keen to trek in Cotahausi Canyon, an isolated area 8 hours travel by bus from Arequipa, and well away from general tourist attractions. I had contacted many trekking companies from Arequipa and Cusco but most were only interested in taking me to Colca Canyon, a popular and closer option. Through Bookmundi, I was lucky enough to contact James Mackender, Unu Raymi Expeditions, who was willing to look into the possibility of arranging flexible trekking options for me from the township of Cotahuasi, in Cotahuasi Canyon. James also organised the guide from Arequipa as well as accommodation, meals, bus and plane fares.

I travelled with my guide in a bed bus from Arequipa to Cotahausi and at 5:00 am the next morning we caught a collectivo to start the first trek. All travel to the distant little villages in the Canyon was by local collectivos and the guide used his knowledge of the timetables to catch the collectivos on their return journeys. Travelling with local people was an extremely interesting glimpse into everyday life.

One morning we caught a bus at 3:00 am to travel to Puyca to walk up to the Wari ruins high above the village at the Archaeological site of Maucallacta, 3925 metres: such a peaceful, pre Inca site high up against the heights of the Canyon overlooking ancient terraces that swept down to the bottom of the valley. There was even a stone bathing area that we recognised as an Inca addition.

Cotahausi Canyon is extremely beautiful, remote, diverse and unspoilt with many interesting attractions to walk to including the impressive tall Cactus Forest and Sepia Falls. One very cold morning we travelled to a village called Huaynacotas high up on the sides of the Canyon. It had snowed the night before and a volcanic crater and the ridges above the snow line were dusted with white. After walking along the ridge road to enjoy the view along the canyon, we took five hours to walk on a narrow track down to the river and then on to Luicho to splash in the local thermal pools.

Cotahuasi Canyon is an amazing place to trek and I am very grateful to James and my guide that I was given the opportunity to have such an authentic experience.”
Unu Raymi Expeditions responded to this review on 22 Oct 2019: “Hola Jenny! Many thanks for your detailed review, it was a real pleasure to have you with us and helping you to plan and operate your trip. I'm absolutely delighted we could setup Cotahuasi Canyon for you, because it is remote but also a really beautiful place. The thrill of the adventure is what we enjoy the most and knowing we helped you get the most from your trip is awesome. Thanks Jenny, I know we'll keep in touch and would be great to see you back someday!”
Read more Unu Raymi Expeditions reviews
ITINERARY
Alt. in: ALTITUDE MAP
Expand All
WHAT'S INCLUDED WHAT'S EXCLUDED
Why Book with Bookmundi
What are customers saying about Bookmundi
Excellent
4.71 Average 312 Reviews

NEED HELP OR HAVE A QUESTION ABOUT THIS TOUR?
If you have any question about this tour or need help with planning a trip, please do not hesitate to get in touch with us. We're ready to help.
Get help
Black Friday SUPER SALES UNLOCK DEALS
days 07 From US$ 1,550
Unlock US$ 78 in extra savings CHECK AVAILABILITY
Response Time: 3 hours Response Rate: 100% MAKE AN ENQUIRY