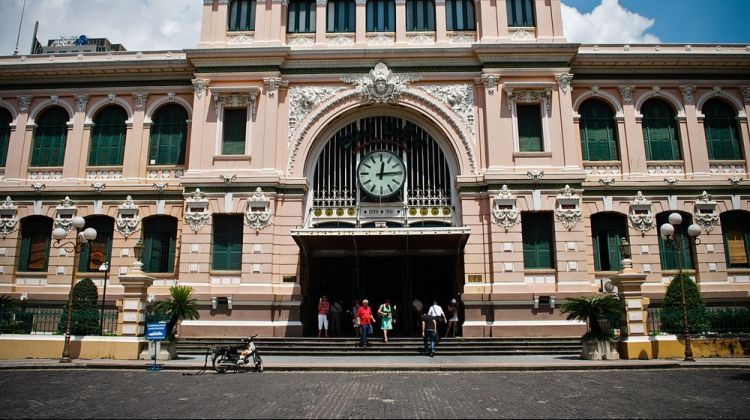 In the morning, the tour starts with a visit to the imposing Dong Khoi Street (formerly Rue Catinat). Pass by classic European-style landmarks such as the ornate City Hall (Hotel de Ville). Next, we will go to the Notre Dame Cathedral, the most famous landmark in Vietnam, as the twin bell towers can be seen from a long distance. In the same square is the famous Saigon Post Office, the largest functioning post office in Vietnam. What makes this post office so extraordinary is that it was designed and built by Gustave Eiffel who also designed and built the Eiffel Tower and Statue of Liberty. It is a building not to be missed.

Afterwards, dive into modern history with a tour of the Reunification Palace. Formerly the Independence Palace of the South Vietnamese president, this 60s style building was famously stormed by tanks on April 30, 1975, signifying the fall of South Vietnam. It has been preserved in its original state, and the original tanks remain on display near the entrance gates. Continue to the harrowing War Remnants Museum, which comprehensively documents the travails of the long Vietnam – American War. Inside are detailed photographic exhibitions; outside is a collection of tanks, planes and weapons. A powerful experience, this museum is guaranteed to provoke strong emotions.

In the afternoon, we head out to Cho Lon (Chinatown). Explore the highlights of this fascinating area, beginning with a brief visit to Binh Tay Market, the vast wholesale market selling every kind of goods. Continue to visit Thien Hau Temple, built by the Cantonese congregation and dedicated to the heavenly goddess. End your tour at the central Ben Thanh Market, where vendors display a vast array of goods and handicrafts, appealing to every taste.

NEED HELP OR HAVE A QUESTION ABOUT THIS TOUR?
If you have any question about this tour or need help with planning a trip, please do not hesitate to get in touch with us. We're ready to help.
Get help
hours 08 From US$ 65 See Group Discount
CHECK AVAILABILITY
Response Time: 1 hour Response Rate: 100% MAKE AN ENQUIRY