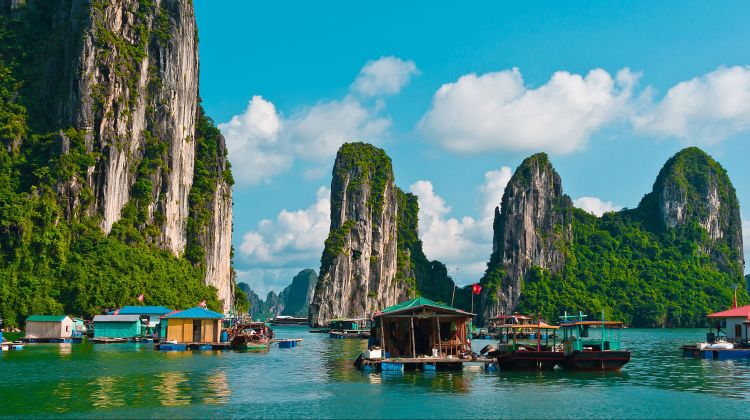 HIGHLIGHTS
At 8 am, you will be picked up at your hotel in Hanoi for the 3.5-hour drive east of the capital to reach Halong City, the gateway to Halong Bay. Along the way, you will see relaxing views of the countryside and the ubiquitous farmers tending their rice paddy fields.

In Halong, you will get on board a traditional junk and set sail around this gorgeous bay, declared a UNESCO World Heritage site in 1994. The cruise will let you have a close look at many of the magnificent rock formations and isles of various shapes and sizes. You continue enjoying the spectacular natural scenery while savoring a delicious seafood lunch on board.

You will visit one of the many beautiful grottoes, Dong Thien Cung (Heavenly Palace Grotto), which is located on a distant island in the bay. As the name suggests, the cave is beautified with thousands of stalactites and stalagmites. Colorful lights transform the scenic place into a fairy-tale palace. You can also explore Dau Go Cave, which is known for the history of Vietnam’s fight against Mongolian invasion in the 13th century. Thien Cung and Dau Go are remnants of the same old cave system. They both survive in the northern part of Dau Go island at between 20m and 50m above sea level.

Then you will resume cruising to the southern part of Halong Bay, where you can see many strange-shaped islands, pay a visit to the colorful floating village of local fishermen, as well as do kayaking to explore distant parts of the bay.

Afterwards, you will be sailing back to Halong wharf, where a private car that will take you to Hanoi is waiting. You will arrive at your hotel around 8 pm.
View More
WHAT'S INCLUDED WHAT'S EXCLUDED
Why Book with Bookmundi
What are customers saying about Bookmundi
Excellent
4.71 Average 318 Reviews

NEED HELP OR HAVE A QUESTION ABOUT THIS TOUR?
If you have any question about this tour or need help with planning a trip, please do not hesitate to get in touch with us. We're ready to help.
Get help
hours 12 From US$ 120 See Group Discount
CHECK AVAILABILITY
Response Time: 3 hours Response Rate: 100% MAKE AN ENQUIRY