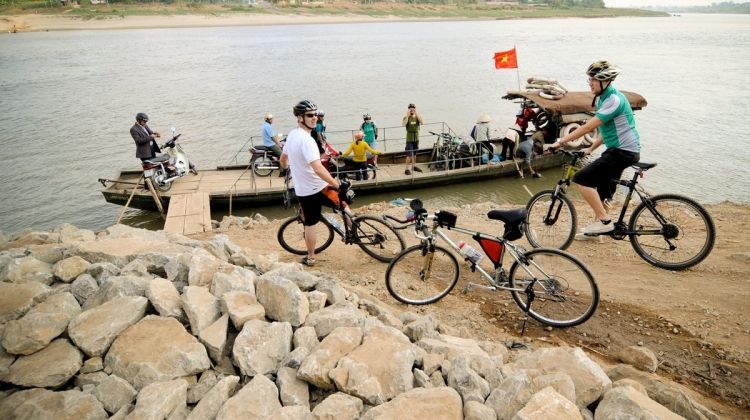 Leave the chaos of Hanoi behind for a day as you cycle through farmlands and villages surrounding the city. On this Hanoi bicycle tour, we cycle on the banks of the Red River on a quiet farm road passing through flower and vegetable gardens, traditional village lanes, and alongside lotus lakes to give you a whole new view of Vietnam’s capital city. You’ll be surprised at how little traffic we’ll encounter as your tour guide brings you to a side of Hanoi that’s well off the beaten path.

We start our Hanoi day tour bright and early! At 8:30 am we take a short transfer from your hotel to our bike garage, hop on our mountain bikes, and head down hidden back alleys to see where the real Hanoi lives. After winding our way through we leave the concrete of the city behind to open farmland along the banks of the Hoang Giang River. We visit a broom making village as we head towards Co Loa, an ancient spiral-shaped citadel that dates back to the third century BC.

After riding around the citadel and a stop at An Duong Vuong King Temple we'll have a break for a local lunch. We next cycle on top of the dike along the Red River, named for the reddish-brown heavily silt-laden water, where we will see where two great rivers meet. We ride along the water’s edge to one of the most important places of worship in Hanoi,Tay Ho temple, and learn the legend of the golden buffalo calf. We’ll pedal on through quiet back streets, admiring the colonial architecture, before transferring you back to your to your hotel around 3 pm.

To make sure we don’t miss an important cultural event, this itinerary may be adjusted if there is a festival or other special activity nearby.

No additional cancellation fees apply for this Hanoi Explorer tour. You can cancel the tour up to 45 days prior departure and avoid paying the full amount, but your deposit paid is non-refundable. No refund applies for cancellations within 44 days of departure.

For any tour departures within 27 July 2021, full payment is required. For tours that depart later than 27 July 2021, a deposit of 25% is required to confirm this tour, and the remaining balance will be charged 44 days before trip departure.

For this Hanoi Explorer tour getting the required visa(s) is the responsibility for each individual traveller, as visa requirements vary depending on your nationality. We recommend to check with your local embassies representing the countries that you are travelling to, as part of this itinerary.

Minimum Participants The minimum number of Participant for this trip is 2
NEED HELP OR HAVE A QUESTION ABOUT THIS TOUR?
If you have any question about this tour or need help with planning a trip, please do not hesitate to get in touch with us. We're ready to help.
Get help
day 01 From US$ 120
Unlock US$ 6 in extra savings CHECK AVAILABILITY
Response Time: 3 hours Response Rate: 100% MAKE AN ENQUIRY

Tour is operated by : SpiceRoads
1 Reviews
Currently 13:04 in Bangkok - Open Now MAKE AN ENQUIRY Response Time: 3 hours Response Rate: 100%
Download Trip Notes Enter your email to get a PDF file containing all the trip information for the Hanoi Explorer tour.
Trip Notes Sent
We have sent the trip notes for this tour to:

If you book the Hanoi Explorer tour within the next 5 days, you can get by applying the following code: