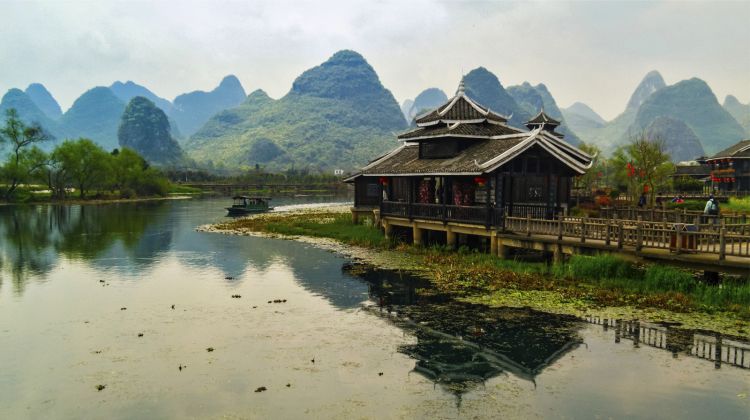 HIGHLIGHTS
A cruise along the Li River is a truly unforgettable experience, especially when paired with a visit to one of the most famous caves in China. This 8-hour, guided tour starts with a pick up at your hotel in Guilin city centre and transfer to the boat that will take you on a Li River cruise.

Soak up a landscape that seems to have come straight out of a movie and take in the stunning scenery. There’s something interesting to see at almost every bend in the river. Most karst formations on the river, when combined with a little imagination, remind one of animals and objects and carry names like Elephant Trunk Hill, Sword Cut Cliff and Reclining Flower Vase Hill.

Along with these spectacular limestone peaks, you’ll also see graceful bamboo groves, farmers tending to rice paddies and lumbering water buffaloes pulling carts or cooling off in the river. You may also see fishermen gliding along on their narrow bamboo rafts.

You have the option to enjoy a traditional Chinese lunch while cruising on the river before deboarding the boat in Yangshuo. Once there, you will have some time to stop at the market to pick up some things for yourself or souvenirs for friends or family. Then your guide will take you on a walking tour of West Street, a tiny, S-shaped road that travels through an expat colony, hence the name. The street itself has over 1,400 years of history.

On the way back to Guilin, you will have the chance to visit the Reed Flute Cave, a famous destination that has now become part of almost every Guilin travel itinerary. The cave got its name from the verdant reeds growing outside of it, which were used by the locals to make flutes. Inside this water-eroded cave is a spectacular world of stalactites, stone pillars and rock formations created by carbonate deposits. Illuminated by colorful lights, the fantastic spectacle is found in many variations along this 240-meter-long cave.

Other Practical InformationPassport copy must be provided when making the reservation to buy the Li river cruise tickets. Passport is hence required on the travel date Li river Cruise we book is 3 star cruise.
NEED HELP OR HAVE A QUESTION ABOUT THIS TOUR?
If you have any question about this tour or need help with planning a trip, please do not hesitate to get in touch with us. We're ready to help.
Get help
hours 08 From US$ 140 See Group Discount
CHECK AVAILABILITY
Response Time: 3 hours Response Rate: 100% MAKE AN ENQUIRY