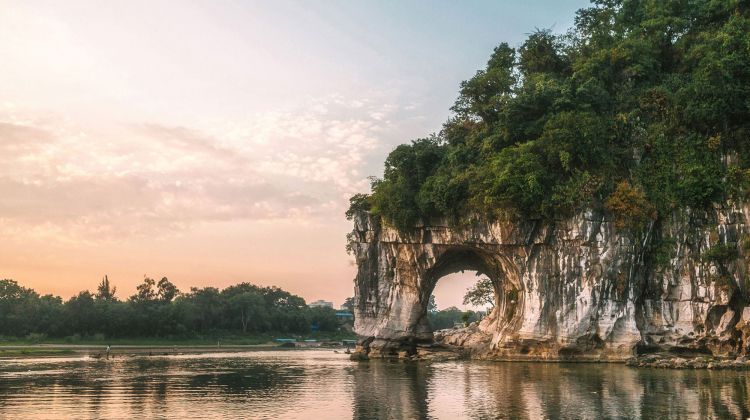 HIGHLIGHTS
Guilin is unmistakable with its striking hills, unique karst topography and serene rivers, and is also home to unique culture and tradition. This guided tour covers most of the famous attractions in Guilin: Reed Flute Cave, Fubo Hill, Seven Star Park and Elephant Trunk Hill.

On this tour, you'll be able to see the highlights of Guilin within a short duration and make friends with travelers from around the world.

Your tour begins early in the morning. Your tour guide and driver will pick you up from your Guilin downtown hotel at around 7-8 am, based on your hotel location, and drive you to the magnificent natural wonders in Guilin.

Regarded as Nature's Art Palace, the Reed Flute Cave is renowned for its marvelous stalagmites, stalactites, stone columns, stone curtains and stone flowers. With the help of lighting facilities, the cave looks even more majestic.

Continue to explore the Fubo Hill and Elephant Trunk Hill. They both have their own unique attractions. Half of the Fubo Hill stands in the river and the other half of it is on land. On the other hand, the Elephant Trunk Hill looks like a giant elephant drinking water from the river. The hill is 55 metres high, 108 metres long, 100 metres wide and has an elevation of 200 meters above sea level. It is the symbol of Guilin and its karst landscape.

Then visit the Seven Star Park named for the seven peaks in the park laid out in the form of the Big Dipper. It is endowed with elegant mountains, clear water, miraculous stone forest, deep and serene valleys, plentiful animals and plants and valued cultural relics. You may spend a leisurely time here.

At the end of the tour, you will be transferred back and dropped off at your hotel.
View More
WHAT'S INCLUDED WHAT'S EXCLUDED
Why Book with Bookmundi
What are customers saying about Bookmundi
Excellent
4.69 Average 364 Reviews

Other Practical InformationA minimum of two people per booking is required. A current valid passport is required on the day of travel. The duration of transfer is approximate and will depend on the traffic conditions. Please provide your hotel name, address and phone number at time of booking.
NEED HELP OR HAVE A QUESTION ABOUT THIS TOUR?
If you have any question about this tour or need help with planning a trip, please do not hesitate to get in touch with us. We're ready to help.
Get help
hours 09 From US$ 120
CHECK AVAILABILITY
Response Time: 1 hour Response Rate: 100% MAKE AN ENQUIRY