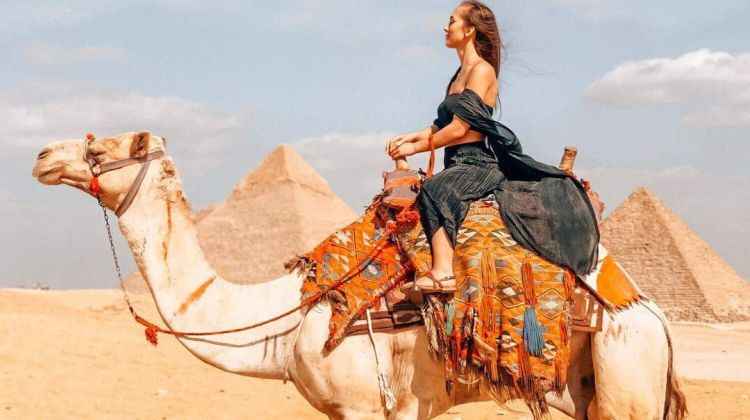 HIGHLIGHTS
Grab this opportunity to visit some of the major highlights of Egypt on a one-day tour. Enjoy a pickup service at the hotel and travel to your first destination, the Pyramids of Giza. Don't miss out on exploring three of the most famous pyramids, Cheops, Chephren and Mykerinus. Proceed to visit the Great Sphinx and travel next to the Valley Temple.

Drive to the famous step pyramid of Zoser, the oldest major stone structure in the world, which was built 4800 years ago by King Djoser. Visit the Tombs of the Nobels in Sakkara and learn more about the daily life of ancient Egyptian noblemen.

Have a traditional lunch at local restaurant. After that, transfer to the city of Memphis, which was founded by King Mina and was the capital of Egypt during the Old Kingdom. This place was considered to be the centre of politics and culture in Egypt for over 3000 years. See the statue of Ramses II and the alabaster sphinx of Queen Hatshepsut in Memphis.

Enjoy the service of a trained egyptologist throughout the duration of the tour. Drive back to your accommodation after the tour is over.

View More
CUSTOMER REVIEWS ABOUT LOOK AT EGYPT TOURS
5 - Excellent
Based on 59 reviews
Review for another Look at Egypt Tours tour
5 - Excellent
“Everything about this trip was perfect, planes on time, all vehicles where on time, all people in charge where on time specially Ms.Randa our guide in Cairo and Muhammed our guide on the cruise , food was top notch, Hotels where perfect, everything was worth every cent payed. I would tell anybody to go to Egypt and go with Look at Egypt tours the team goes beyond just a good trip but a absolute perfect trip.Look at Egypt tours should be very proud of its Organization. Thank you.”
Wilcznski's review for another Look at Egypt Tours tour
5 - Excellent
“Egypt was on my bucket list for the longest time. We got a reference about Look at Egypt Tours and from the word go, they were there to assist us in our holiday plans in every way.if you are fascinated by ancient history of Egypt is the place.so much to explore and be mesmerized by these People who walked this very earth 4000 years ago.and the legacy they left behind mind blowing. The guides of look at Egypt tours Muhammed made the places more interesting with history and anecdotes. Ahmed as operator guided us with the itinerary and was flexible to accommodate all our requests.from the time we landed in Cairo. They assisted us with passport control to a mobile phone drinking water and every little detail that made the holiday very enjoyable and stress free.I would most certainly recommend Look at Egypt tours thank you for a wonderful and memorable holiday of the most fascinating country I have witnessed.My heart feels delighted as I tick off Egypt from my bucket list..”
Marlon's review for another Look at Egypt Tours tour
5 - Excellent
“My husband and I had planned for several years to do a comprehensive private tour to Egypt Working with Look at Egypt Tours was easy and they were very flexible. On every step from arrival to departure all the entire trip.
We arrived in Cairo from our flight in very late evening, and were met by our tour leader Tarek , who moved us promptly through customs and got our visa's. All a part of the prepaid trip. Then we were taken to the Ramses Hilton Hotel.
Importantly, our guides and drivers always on time, Sometimes they had to wait for us to do something or study another thing carefully and they were always happy to wait for us to be ready to move on.
In Cairo, we visited the great Pyramids, Sakkara and Coptic Old quarter as well as all the regular other sites. Our Nile cruise from Luxor to Aswan was fantastic Steinberger Minerva the boat was very modern, food was testy and staff was the best.
we recommend treasures of Egypt because it will allow you discover many temples and tombs and Abu simble so it is the best for you specially if this is the first time in Egypt.
So my advice is if you want make the best of your time in a country like Egypt so you should go with a tour company and I recommend Look at Egypt Tours they will work with you and will not drop the ball. They will get you safely around and help you stay well and give you great information wherever you are on your visit. So on our custom trip, the price was great, with good value for the money. We had 2 guides, one in Cairo and other one on the cruise, and several drivers all made us feel safe and comfortable. If you book with Memphis and let them help you they will deliver one of your best vacations ever!”
Read more Look at Egypt Tours reviews
WHAT'S INCLUDED WHAT'S EXCLUDED
Why Book with Bookmundi
What are customers saying about Bookmundi
Excellent
4.71 Average 318 Reviews

NEED HELP OR HAVE A QUESTION ABOUT THIS TOUR?
If you have any question about this tour or need help with planning a trip, please do not hesitate to get in touch with us. We're ready to help.
Get help
hours 07 From US$ 100 See Group Discount
CHECK AVAILABILITY
Response Time: 1 hour Response Rate: 100% MAKE AN ENQUIRY