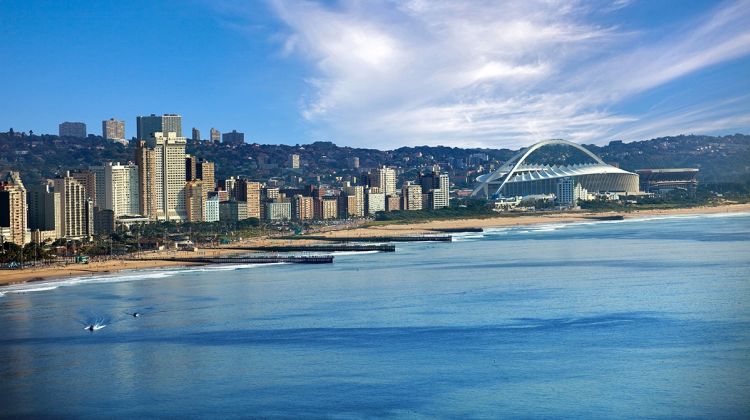 HIGHLIGHTS
Embark on a scenic, guided full day tour of Durban’s top 10 sites! An experienced and knowledgeable local guide will show you a variety of landmarks which highlight Durban’s diverse culture and history.

Gandhi’s house, situated in Inanda township, now stands as a museum dedicated to his 21 years in South Africa. Gandhi himself said South Africa was essential to his personal achievements. The racial oppression he felt during the 21 years he spent in South Africa shaped his future. In 1904 Mahatma Gandhi established a settlement at Phoenix devoted to his principles of Satyagraha [passive resistance] and printed his newspaper, the Indian Opinion was printed.

After Gandhi’s home, the tour will then include a drive through Inanda Township before progressing to Umhlanga Promenade and the pier.
At Victoria Street Market, you will be given time to shop for African inspired accessories, clothing, souvenirs, home decorations, paintings and luggage etc.

The Moses Mabhida stadium has become a defining feature of the Durban skyline. It has a high-rise platform on top of its arch which is accessible by an elevator called the Sky Car for an additional fee. Your tour guide will show you around the exterior of the stadium and will give you time to go to the sky platform if desired.

The tour also includes a visit to uShaka Marine World’s Village Walk on the famous Golden Mile Beachfront on Durban’s OR Tambo parade. There you will be given time to shop and have lunch. uShaka Village Walk is home to Durban’s most unique shopping experiences, offering a shopper’s paradise in an open-air environment, affording guests a world of entertainment, family fun, shopping and dining.

The KwaMuhle Museum was once the headquarters of Durban’s Native Administration Department and the centre of Durban’s harsh system of labour control. Now it has been transformed into Durban’s Apartheid Museum that seeks to reflect Durban’s urban growth and the history of its residents.

Other Practical Information*All ages are welcome * German and Polish languages can be requested (on request) *After 15:00 PM , please immediately contact Mr Sotiris on +27 82 7766 771 / Bongani +27 766 066 028 / Christo +27 82 7766 787 by phone or WhatsApp, the day before the trip. *If the last minutes booking is before 15:00 PM , kindly contact by email: info@zulusafaris.com
NEED HELP OR HAVE A QUESTION ABOUT THIS TOUR?
If you have any question about this tour or need help with planning a trip, please do not hesitate to get in touch with us. We're ready to help.
Get help
hours 08 SavingUS$ 4
You have unlocked exclusive savings:
5% OFF TODAY From US$ 82 US$ 78 See Group Discount
CHECK AVAILABILITY
Response Time: 3 hours Response Rate: 100% MAKE AN ENQUIRY