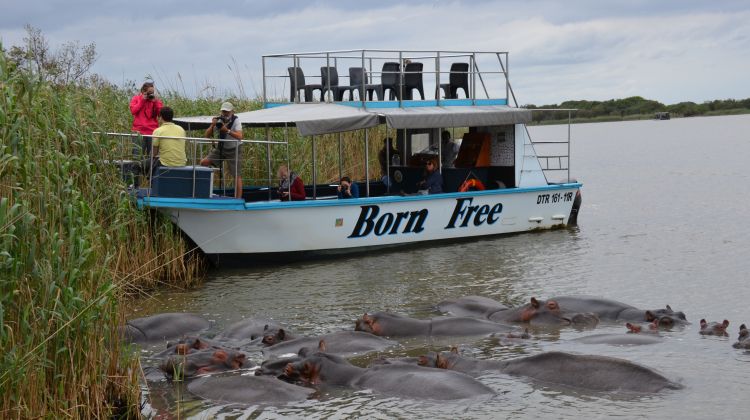 HIGHLIGHTS
The tour departs from Durban heading northward along the coast to northern KwaZulu-Natal. The first stop is the town of St Lucia and the estuary inside the iSimangaliso Wetlands Park. There you will board a riverboat for a 2-hour guided tour of the estuary. The local guide will inform you of the reserves history and its incredible wildlife.

Previously known as the Greater St. Lucia Wetland Park, iSimangaliso Wetlands Park was declared South Africa's first Natural World Heritage Site (UNESCO) and is considered South Africa's third largest park with 280km of near pristine coastline and 328 000 hectares of magnificent scenery. The protected area is home to one of the largest population of hippopotami in SA, an estimated 1000 crocodiles as well as a wealth of plant, bird and animal life. The park was proclaimed a world heritage site because of the rich biodiversity, unique ecosystems and natural beauty occurring in a relatively small area. Animals occurring in the park include lion, African elephant, leopard, black and southern white rhino, buffalo and in the ocean, whales, dolphins, and marine turtles including the leatherback and loggerhead turtle.

After the boat tour, you will travel to the Hluhluwe-Imfolozi Game Reserve. Your experienced guide will show you around the park in search of the diverse wildlife and big 5.

Hluhluwe-Imfolozi Game Reserve is set in the heart of Zululand where Africa’s Big 5 roam the flourishing savannah. The Park contains an immense diversity of fauna and flora and is characterised by hilly topography. The list of animals at the park is long and varied. Today, the Hluhluwe Imfolozi Park is world-renowned for its White Rhino conservation and its Centenary Capture Centre is setting exceptional standards for animal capture and sustainable utilization in Africa.

Your guide will stop at Hilltop Camp restaurant giving you time to refuel and relax. The restaurant is situated at the top of the hill and gives visitors the chance to enjoy the scenery of the camp and surrounding areas. Afterwards, you will continue with your safari before leaving the park for Durban.

Other Practical InformationDeparture/return location: pickup & drop off service within a 5km radius of Tropicana Hotel, 85 OR Tambo Parade. Departure time: 06:30 am Return time: 07:00 pm Wear: comfortable clothing and shoes, hat, sunscreen, jacket. Location: Hluhluwe Imfolozi game reserve Age: all ages welcome Dates: all year round Traveller type: single or per person sharing *German and Polish languages can be requested (on request)
NEED HELP OR HAVE A QUESTION ABOUT THIS TOUR?
If you have any question about this tour or need help with planning a trip, please do not hesitate to get in touch with us. We're ready to help.
Get help
hours 12 From US$ 250 See Group Discount
CHECK AVAILABILITY
Response Time: 3 hours Response Rate: 100% MAKE AN ENQUIRY