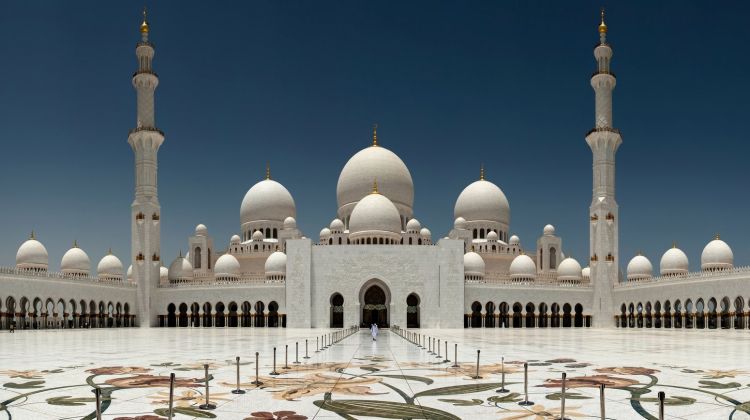 HIGHLIGHTS
Marvel at the beauty of the United Arab Emirates’ capital – Abu Dhabi. Also known as one of the riches cities in the Middle East and the world’s largest producer of oil. It is also home to the world’s most expensive hotel, the famous Emirates Palace.

This amazing tour starts with a pick up from your hotel and an approximately 2-hour drive south. On the way to Abu Dhabi you will pass through an industrial area called Jebel Ali free zone. Once you reach Abu Dhabi’s border you will see several stunning plantations all along the wayside and superb villages in the city.

The first stop will be at Sheikh Zayed Grand Mosque, the 3rd largest mosque in the world and one of the best architectural landmarks of the capital. The mosque also features an exceptional collection of marble works and the largest carpet in the world, designed by Iranian artists.

You will see the Cultural Foundation, and a close walk away is Qasr Al Hosn (meaning ‘White Fort’), the oldest stone building in the city. Continue the drive to admire the panoramic view of the Al Bateen District where the ‘Presidential Palace’ is situated. A visit to Heritage Village will follow.

Moving on to the next stop toward the breakwater and your chance to capture the city’s skyline and probably take a snack or lunch. Then drive ahead towards Abu Dhabi Corniche.
On the way back to Dubai, bypass through Abudhabi Yas Island and Formula-1 racing circuit.

Enjoy the memorable day!
View More
CUSTOMER REVIEWS ABOUT SAIFCO TRAVEL AND TOURISM LLC
4.5 - Excellent
Based on 17 reviews
L
5 - Excellent
Loren's review for another Saifco Travel and Tourism LLC tour
“Desert safari is one of the must tour to do while visiting Dubai. we were lucky enough to book this tour with Saifco. The experience was awesome and thrilling. The guide was very informative and friendly. The dune drive made us crazy scary but later on enjoyed till the last minute taking photos with the sunset. There was an awesome BBQ dinner with belly dance and the other dances. We had henna tattoo on our arm and looks fun. All are excellent and we enjoyed a lot. Eat less food before going for desert safari as some might vomit during the bumpy ride in desert. I suggest you let Saifco Travel arrange for your Desert Tour. Highly Recommended”
Saifco Travel and Tourism LLC responded to this review on 27 Feb 2021: “Hi,


Thank you for taking the time to provide an amazing rating for our Best Desert Safari Dubai with Buffet Dinner, Sand Boarding & Camel Ride, your opinion is valued greatly and it helps us maintain excellent standard of service to our customers.

The team here at Saifco Travel and Tourism is thrilled to hear such splendid feedback, and we’re proud to be one of the best safari provider in Dubai

Next time you return, you should try the Ferrari World Theme Park and Grand Mosque Abu Dhabi Tour!”
A
5 - Excellent
Afridi's review for another Saifco Travel and Tourism LLC tour
“An excellent trip from the start till end. A complete package of fun and thrilling activities. Belly dance and fire show was awesome. Will highly recommend this Company.”
H
5 - Excellent
Hayder's review for another Saifco Travel and Tourism LLC tour
“It was an amazing tour and me & my friends really enjoyed a lot. We were picked up on time and it took us more than 30 min to reach. We stopped for couple of minutes and than off to dunes. First we started with half an hour Quad bike ride and than amazing tour started with Dune Bashing. It was a great fun and we thoroughly enjoyed. We took some sunset picture and than move onto Campsite where we were offered to try sheesha, wearing native clothes. The dinner was so lovely and so does the Belly Dance. In short it was an amazing tour to spent with friends. We really enjoyed a lot.
I would definitely recommend this Tour.”
Read more Saifco Travel and Tourism LLC reviews
WHAT'S INCLUDED WHAT'S EXCLUDED
Why Book with Bookmundi
What are customers saying about Bookmundi
Excellent
4.68 Average 345 Reviews

NEED HELP OR HAVE A QUESTION ABOUT THIS TOUR?
If you have any question about this tour or need help with planning a trip, please do not hesitate to get in touch with us. We're ready to help.
Get help
hours 08 From US$ 59
CHECK AVAILABILITY
Response Time: 1 hour Response Rate: 100% MAKE AN ENQUIRY