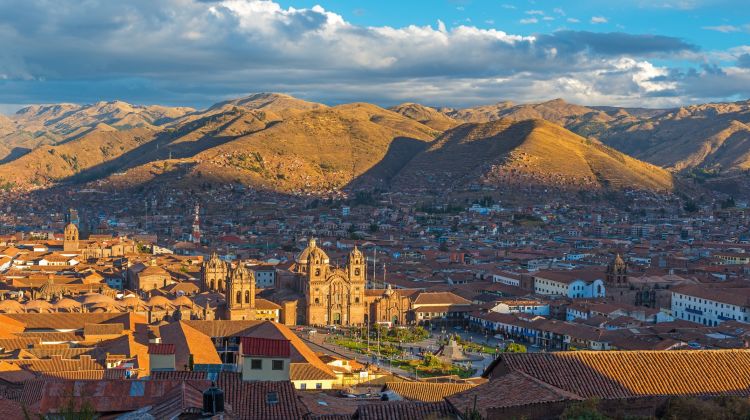 HIGHLIGHTS
Although of a rather short duration, this five-hour, group tour nonetheless covers much of the important sights in and around the city of Cusco. Book with us to discover the highlights of the city that was once the capital of the mighty Inca Empire. Our representative will pick you up from your accommodation in Cusco at 1:00 pm. Hop into the shared transport and head for the famous Cusco Cathedral, built on the foundations of the Incan temple of Kiswarkancha in the sixteenth century.

See its magnificent chapels and altars before walking up to the temple of Qorikancha. Dedicated to Inti, the sun god in the Inca pantheon, this temple was the most important temple in the Inca Empire and was constructed with great care and craftsmanship.

Next, you will drive out of Cusco in a bus to see four incredible archaeological sites. First on the list is Sacsayhuaman, a fortified complex perched atop a steep hill built with rocks that weigh more than 100 tons each. Learn more about the history, culture, meaning and significance of this beautiful place from your tour guide.

Just five minutes away from Sacsayhuaman is Qenqo. See its sacrificial altar before heading out to the archaeological sites of Puka Pukara (a fort) and Tambomachay, the latter consisting of a series of aqueducts and canals that channel water from the nearby natural springs.

This tour comes to an end with a drop-off at the city centre (Cusco's main square) at around 6:00 pm.
View More
CUSTOMER REVIEWS ABOUT KANTU PERU TOURS
5 - Excellent
Based on 10 reviews
Y
5 - Excellent
Yohana's review for another Kantu Peru Tours tour
“The last year i booked this tour with KANTU PERU and all the service was good, from the morning during the pickup, the tour guides, the transportation and the food, was so perfect, i am very happy because this trip was memmorable, it was my honey moon. any complain!”
B
5 - Excellent
BRIE's review for another Kantu Peru Tours tour
“i traveled to Cusco with my family, and we booked many tours with different companies, but the best was Kantu, the tour that we had in Machu picchu was so perfect, our guide Fredy the best, even the food was basic, but so delicious. if you are planning to come to Cusco, you should travel with Kantu.”
C
5 - Excellent
Carla's review for another Kantu Peru Tours tour
“i was wondering to have the best experience in Cusco and fortunately we found them by internet i was the best choise for sure, all the team is very organized with a good level of english, and the guide was super good, interesting and mystic information that made more good our visit to machupicchu. 100% recommendable.”
Read more Kantu Peru Tours reviews
WHAT'S INCLUDED OPTIONAL ADDONS (Available during check-out) WHAT'S EXCLUDED
Why Book with Bookmundi
What are customers saying about Bookmundi
Excellent
4.71 Average 334 Reviews

Other Practical InformationPlease note that entrance tickets to the sights are not included in the tour price. You can either purchase them as addon while booking this tour or on site. In case you want to purchase the tickets on site, we suggest that you carry at least enough money with you for the tickets. WE RECOMMENDED THAT YOU CARRY : Entrance tickets (if you already have them) A current passport or identity document A small backpack with a water bottle, snacks and more Extra cash (soles) to buy souvenirs if you want to Hat/cap and sunglasses Sunscreen Comfortable sneakers Light and warm clothes Waterproof jacket/rain poncho if your trip is between the months of October and March A camera and extra batteries
NEED HELP OR HAVE A QUESTION ABOUT THIS TOUR?
If you have any question about this tour or need help with planning a trip, please do not hesitate to get in touch with us. We're ready to help.
Get help
hours 05 From US$ 18
CHECK AVAILABILITY
Response Time: 1 hour Response Rate: 100% MAKE AN ENQUIRY