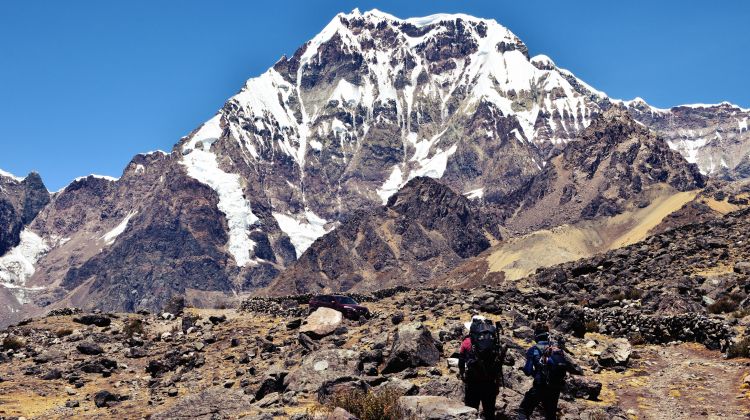 HIGHLIGHTS
The Ausangate Region is a special place. It’s far enough outside Cusco to be considered remote, but it’s also near enough to be accessible for a wonderful adventure.

For three-days, you’ll trek across the breathtaking Cordillera Vilcanota range passing by the Ausangate Nevada on a route called the 'Camino del Apu Ausangate'. The Apu is believed to be the bearer of life in this region and guardian of one of the most pristine mountain ecosystems in the world.

Along the way, you’ll often encounter small poblados (small local communities) with many raising llamas for their way of life. Also, a lot of the houses & shelters in the area don’t have basic utilities, such as electricity, gas, tap water—things we take for granted in more developed countries.

Llamas and horses accompany us throughout the trek and carry our equipment. The animals are owned and looked after by the shepherds and arrieros of the Chillca community. The locals here are proud to share their land with travellers, as well as the spirit of Apu in their beautiful Andean region.
View More
CUSTOMER REVIEWS ABOUT UNU RAYMI EXPEDITIONS
5 - Excellent
Based on 8 reviews
C
5 - Excellent
Connor's review for another Unu Raymi Expeditions tour
“This wasnt just your average planned trip, I was in a bind for a last minute trip, looking online I discovered Unu Raymi Expeditions. James was the best trip planner I could ask for, he was very accommodating to my needs, even helped me out when I got to Cusco & put me up for a couple of nights. He organised & operated my 2 day Lares Valley trek, trip to machu picchu, day tour to salt mines, moray and sacred valley! His team are very professional and handle everyone to their needs and wants in treks and tours around peru! I had met James personally as I was travelling alone, hes a great planner as well now a great friend! I plan on returning soon and meeting up again with James!”
M
5 - Excellent
Max's review for another Unu Raymi Expeditions tour
“James did an awesome job. Due to bad weather conditions, we had to change to a different route and he met all my needs. The Choquequirao Trek was beautiful, my guide No was fit, knowledgeable and always in a good mood. The equipment was brand new and well suited for the trek. I was able to get a special diet during the trek and the food tasted very good. The cook and horseman worked really hard! I thank James for this five star experience in the Andes!”
Unu Raymi Expeditions responded to this review on 22 Oct 2019: “Thanks for your kind words Max, it was a pleasure to have you with us & the crew loved trekking with you. Keep in touch, would be great to see you back in Peru another year!”
A
5 - Excellent
Alex's review for another Unu Raymi Expeditions tour
“I have traveled to many parts of the world, however this was my first trip to Peru. My goal was to visit Machu Picchu and see as many remote Peru sights as time allows. James was excellent. He understood exactly what I was looking for and made it a reality. Peru has all the elements of adventure tourism: Friendly and open culture, unique natural beauty, uncrowded remote areas, ancient archeological sights, night life, also good infrastructure that makes it easy to access the remote areas. Thanks to James I was able to experience the best Peru has to offer. Whether you are looking for a main stream tour, or a unique custom trip James has the rare combination of experience, attention to detail, and passion that will make your adventure the best experience it can be.
Highly recommend!”
Read more Unu Raymi Expeditions reviews
ITINERARY
Alt. in: ALTITUDE MAP
Expand All
WHAT'S INCLUDED OPTIONAL ADDONS (Available during check-out) WHAT'S EXCLUDED
Why Book with Bookmundi
What are customers saying about Bookmundi
Average Reviews

Other Practical InformationThere will be a pretrek briefing, usually held the evening before in your hotel prior to your trek departure. A good level of fitness is recommended, along with some experience at altitude. All dietary and medical requirements should be advised at least 24 hrs before departure. All names, date of births and passport numbers required for the trek (lead traveller to supply photocopy of their passport picture page).
NEED HELP OR HAVE A QUESTION ABOUT THIS TOUR?
If you have any question about this tour or need help with planning a trip, please do not hesitate to get in touch with us. We're ready to help.
Get help
days 03 From US$ 309 See Group Discount
CHECK AVAILABILITY
Response Time: 3 hours Response Rate: 100% MAKE AN ENQUIRY