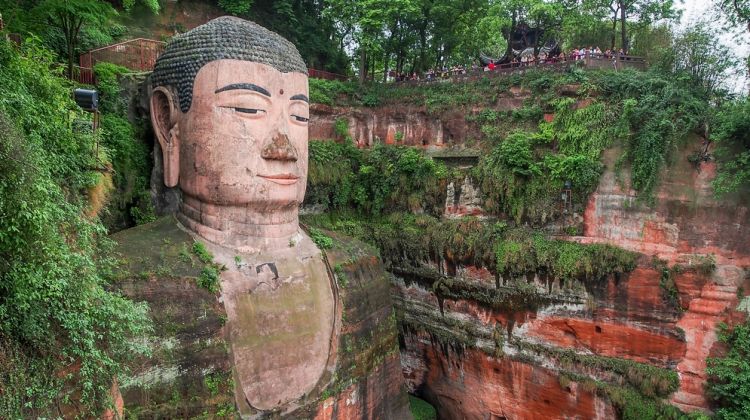 HIGHLIGHTS
Book this 10-hour, guided tour and get the chance to see giant pandas in one of the leading panda-breeding centres in China along with a visit to the Leshan Giant Buddha. Meet your guide at the lobby of your hotel in Chengdu city centre and head for the Chengdu Research Base of Giant Panda Breeding, a non-profit, giant panda research and breeding facility.

The center has two types of accommodation for giant pandas - captive cages and semi-natural enclosures. Most of the giant pandas in the center stay in captive cages, large enclosures that consist of an indoor room and an outdoor courtyard. The semi-nature enclosures are large areas protected by border fences where soon-to-be-released pandas are kept before they are set free in their natural environment.

Drive to Leshan next. Enjoy a traditional Chinese cuisine lunch upon reaching there before walking up to the base of the Leshan Giant Buddha, a 71-metre tall stone statue that was carved out of a red sandstone cliff between 713 AD and 803 AD. The statue depicts Maitreya Buddha.

Also see the numerous smaller carvings of various Buddhas on Grand Buddha Cliff Road as well as temples and shrines scattered around the area before transferring back to your hotel.
View More
CUSTOMER REVIEWS
5 - Excellent
Based on 1 review
Excellent
5 - Excellent
“Excellent”
WHAT'S INCLUDED WHAT'S EXCLUDED
Why Book with Bookmundi
What are customers saying about Bookmundi
Excellent
4.71 Average 329 Reviews

NEED HELP OR HAVE A QUESTION ABOUT THIS TOUR?
If you have any question about this tour or need help with planning a trip, please do not hesitate to get in touch with us. We're ready to help.
Get help
hours 10 From US$ 180 See Group Discount
CHECK AVAILABILITY
Response Time: 2 hours Response Rate: 100% MAKE AN ENQUIRY