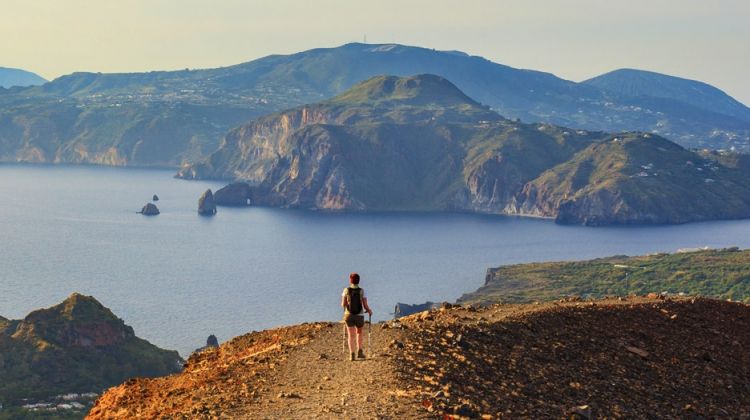 HIGHLIGHTS
Experience "explosive" Sicily and take a journey to discover the Aeolian Islands and Mount Etna.

Who is not fascinated by volcanoes, those monsters of nature that periodically reject the bowels of the earth on the surface? On this trip, you can go at your own pace to hike the slopes of Vulcano, Stromboli and Etna, and feel under your feet the strength and energy of Sicilian volcanoes.

Discover unique European landscapes with volcanic islands, craters, caves, rivers and lakes, which make Sicily unique in the world. The region has a long history of meetings, different peoples, ethnic groups and cultures from which we have inherited our way of life.

Our itinerary begins with the Aeolian Islands, a group of islands where the depth of the earth is constantly in communication with the surface. Enjoy an exceptional hike among these beautiful islands. Then you drive up to the craters of two forces of nature: Vulcano and Stromboli. We will also discover the island of Salina, called the green island, where three small maritime towns are at the foot of two extinct craters, before joining the largest island of the Mediterranean Sea, "Sicily". Next, a stop in Taormina, the famous tourist town in Sicily, where you can admire the medieval village with its small streets and vestiges of the Roman era. Finally, we will reach the slopes of Mount Etna, the largest active volcano in Europe, which dominates Catania and the Ionian coast with its imposing and fascinating mass.

Enjoy your trip to Sicily as a Sicilian, that’s our philosophy!
View More
ITINERARY
Alt. in: ALTITUDE MAP
Expand All
WHAT'S INCLUDED OPTIONAL ADDONS (Available during check-out) WHAT'S EXCLUDED
Why Book with Bookmundi
What are customers saying about Bookmundi
Excellent
4.72 Average 298 Reviews

Other Practical InformationExcursions to the Stromboli and Etna craters are subject to authorization by the authorities and to favorable weather conditions.
NEED HELP OR HAVE A QUESTION ABOUT THIS TOUR?
If you have any question about this tour or need help with planning a trip, please do not hesitate to get in touch with us. We're ready to help.
Ask a question
days 08 From US$ 944 See Group Discount
CHECK AVAILABILITY
Response Time: 3 hours Response Rate: 100% MAKE AN ENQUIRY

Tour is operated by : Altai Italia
Currently 02:02 in Catania MAKE AN ENQUIRY Response Time: 3 hours Response Rate: 100%
AS SEEN IN: