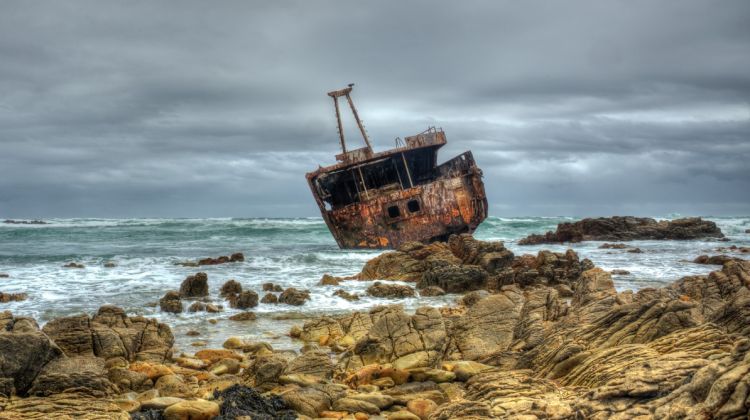 HIGHLIGHTS
Discover Cape Agulhas and many other key attractions on a full day tour departing from Cape Town central and surrounding hotels. You will be accompanied by your own private guide/driver who has a sound knowledge of South Africa will keep you entertained throughout the day.

After pick-up, we will travel along the scenic N2 route, passing through the Elgin Region, known for its endless beautiful apple farms. We will stop for a complimentary cup of coffee at Peregrine Farm Stall after which we will continue along one of our National Roads, passing through the quaint towns of Caledon, Napier and Bredasdorp en route to Arniston. The area is known as the wheat belt of South Africa. In this small firsherman’s village lies the Waenhuiskrans Cave (wagon house cliff) which is the highlight of our tour to the Waenhuiskrans Nature Reserve in Arniston. The Cave’s excitement comes with low tide where we will leap over barnacle encrusted rocks keeping one eye on the ocean for the odd freak wave. It is a big cave located right in the ocean, to the point that some say that a wagon and a full span of oxen could turn inside it.

After exploring Arniston, we will head South to Struisbaai where you will enjoy a variety of activities, from the many fishermen at work with their colorful boats to dining with the locals, while enjoying fresh local fish and chips and a local beer. Lunch will be served at the Sea Shack restaurant or similar.

Struisbaai has its very own different identity in the form of Parrie, a resident stingray which has made this little harbor its permanent residence. Parrie was initially attracted by the morsels thrown by fishing boats and today he is considered the mascot of Struisbaai and many other stingrays has joined Parrie in making Stuisbaai their home. He has definitely become an attraction not to miss.

From here, we will go on to explore the Agulhas lighthouse, after which we will take a walk to the official meeting point of the Two Oceans, namely the Atlantic and Indian Oceans. Photo opportunities are available on the boardwalk. While relaxing, you can touch the water from the two oceans and explore the area. We head back via the town of Elim with a stop at the Black Oystercatcher winery for a complimentary wine tasting.

We continue our tour with a drive through the towns of Standford and Hermanus which has an optional stop for whale watching from the cliffs during the whale season (June to November). We make our way through the beautiful little towns of Betty’s Bay and Pringle Bay with a stop at Stony Point to watch an amazing colony of resident African Penguins.

We travel back to Cape Town via the scenic R44 route filled with so many spectacular fynbos and chains of mountains. Once back in Cape Town, we will drop you off at your hotel bringing our day tour to an end.
View More
CUSTOMER REVIEWS ABOUT KABURA TRAVEL & TOURS
5 - Excellent
Based on 15 reviews
M
5 - Excellent
Mark's review for another Kabura Travel & Tours tour
“The trip overall was great! My wife and I thoroughly enjoyed seeing all the animals, and even the drive through the mountains just getting to the reserve was breathtaking.

The game reserve itself was beautiful. Please do note that it's a private reserve, not a national park like Kruger. We were aware of this beforehand, but many reviews complain about this not being truly "wild" animals. Our travel itinerary didn't allow for the time to fly over to Kruger for a more extensive safari, so Aquila was the next best thing (and relatively close to Cape Town). The animals have generally all been rescued from the wild, and they have substantial area to roam, so the tour still felt more safari-like, not a zoo at all.

Before the game drive, a buffet breakfast was served, and lunch was also provided after the drive as well. The lodge also had rooms for overnight guests, though we only did a day trip.

The game drive lasted for about 3 hours, during which time we saw hippos, rhinos, elephants, springbok, giraffes, lions, hartebeest, and a wildebeest. It really was an incredible experience, and the photos and memories will be with us for a long time!”
J
5 - Excellent
John's review for another Kabura Travel & Tours tour
“Excellent tour, very knowledgable tour guide, visited 3 fantastic vineyards (don't try to do more than 3) with fabulous wines and cheese.”
K
5 - Excellent
Kyle's review for another Kabura Travel & Tours tour
“The tour guide (Joseph) was great, very knowledgeable and patient.Great service with a jam packed itinerary.”
Read more Kabura Travel & Tours reviews
WHAT'S INCLUDED WHAT'S EXCLUDED
Why Book with Bookmundi
What are customers saying about Bookmundi
Excellent
4.69 Average 364 Reviews

NEED HELP OR HAVE A QUESTION ABOUT THIS TOUR?
If you have any question about this tour or need help with planning a trip, please do not hesitate to get in touch with us. We're ready to help.
Get help
hours 10 From US$ 200
CHECK AVAILABILITY
Response Time: 3 hours Response Rate: 100% MAKE AN ENQUIRY