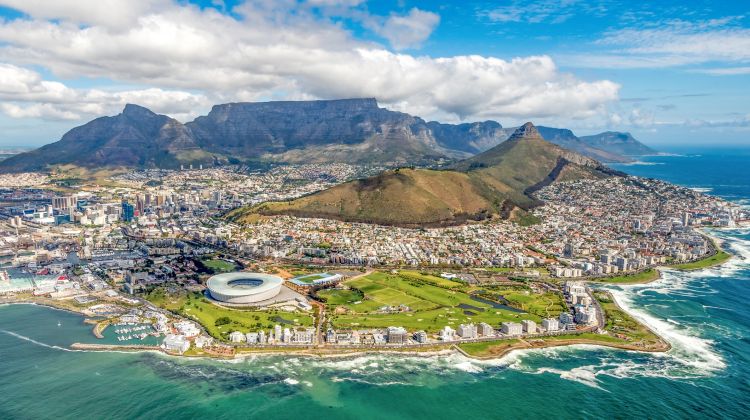 HIGHLIGHTS
After being picked up at your hotel in the central Cape Town area, the drive to the city centre takes us past famous landmarks such as the Castle of Good Hope (visit to Castle of Good Hope is time permitting) built in 1666 by the Dutch East India Company, and City Hall, a baroque building, and the Grand Parade.

As we follow the city's main thoroughfare, Adderley Street, we will see St. George's Cathedral, the Anglican Diocese of Nobel Peace Laureate Archbishop Desmond Tutu. We will pass the Company Gardens and the Malay Quarter (also known as the Bo-Kaap, which means "Above Cape" because of its location up against the slopes of Table Mountain). In the early 18th Century, thousands of slaves from Java, Ceylon and other Far Eastern regions were brought to Cape Town. After slavery was abolished, their descendants, known as the Cape Malays, settled here.

Continue to join a sparkling tour, witnessing the art of diamond cutting and the careful craftsmanship of jewellery manufacturing by skilled experts. Discover the history of the diamond and gold trade in South Africa.

You will be offered the option of continuing to Table Mountain, where you can ascend to the top (weather permitting) by the rotating cable car. Here you will see wildflowers and the famous silver tree, and marvel at a bird's-eye view of the city and its beaches. On a clear day, it is even possible to see Robben Island where Nelson Mandela was imprisoned on one side and Cape Point on the other.

Other Practical InformationTour Departs: Twice daily at 08h00 & 13h00 Tour Ends: ±12h30 or ±17h30 Tour Notes: • NB: It is important that you pre-purchase your Table Mountain cableway ticket to avoid long queues at the ticket office on the day. You can buy your ticket here: http://www.webtickets.co.za/events/featured/table-mountain-cableway/681080 • During the Aerial Cableway’s annual planned maintenance from 7 – 26 July 2020 this tour will visit Signal Hill instead at no extra cost during this period • Minimum 2 guests for afternoon tour • Tour is operated in English. Dual language German/English commentary available on Sun/Tues/Thurs/Sat (morning tour only) • Due to Corona Virus, the Aerial Cableway has ceased operation from 18/03/2020 until further notice. During this time the tour will visit Signal Hill instead at no extra cost drive past the Parliament Buildings, City hall, Slave Lodge & Company Gardens. • Children up to 3 years old are required to be in Car seat. • Car seats are subject to availability at the time of booking. • Parents are allowed to bring along own car seat. • Guests collection times will be re-confirmed the day prior. All guests who are over the age of 18 years must present proof that they have received at least one dose of a FDA or WHO-approved Covid-19 vaccine. Proof of vaccination may include the NYC COVID Safe App, Excelsior Pass, CCD Vaccination Card (or photo), NYC Vaccination Record, or official immunization record from outside NYC or the US. COVID-19 Safety Measures

NEED HELP OR HAVE A QUESTION ABOUT THIS TOUR?
If you have any question about this tour or need help with planning a trip, please do not hesitate to get in touch with us. We're ready to help.
Get help
hours 4.5 From US$ 38
CHECK AVAILABILITY
Response Time: 1 hour Response Rate: 100% MAKE AN ENQUIRY