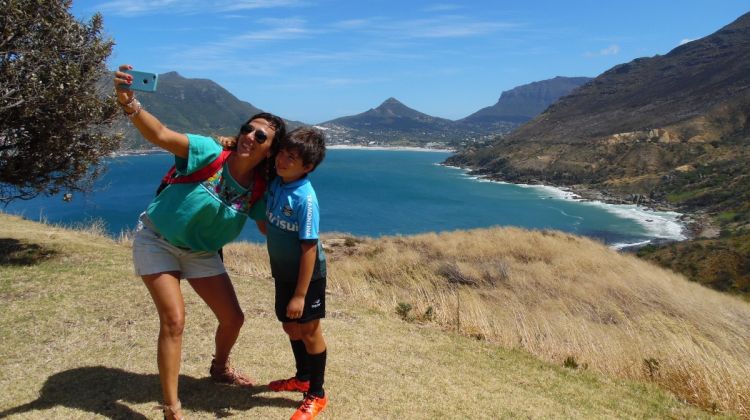 HIGHLIGHTS
Bring your camera! After being picked up from your hotel in central Cape Town, we're headed for Cape Point at the southern tip of the Cape Peninsula, and the most spectacular views in the world! The drive to Cape Point is just as inspiring, passing steep mountains, secluded coves and sweeping beaches, as well as villages and fishing communities.

Our tour begins with a scenic drive along the Atlantic coast, passing through the cosmopolitan suburb of Sea Point and Camps Bay with its glorious views of the Twelve Apostles, part of the Table Mountain range. We'll continue to the fishing village of Hout Bay, one of Cape Town's best-kept secrets. Here is the option to take a short boat trip to Duiker Island (on own account & time permitting) to view the Cape Fur Seals, which inhabit the island.

From Hout Bay we travel to the Cape Point Nature Reserve, comprising over 17 300 acres of indigenous fauna and flora. Here we can see a variety of wildlife that includes baboons, rhebok, Cape mountain zebra, bontebok and the elusive eland. The reserve is also one of the world's largest breeding grounds for tortoises. Bird-watchers, too, will find many fine species to observe.

The majestic coastline offers drama worthy of being called "Nature's Greatest Show". We'll be able to see the union of the Atlantic and Indian Oceans (as per legend), and may even feel the brisk wind that is dubbed the "Cape Doctor" for its presumed curative powers.

Following the coastline along False Bay, we'll return to Cape Town by way of Simon's Town, where we visit the penguin colony at Boulders Beach (entrance fee on own account), Fish Hoek fishing village and Muizenberg. Before our return, we stop at Kirstenbosch National Botanical Gardens for a short walking tour of the beautiful gardens.

We return to Cape Town, passing the University of Cape Town, Rhodes Memorial and the Groote Schuur Hospital. You will be returned to your hotel in central Cape Town.
View More
CUSTOMER REVIEWS
5 - Excellent
Based on 1 review
Fantastic
5 - Excellent
“One of the best tours ever!”
WHAT'S INCLUDED WHAT'S EXCLUDED
Why Book with Bookmundi
What are customers saying about Bookmundi
Excellent
4.71 Average 332 Reviews

Other Practical InformationTour Departs: 2021 season: Daily (except 07 March 2021 and 03 April 2021) at ±08h00 2022 Season: Daily (except 06 March 2022 and 16 April 2022) Tour Ends: ±17h00 Tour Notes: *** As from 01 November 2021 the tour will stop at Rhodes Memorial Restaurant for cake and tea instead of Kirstenbosch Gardens.*** Dual language German/English commentary on Sun/Mon/Tues/Wed/Thurs/Fri • Children up to 3 years old are required to be in a car seat. • Car seats are subject to availability at the time of booking. • Parents are welcome to bring along own car seat. • Guests collection times will be re-confirmed the day prior.
NEED HELP OR HAVE A QUESTION ABOUT THIS TOUR?
If you have any question about this tour or need help with planning a trip, please do not hesitate to get in touch with us. We're ready to help.
Get help
hours 8.5 From US$ 98
CHECK AVAILABILITY
Response Time: 2 hours Response Rate: 100% MAKE AN ENQUIRY