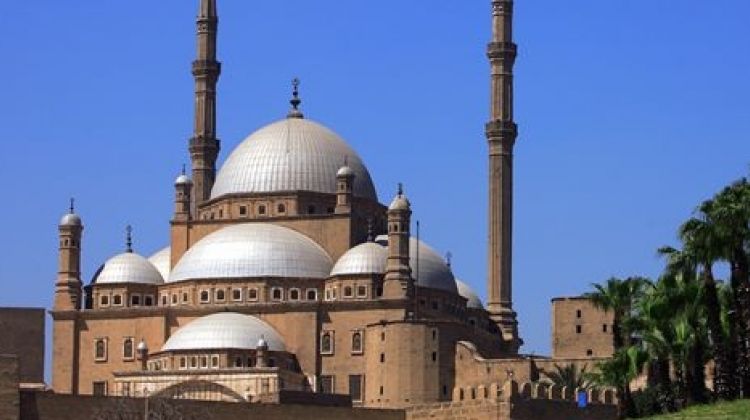 HIGHLIGHTS
This half day tour to Islamic Cairo starts At 10:00 am when our guide will pick you up from your hotel and transfer you to the Citadel of Salah El Din in Cairo.

Over there in Islamic Cairo you will be able to visit and enter some of the mosques such as - `Masjid` Amr Ibn Elas Mosque, followed by a visit to the Most and biggest mosques in Cairo which is El Sultan Hassan Mosque.

We will then visit another big famous Mosque which is the Al-Rifa’i Mosque. The building is located opposite the Mosque-Madrassa of Sultan Hassan, which dates from around 1361, and was architecturally conceived as a complement to the older structure. The mosque was constructed next to two large public squares and off of several European style.

Then Followed by a visit to one of the biggest mosques in Cairo which is El Sultan Hassan Mosque that also known as `Madrasa El Sultan Hassan` that was founded by Sultan Hassan in 1356 A.D. Commissioned by a sultan of a short and relatively unimpressive profile, al-Maqrizi noted that within the mosque were several “wonders of construction”. The mosque was, for example, designed to include schools for all four of the Sunni schools of thought: Shafi’i, Maliki, Hanafi and Hanbali

Then drive to Al-Azhar Mosque in Cairo is also known as the mosque of the most resplendent is a mosque in Islamic Cairo in Egypt. It was the first mosque established in Cairo, a city that has since gained the nickname "the City of a Thousand Minarets".

End your day tour with a visit to El Hussein Mosque in Cairo. Hallowed mosque is believed to be the burial site of the head of the prophet Muhammad's grandson.

NEED HELP OR HAVE A QUESTION ABOUT THIS TOUR?
If you have any question about this tour or need help with planning a trip, please do not hesitate to get in touch with us. We're ready to help.
Get help
hours 04 From US$ 65
CHECK AVAILABILITY
Response Time: 3 hours Response Rate: 100% MAKE AN ENQUIRY