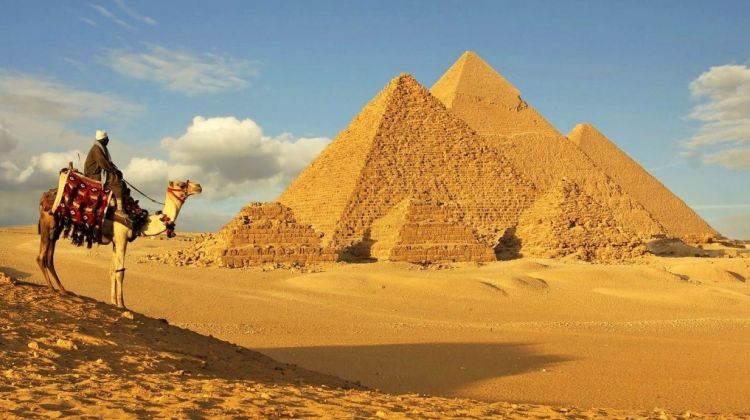 HIGHLIGHTS
This full-day guided tour of the Pyramids of Giza, Sakkara and Memphis is for those who want to see the major highlights around Cairo in a short time. You will be picked up from your hotel in Cairo by your tour guide and driven to Giza to see the famous pyramids of Cheops, Chephren and Mykerinus.

Proceed to see the enigmatic Sphinx next before heading for the Pyramid of Djoser, the world's oldest major stone structure, in Sakkara. This pyramid was built during the reign of the Third Dynasty of Ancient Egypt 4,800 years ago.

Also visit the Tombs of the Nobles in Sakkara and learn more about the daily life of ancient Egyptian noblemen. Enjoy your lunch at a local restaurant and transfer to the city of Memphis which was founded by King Mina and was the capital of Egypt during the Old Kingdom.

Memphis remained the centre of politics and culture in Egypt for over 3,000 years. See the famous statue of Ramses II and the Sphinx of Queen Hatshepsut in Memphis. We will drive you to the hotel after that.
View More
CUSTOMER REVIEWS ABOUT LOOK AT EGYPT TOURS
5 - Excellent
Based on 59 reviews
A
4 - Very Good
Review for another Look at Egypt Tours tour
“We couldnt have faulted Mostafa. He had an amazing knowledge of Egypt and the history of this wonderful country. The tour ticked all the boxes for us. We felt safe at all times, and enjoyed all aspects of the trip. Would definitely recommend Egypt and LOOK AT EGYPT tours to anyone looking for an amazing adventure.”
j
5 - Excellent
Jenny's review for another Look at Egypt Tours tour
“This was an experience of a lifetime. You should know this an adventure, not a vacation, so if you want to just relax about, this is not for you. However, if you want to see the major sights of Egypt, this is it! It is active adventure with scheduled and optional tours that enhance your Egyptian experience and should not be missed. I loved every minute of this immersion into Egypt. Over all the service provided by Look at Egypt tours was beyond my expectation, made me very comfortable with the arrival and departure from Egypt, escorted and guided all the way through with first class accommodations, transfers and guided tours, the whole trip was well organized, safe and enjoyable. We highly recommend this tour and Look at Egypt.”
A
5 - Excellent
Ashley's review for another Look at Egypt Tours tour
“We were excited to be visiting Egypt for the first time and our tour was planned to be on April 2020. We found Look at Egypt Tours on the internet, and they seemed good value. On emailing, we had prompt replies from their representative Kareem. He answered all our questions and confirmed a booking for the tour of Cairo and Nile cruise. We paid a deposit of 50% of the tour cost of our trip.
But sadly, due to Corona outbreak it would not be possible for us to travel to Egypt. All landings in Egypt were cancelled. We contacted Look at Egypt Tours as soon as possible, but by the time it was possible to do this it was only a short time before the tour was due to depart. We therefore feared that we would be liable for the full cost of the tour and were expecting to have to claim on our insurance.
On our return, we emailed Mr.Kareem again to check the position and request a cancellation invoice which we knew would be required to claim on our insurance. We were pleasantly surprised to hear from him by return email that he had spoken to his manager Ahmed, and that it had been agreed to return the deposit to us because the cancellation had been no fault of ours. A few days later, a full refund of the deposit we had paid was credited back to our credit card account.
We were very impressed with this level of customer service. If eventually we do manage to get to Egypt in future, we will definitely be contacting Look at Egypt Tours again.”
Read more Look at Egypt Tours reviews
WHAT'S INCLUDED WHAT'S EXCLUDED
Why Book with Bookmundi
What are customers saying about Bookmundi
Excellent
4.71 Average 334 Reviews

NEED HELP OR HAVE A QUESTION ABOUT THIS TOUR?
If you have any question about this tour or need help with planning a trip, please do not hesitate to get in touch with us. We're ready to help.
Get help
hours 07 From US$ 117 See Group Discount
CHECK AVAILABILITY
Response Time: 3 hours Response Rate: 100% MAKE AN ENQUIRY