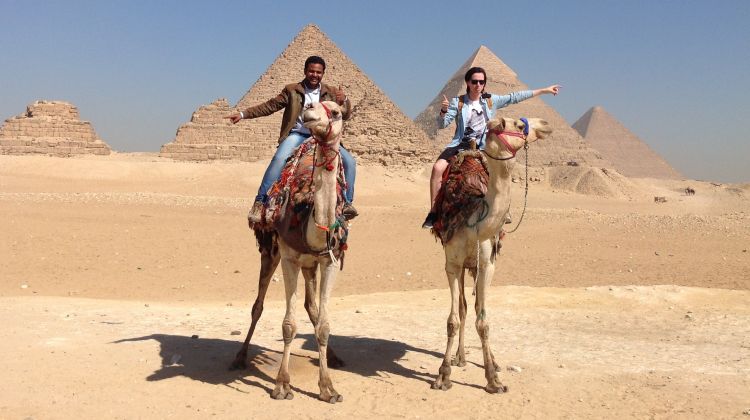 HIGHLIGHTS
This is a full day tour to some of the most ancient landmarks of Egypt: The Giza Pyramids, The Valley Temple, Memphis City.

8:00 am - Pickup from your hotel in either Cairo or Giza to start your day tour of the Great Pyramids Of Giza - Cheops, Chephren & Mykerinos. After these pyramids, we visit the Valley Temple - The place where the priests mummified the dead body of king Chephren, owner of the second pyramid at Giza Plateau.

It is also the place where you can have a close-up look at the Sphinx - the legendary guardian that stands by the huge funeral complex with its lion body and the head of king Chephren.

Lunch is included in between visits at local restaurant for each person but beverages are not included.

Then we continue our day tour to Sakkara, located only 27 km southwest of Cairo. We will visit the Step Pyramid (Built for King Zoser) which is considered an important part in the process of the pyramid evolution, which were made from the simple mastaba to its widely known form.

Then continue your day tour to Memphis, the ancient capital of Egypt, where the colossal statue of Ramses II and the great Alabaster Sphinx are located. Memphis dates back to 3100 BC.

At the end of the tour you will be transferred back to your Hotel.
View More
CUSTOMER REVIEWS ABOUT EMO TOURS
4 - Very Good
Based on 11 reviews
m
5 - Excellent
Mary's review for another EMO Tours tour
“Excellent”
L
5 - Excellent
Lauren's review for another EMO Tours tour
“Ibrahim was our tour guide and he was amazing, very nice and respectful, his English was perfect he went above and be on and we did everything we wanted to do and then some he really made our experience special he made us feel very comfortable, he was very knowledgeable about everything, from the pyramids and all the ancient ruins in the museums, even took us shopping and as we all know people can haggle you when at the pyramids and shopping around town, and he kept them all away which we extremely appreciated, and helped us translate when making purchases to ensure we got the best deal, he even took us out for refreshers and lunch at the end of the day !!! And extremely considerate he took a lot of very good pictures he was like a personal photographer, he did everything at our pace. We originally had booked him as our shuttle from the Cairo airport to our hotel when we first arrived in Egypt, he was on time to pick us up from the airport, He was waiting with our name and actually found us as soon as we walked out the door of the airport! he was also extremely punctual when picking us up from the hotel to start our tour and very accommodating considering we booked our tour on our ride from the airport to our hotel. Anytime in Cairo or the surrounding area I would definitely book him for any thing needed whether it be a tour or just an airport shuttle .”
H
5 - Excellent
Hseyin's review for another EMO Tours tour
“I arrived the Luxor in the early of morning around 06:05 And We met Ms Salwa,my Tour Guide around 07:00.The tour starts with the temple of Hetseptshut, which was covered by sands for years.Temple has great place where the sun set.Then we move through the valley of kings,on the road we stopped near by the master pottery house whose grand grandfather was worked for Carter.After we bought some lovely stuff, we head through the tombs by taking great information from our lovely intelligence guide,Ms Salwa.We finished our journey after visiting Temple of Luxor and the Temple of Karnak which were most excited and spectacular monumantel areas.I kindly invite you to come to Egypt and see those amazing history and ofc you can feel amazing with the right hands,bookmundi
Regards”
Read more EMO Tours reviews
WHAT'S INCLUDED OPTIONAL ADDONS (Available during check-out) WHAT'S EXCLUDED
Why Book with Bookmundi
What are customers saying about Bookmundi
Excellent
4.71 Average 333 Reviews

NEED HELP OR HAVE A QUESTION ABOUT THIS TOUR?
If you have any question about this tour or need help with planning a trip, please do not hesitate to get in touch with us. We're ready to help.
Get help
hours 08 From US$ 120
CHECK AVAILABILITY
Response Time: 3 hours Response Rate: 100% MAKE AN ENQUIRY