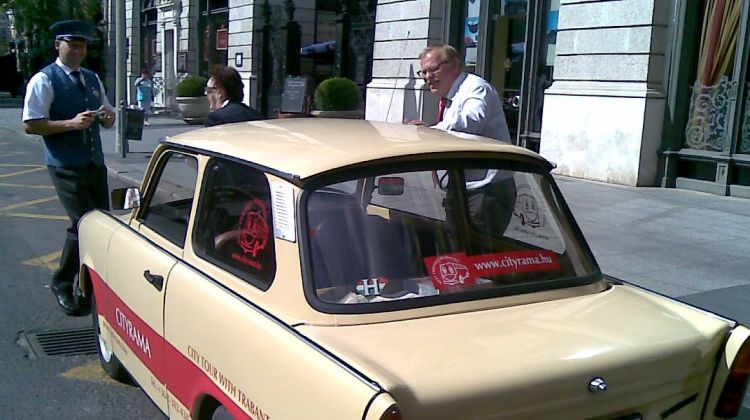 HIGHLIGHTS
Explore Budapest in a Trabant! The authentic Trabant CITY TOUR with our professional driverguide. Anytime and anywhere you want.

There is no better way to see Budapest than with an original Trabant 601.


With this unique sightseeing in Budapest you can combine unsurpassed driving feeling and a nostalgic sightseeing with the real atmosphere of the past communist Era.

We suggest to visit the Communist Statue park, the Ecseri flea market, typical prefabricated blocks of flats built in the 70s, 80s or to do a regular city tour in Budapest.

You can also book your airport transfer with a Trabant!

In order to try the Trabant you must have a valid driving licence.
We organize this tour according to your needs and ideas.

Other Practical InformationIn order to try the Trabant you must have a valid driving licence.
NEED HELP OR HAVE A QUESTION ABOUT THIS TOUR?
If you have any question about this tour or need help with planning a trip, please do not hesitate to get in touch with us. We're ready to help.
Ask a question
hours 03 From US$ 176 Flat Rate
Sorry, this product is currently not available.
Response Time: 2 hours Response Rate: 100% MAKE AN ENQUIRY

Tour is operated by : Cityrama Budapest Active 1 day ago
Currently 01:35 in Budapest MAKE AN ENQUIRY Response Time: 2 hours Response Rate: 100%
AS SEEN IN: