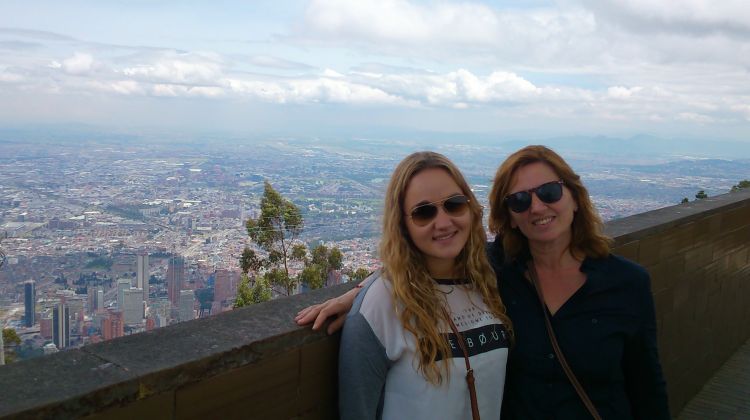 Previous Next
See Itinerary
HIGHLIGHTS
This 4-hour walking tour will take you to the most important locations in "La Candelaria" by making a loop around the historical center and visiting Monserrate. You will learn about the indigenous pre-Colombians, the founding of the city by the Spanish, the conflicting views about the history of the city, the failure of the social revolution and the modern developments.

Some of the important landmarks you will see in the tour are: the Square of Bolivar, Square of Santander, Rosario Square, Chorro de Quevedo, Gabriel García Márquez Cultural Center and the Church of la Candelaria amongst other things.

During the tour you will also make a stop in one of the historical houses where you will have a taste of an antique and traditional alcoholic drink called chicha. By the end, you will go up to the summit of the most important mountain in Bogotá, Monserrate, where you will visit a religious site, a handicrafts market and observe a panoramic of the city from one of the viewpoints.

At the end of the tour, you will return to the original departure point.
View More
CUSTOMER REVIEWS
4 - Very Good
Based on 1 review
We had a very good tour with Bogota Pass
4 - Very Good
“Great way to experience Bogota. I would highly recommend this tour to anybody looking to get an insider's perspective on Bogota, and Colombia, thanks.”
WHAT'S INCLUDED WHAT'S EXCLUDED
Why Book with Bookmundi
What are customers saying about Bookmundi
Excellent
4.71 Average 329 Reviews

All sales are final and incur 100% cancellation penalties

Other Practical InformationConfirmation will be received at time of booking Children must be accompanied by an adult Adult pricing applies to all travelers Minimum drinking age is 18 years A minimum of 2 people per booking is required A maximum of 8 people per booking A moderate amount of walking is involved Due to uneven surfaces, this tour is not recommended for those with walking disabilities or using a wheelchair Passport name, number, expiry and country is required at time of booking for all participants Operates in all weather conditions, please dress appropriately Please be ready at the specified time for the pick-up
NEED HELP OR HAVE A QUESTION ABOUT THIS TOUR?
If you have any question about this tour or need help with planning a trip, please do not hesitate to get in touch with us. We're ready to help.
Get help
hours 04 From US$ 77 See Group Discount
Sorry, this product is currently not available.
Response Time: 3 hours Response Rate: 100% MAKE AN ENQUIRY