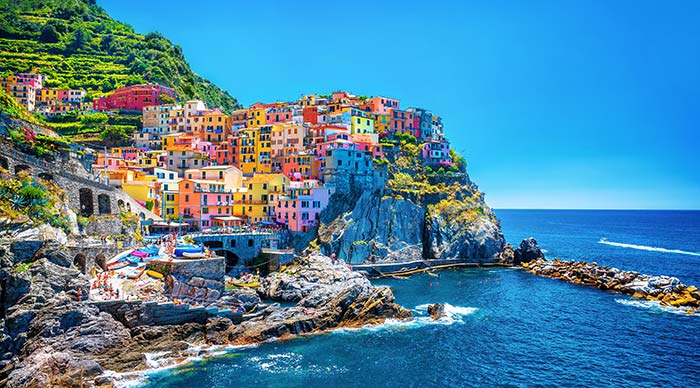 The all-white style trend might be ruling the runways, but neutrals surely seem to be on their way out in the travel world. Fall certainly has its way of adding color to your life. Despite being a season where birds, animals, and even trees, spend most of their time preparing for the gloomy winter days, fall still ends up being incredibly beautiful, presenting a spectrum of colors that lift your spirits.

Winter may be coming, but that never stopped anybody from having a blast today. So if you’re planning to take that one last trip before it becomes too cold to travel to many parts of the world, here’s a list of the world’s most colorful destinations, rainbow locations that can really blow you away.

Cinque Terre captures your eyes with a beautiful collection of 5 villages that resemble the colors of the rainbow when seen from the water. The multicolored houses of Corniglia, Monterosso al Mare, Riomaggiore, Manarola and Vernazza bask under the setting sun like glittery gems, offering one of the most stunning photo ops you’ll ever see. Dating back to the Middle Ages, each of these villages also offers grand insights into ancient architecture through beautiful parish churches and castles.

Amsterdam’s tulip festival may be reason enough to attract thousands of visitors to the city, but what makes a trip to the Netherlands even more special are its tulip fields. The star of the show is Keukenhof, a stunning park that sees the planting of 7 million tulip bulbs each year.

Japan is most famous for its cherry blossoms, but there’s another plant that often steals the show as well. Shibazakura, or pink moss, is best seen in Hitsujiyama Park where it turns into a carpet of purple and pink colored blooms against the stunning backdrop of Mt. Buko. Tens of thousands of flowers come together to make the place come alive, attracting visitors and shutterbugs from all over the world.

Maharaja Sawai Ram Sing had the entire city dressed in pink to celebrate the arrival of the Prince of Wales in the year 1853, and the Pink City never let go of its colorful decors ever since. The capital of Rajasthan basks under the regal splendor of its ancient forts and palaces, but it looks even more beautiful thanks to its signature rose-tinted hues that shimmer under the setting sun, making its archaeological wonders feel even more special. We’d recommend a stay at the Sujan Rajmahal Palace, a beautiful palace cum hotel that feels like one of your whimsical fantasies with its quirky architecture and pink dining room.

No list of the world’s most colorful destinations can ever be complete without mentioning the Great Barrier Reef, the most beautiful and visually stunning reef system on the planet. The reef presents more than 1500 species of fish and can even be seen from space. The best way to explore this exotic work of nature is by snorkeling and scuba diving to its depths, to come across all shapes, sizes and colors that you can possibly imagine. And you’d better start planning that Australian journey soon for the Great Barrier Reef is also known to be one of the fastest disappearing reef systems in the world.

Let’s face it. It doesn’t get more colorful than those frothy facades, quirky decors, art-deco buildings and neon lights of SoBe. The azure waters flank one side of Ocean Drive while people wearing all sorts of colorful dresses, tropical greens, flamingo pinks and jet blacks dominate the other. Add to that all those glistening bodies and sexy people, those world-famous nightclubs and A-listers, and you really have all the ingredients you need for one of the craziest party nights of your life.

Popularly called the River of Five Colors, Cano Cristales River is a natural wonder that turns into striking shades of green, blue, yellow, red and black each fall due to the unique combination of a rare plant that flourishes in the region, the blue waters, green algae and black rocks. The river also presents a number of caverns, waterfalls and pools, making it seem even more stunning and dramatic. Better yet, the Cano Cristales doesn’t have any living creatures, so you can bathe uninterrupted and without having to bother about creepy crawlies!

Pink Sands Beach easily ranks among the most beautiful beaches on the planet. It has the prettiest stretch of pink sand thanks to pink and red marine creatures that live in the coral reef off its coast. The sands stretch for 3 miles and are often 50 to 100 feet wide. The waters are also perfect for snorkeling and swimming ass the reef helps to keep things calm and warm throughout the year.

Located close to the German border, this beautiful town is famous for its hidden wonders, cobblestone streets, Alsatian architecture, old-world bridges, quaint canals and serene atmosphere. Colmar often reminds you of those fairy tale kingdoms with its half-timbered houses that showcase the colors of the rainbow all dressed up in fresh flowers and potted plants. Colmar has also managed to remain unchanged over the years, and this means that every step into Colmar feels like a step back into time.

Balat takes you back to a long-lost era, to a time when it was once famous as the Jewish quarter of the city. From Byzantine Greeks to Jews to Armenians, Balat attracted all kinds of residents over the years, and this reflected in its architecture. You can spend hours exploring those beautiful pink and yellow colored two to three story houses with cantilever balconies sparkling under the morning sun.

A bubblegum colored lake, a purple countryside, vibrant neighborhoods, artsy decors, the world is full of so much color. Natural wonders and man-made creations come together in this list of the world’s most colorful destinations, just waiting to be explored and experienced. So wake up the shutterbug in you and start traveling!

Looking for your next travel escape? Check out Bookmundi’s The Ultimate Travel Bucket List: 10 Things to Do Before You Die that presents some of the most phenomenal and inspirational travel destinations on the planet.

One thought on “World’s Most Colorful Destinations”