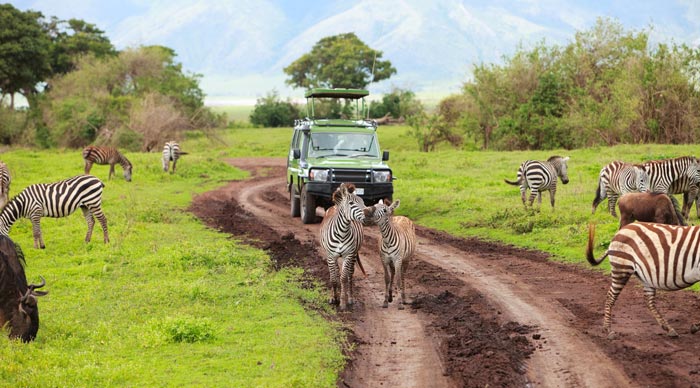 You don’t have to travel all the way to Africa for a safari adventure anymore. There was a time when the best safaris could only be found in the African continent…

and even then, you were expected to be dressed in debonair safari suits and sun helmets. Today, you can find exciting safaris all around the world and can enjoy a safari weekend with nothing else but a rucksack. The African continent is still the most famous place for a safari, but other destinations are also cropping up. Bookmundi presents a list of the top best safari destinations around the world.

If you don’t have too much of time for a Safari and would still want to see as many animals as possible, it makes sense to head over to the Ngorongoro Crater. The crater is formed out of the caldera of a humongous volcano that became extinct centuries ago. It hosts an entirely unique ecosystem that consists of thousands of animals such as crocodiles, black rhinos, elephants and hippos who never bother to leave the crater. It is also home to one of the densest population of lions in Africa.

Serengeti, the ultimate safari destination, attracts travelers from all around the world due to its Great Migration phenomenon that sees millions of animals moving across the open plains as they search for food and water. The migration consists of gazelles, zebras and wildebeests traveling together with lions, cheetahs and leopards close behind searching for prey. Other animal sightings include cape buffalos, hyenas, elephants and jackals. The ideal time to visit the Serengeti is between the months of December to March.

The following safaris are highly recommended:

The diverse range of habitats and ancient rainforests always make South America one of the best places to see a variety of wildlife from up close. The Pantanal region in Brazil is the largest wetland area in the world, and this means that it always acts as an ideal starting point for your safari. Home to countless birds, reptiles and some of the largest mammals, Pantanal always offers the best animal sightings, including glimpses of the elusive jaguar as well as the macaws, giant otters, anteaters and pumas. You can also choose from a wide range of safari options that range from horseback expeditions and jeep safaris to treks. The ideal time to visit the Pantanal region is between the months of June to October.

Maasai Mara is another popular wildlife safari destination. It hosts the Great Migration as well and the beasts start arriving between the months of July, staying until November. In between these months, Maasai Mara is full of millions of animals, making it an ideal place to watch Migration activities. The Mara is also home to a large population of big cats, making it the best destination to spot cheetahs, leopards and spot lions.

South Africa is one of those few countries that really has something for all kinds of travelers. From modern cities to exotic natural beauty, from breathtaking beaches to exhilarating mountains, there is no shortage of things to see and do here. One of the most memorable experiences of South Africa can be found in its legendary Kruger National park, probably the best place to see the Big Five – rhinos, lions, elephants, leopards and buffalos. It is also home to some of the most beautiful and luxurious safari lodges on the planet.

Sri Lanka presents wildlife enthusiasts with its own version of the Big Five – Sloth bears, sperm whales, Asian elephants, blue whales and leopards. The Yala National Park is home to the largest density of leopards on the planet and its vast open terrain makes it an ideal place for leopard watching. The park is also home to all kinds of birds, and the incredibly rare sloth bears, which can only be found in the Indian subcontinent. Head to the South Coast for whale watching adventures between the months of January to April. Finally, those interested in checking out the humongous Asian elephants can visit the Minneriya National Park. The park hosts The Gathering where 300 elephants gather by the lake bed between the months of August and September.

This UNESCO World Heritage Site offers an entirely different kind of experience. This thickly-wooded expanse is home to 50% of the mountain gorillas in the world, a species that has already been listed as critically endangered. Visitors travel on foot to watch these primates in the wild and interact with them. It is very common for visitors to approach the gorillas, touch them and groom them under expert supervision. The park itself have been gifted with enchanting landscapes, jagged valleys and beautiful waterfalls, making it the ultimate safari destination in the region.

The Kaziranga National Park is home to more than 1600 one-horned rhinos, which means that the park hosts close to two-thirds of the total number of one-horned rhinos in the world. You can embark on rhino-spotting adventures sitting on the back of elephants which allows you to get within 2 meters of the rhino. Elephant rides start in the month of November and lasts till the month of February. If you happen to visit the park in the drier months, jeep safaris are your only option. Other animals found in the park include swamp deer, elephants and several species of birds.

Gorongosa is the flagship reserve of Mozambique. There was a time when it was more famous than South Africa and Zimbabwe, but the effects of war caused a major depletion in the area’s resources. Today, the population of lions, elephants and hippos is growing back to its former glory and the national park is once again beginning to enjoy the status of being one of the most prominent safari destinations in the world.

Whether you’re deep in the African bush or are following one-horned rhinos on elephant-back, a trip into the wilderness always presents a life-changing experience. The world is full of safari parks and reserves, and it ultimately boils down to choosing one that suits your preferences, your itinerary and your budgets.