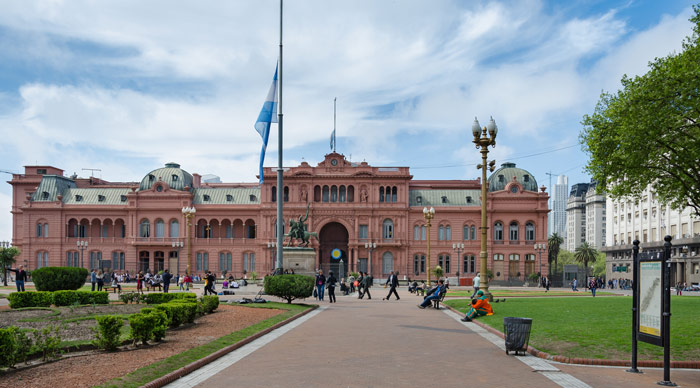 Buenos Aires, affectionately known as BA, is a city that always manages to get under your skin. Alive, energetic, sexy, romantic and beautiful, Buenos Aires is exactly like Europe, but with a Latin flair.

It is a delightful city that is full of opinionated, passionate and incredibly friendly locals. It is full of old-world architecture and cobblestone streets, but also presents a unique street life and all the crazy scenes that come along with it. It is sophisticated yet completely down to earth, cultured yet very exotic, strong yet loosely eclectic. It never makes you feel bored and always manages to eat into your sleeping time. Your skin won’t thank you for a trip to Buenos Aires, but your mind and spirit most certainly will. To help you along your way, Bookmundi examines the top things to do in Buenos Aires.

Occupying the entire eastern side of the Plaza de Mayo, Casa Rosada can be distinguished by its unmistakable pink façade. This presidential palace is located on a site that once used to host riverbank fortifications. The side that faces Plaza de Mayo has great historic importance as its balconies were used by Raul Alfonsin, General Leopoldo Galtieri and Juan and Eva Peron to preach and address thousands of passionate Argentines. The palace is best seen just before sunset when its pink color gains a beautiful glow. You can also access the 18th century ruins of Fuerte Viejo via the Museo del Bicentenario.

Dance the Night Away

Visiting a milonga, a tango club, is a must while visiting Buenos Aires. Salon Canning is one of the most traditional milongas in the city. It takes you back in time and presents an old-world scene and offers one of the best places to understand the culture of Buenos Aires. Tango is enjoying a resurgence and you can always find a young and attractive crowd in most milongas in the city. Other popular tango clubs include Tango Cool and La Viruta.

Fair of the Mataderos

Head over to the Fair de Mataderos to get your culture fix while in Buenos Aires. This is where you see those guachos (Argentinian cowboys) ride beautiful horses and rival each other in local contests and local vendors sell a variety of arts, crafts and foods. Tango dancers complete with traditional costumes line the streets and the delicious aroma of steak sandwiches fills the air. And if you long to get into the thick of things, simply sign up for a boleadora (guacho class). You’re sure to fall in love with the atmosphere, the energy and the groovy sights.

La Recoleta is another must-see while in Buenos Aires. Its ornate monuments can easily become the highlight of your journey. This city of the dead is one of the top things to do in Buenos Aires and it lets you wander for hours through its streets, statues and marble sarcophagi. Bookmundi recommends you to seek out the tomb of Evita. Her mausoleum is a bit difficult to find, but you can always ask one of the tour guides for directions.

Palermo is a sprawling neighborhood that is divided into three – Palermo Viego, Palermo Chico and Alto Palermo. Palermo Viego is where you get to see the local flair and Palermo Chico hosts some of the best and most beautiful mansions in the city. Alto Palermo is known for its urban parks and museums such as the MALBA and Carlos Thays Botanical Garden. Visit Palermo Soho and Palermo Hollywood for lively nightlife, outdoor markets, high-end stores, exciting boutiques, bustling cafes and beautiful cobblestoned streets. Palermo is safe, fun and easy to get to. It is chic and trendy and always boasts of offering good food and great sights.

Buenos Aires is famous for its parrilas. Parrilas translate to grills that have a huge grate of roasting meat as their centerpiece. La Estancia is one of the most popular parillas in the city. It is famous for those enormous silver trays of sizzling meat on their own private beds of coal. Another popular parilla in the city is El Litoral. It may not be as fancy as La Estancia, but its meat is equally delicious.

Despite being a tough working class neighborhood that gets a bad rap because of its petty crime, La Boca attracts countless visitors year after year because of its authentic experiences and rich history. Considered to be a melting pot of all things Argentinean, this is where you can find the best souvenirs and most delicious cuisines. Enjoy mouth-watering dishes sold by street vendors and watch live tango performances while you eat. The neighborhood also has a number of restaurants. Bookmundi recommends you to stay away from La Boca after dark.

Museo Nacional de Bellas Artes is the most important art gallery in the country. It hosts many important works by Argentine artists from the 19th and 20th centuries such as Benito Quinquela Martín, Edwardo Sívori and Xul Solar. The museum also hosts an impressive collection of artwork made by European artists such as Picasso, Cezanne, Van Gogh, Degas and Rembrandt.

Teatro Colon is an impressive seven-storey building that is a must see while in Buenos Aires. Considered to be one of the most prominent landmarks in the city, Teatro Colon acts as the main performing-arts venue and the only venue of its kind in Argentina. It is one of the best places in South America for ballet and opera and boasts of outstanding acoustics. Teatro Colon can seat as many as 2500 guests and backstage tours are also available.

Surrounded by the beautiful Casa Rosada and other government buildings, Plaza de Mayo became famous as the place where thousands gathered together to listen to Eva Peron’s speech in the year 1952. Plaza de Mayo is a beautiful place where you can sit and watch life go by. Visiting the plaza on Thursdays can be an emotional experience as the Madres de Plaza de Mayo march is held here every Thursday afternoon to commemorate the disappearance of the city’s sons and daughters during the Dirty War.

If you’re traveling to Buenos Aires as a couple, a trip to one of those love hotels is a must. Shady as they sound, these places can offer a refreshing sense of adventure in your love life and can even be booked by the hour. These hotels can be identified by their neon lights and present a range of options from water beds and mirrored ceilings to all kinds of theme rooms. Bookmundi recommends the Rampa Car Love Hotel.

San Telmo’s main thoroughfare is closed to traffic on Sunday mornings as the area transforms into a major shopping paradise. Browse craft stalls and sip on freshly squeezed OJ, check out beautiful glass ornaments in one of the stalls in Plaza Dorrego and enjoy street performances.

Stay tuned for more insights into the best tours and hottest things to do in Buenos Aires and Argentina. Bookmundi helps you make your Argentine adventures incredibly special and you can always trust us to come up with the most unique and exciting tours for your journeys.