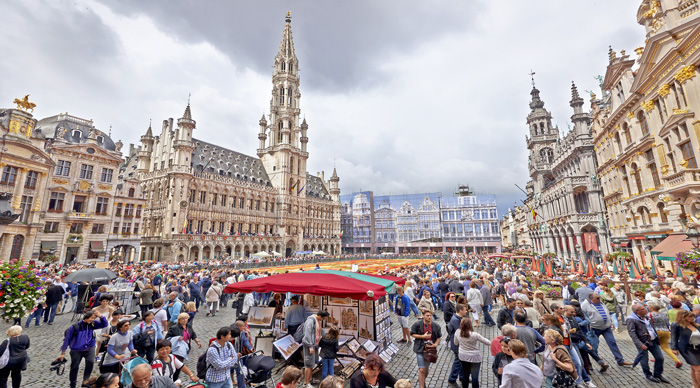 Brussels is a city that never fails to surprise, motivate and captivate you in the same breath. It is historic yet chic, showy yet polite, and it really doesn’t have to go out of its way to impress travelers.

Most people love the quality of life and the enviable bar and café scene, and almost all visitors fall in love with its historic architecture and old world squares. Exploring its narrow streets on foot is bound to provide an experience of a lifetime and you’re always bound to feel right at home. Here are some of the top things to do in Brussels (sights, attractions and experiences) that you simply must visit while in Brussels.

The Grand Place, a UNESCO World Heritage Site, is truly grand. This historic square was built in the 13th century as a merchant market and transformed into the city center over the years. The square is dominated by the gothic beauty of the town hall, and the surrounding winding streets are the perfect place to lose yourself in. It is also the best spot in the city to see Belgian hospitality at its very best and is full of countless bars and terrace cafes.

Insider Tip – If you’re visiting Brussels during the warmer months, Grand Place becomes even more special because of the daily flower market and enjoy open-air concerts and events that are held throughout the summers.

A walking tour of Brussels can prove to be an obvious highlight of your trip. Walking is considered to be the best way to explore the historic city center of Brussels. A walking tour will Introduce yourself to its rich history, listen to local folklore and enjoy the city the way locals do. Some of the obvious highlights that must be covered while in the historic center of Brussels include Grand Place, Town Hall, Mannekin Pis and Delirium.

Despite being a bar, Delirium features in the list of things to do in Brussels for most visitors. The Grand Place is a few hundred meters away and the popular Jeanneke Pis statue is also located across the street. Delirium is always crowded, but still never makes you feel lost or uncomfortable. Considered to be a beer lover’s fantasy, it also found a place in the Guinness Book of World Records.

Interesting Fact – What makes Delirium Bar so special is that it offers patrons more than 2000 types of beer from more than 60 countries and all sorts of brewery memorabilia.

A Ghent and Bruges Day Tour brings you closer to some of the most beautiful historic buildings of Belgium. While on your way to Ghent, you are treated to breathtaking views and an extremely scenic drive which simply sets the tone for an unparalleled experience. Other highlights that are sure to feature on your itinerary include a trip to the Saint Bavo Cathedral, home to the ‘Mystic Lamb’, one of the most popular paintings in the world, a traditional Belgian lunch, Our Lady’s Church, famous for its fascinating history and for hosting Michelangelo’s Madonna statue, Market Square and the Town Hall Square. Roaming around Ghent literally takes you back to the Middle Ages and recreates the romantic atmosphere that the old world was famous for.

A beer tasting tour takes you through the rich brewing history of the city and lets you sample some of the most famous brews of Brussels such as the fruity Chimay, Malheur Blonde, the super strong Trappist and Gueze. This iconic tour involves trips to historic cafes and iconic landmarks and also helps you learn all you need to know about beer tasting etiquettes. The main landmarks covered during the tour include the Royal Puppet Theater, Ilot Sacre and the St. Catherine Fish Market.

Considered to be one of the most fascinating cathedrals, both inside and out, the St. Michael and St. Gudula Cathedral is the perfect spot to enjoy commanding views of the city. This twin-towered cathedral dates back to the 16th century and boasts of different architectural styles due to the fact that its construction took almost 300 years. The most impressive features of the cathedral are life-size statues of the apostles, the white-stone façade, 16th century stained glass windows and a huge oak pulpit.

Interesting Fact – You can go for an underground tour to see the pilings of a Romanesque church which existed on the same site before the cathedral was built.

Most visitors get bowled over by the vast collection of musical instruments that can be found in the Musical Instruments Museum. The museum hosts more than 1200 instruments that are categorized according to their region of origin. The kind of music that each instrument offers is also played on TVs that detect your headphones when you come in range, to increase your understanding of each instrument. A trip to the museum is totally worth it, particularly if you’re a music lover.

Insider Tip – The rooftop café offers some of the best views of the city.

Coudenberg is a small hill that houses the Palace of Coudenberg since the 12th century. It is extremely popular because of its underground tour that allows visitors to discover the remains of the palace of Charles V. Over the years, successive monarchs transformed the fortified castle into a majestic residential palace, which later emerged as one of the most beautiful palaces in Europe. The palace was literally destroyed in the year 1731 due to a fire, and its ruins were pulled down about 40 years later. During a trip to Coudenberg, visitors can discover the ancient structures of the old building which now act as the foundation for the Hoogstraeten House. The house itself hosts the various discoveries that numerous archeological excavations of the Coudenberg site uncovered.

Insider Tip – The surprising lack of crowds makes the underground tour a tad eerie, but if you’re an adventurous fellow, there’s an entire world of underground treasures simply waiting to be discovered.

If a walking tour sounds boring, a jogging tour may just be the thing to do. Jogging is always more exciting and adventurous than walking, and what better place to enjoy a jog than a city like Brussels. Each street in the city center has an ancient European feel to it, each spot has its own story to tell, and there are tons of architectural legends abound. And while on a jogging tour, don’t forget to visit the Mannekin Pis, a popular bronze fountain located close to the Grand Place. The fountain was constructed in the 17th century and it depicts a child urinating.

Interesting Fact – Despite its small size, the fountain draws thousands of visitors, particularly during festive occasions, when the child urinates beer instead of water!

A day trip to Luxembourg may take away 12 hours of your time, but every second you spend on this tour is a second well spent. Explore the scenic Ardennes and be sure to make a stop at the WWII Mardasson-Memorial en-route. Once in Luxembourg, wander along the streets of the historic old town, check out the Kirchberg quarter (home to many EU buildings), visit the majestic Notre-Dame Cathedral (famous for its Renaissance adornments and Gothic architecture) and marvel at the wonders contained in the Palace of the Grand Duke.

Antwerp, an international diamond center and home to Rubens (the famous 17th century artist), opens up yet another chapter of Belgian history on each visit, and introduces you to historic highlights such as Our Lady’s Cathedral (home to two Rubens’ masterpieces) and Marquet Square (home to an exciting collection of ancient houses). The trip will take about 5.5 hours and it lets you explore Antwerp’s rich and beautiful past. During your Antwerp tour, make sure that you see the oldest part of the Antwerp harbor and visit a diamond workshop.

Insider Tip – Antwerp is the best place to delight your taste buds with those fantastic Belgian waffles. They can be found in roadside stalls as well as bars and pubs and are topped with generous amounts of fruit and whipped cream.

The Galeries Royales St-Hubert became popular as the first covered shopping gallery in Europe when it opened way back in the year 1847 and its grandeur hasn’t decreased over the decades. Today, the gallery is home to 54 upmarket brands selling all sorts of goods such as leather products, clothes and books. The Galeries Royales St-Hubert is spread over three interconnected galleries and is home to some of the best brands in Brussels such as Godiva, Neuhaus, Delvaux and Café du Vaudeville. Whether you’re here for some shopping or for window shopping, the experience is totally worth it.

Insider Tip – The various bars and cafes in Galeries Royales St-Hubert are the perfect places to see the world go by. Spending some time here can offer amazing insights into the local culture.