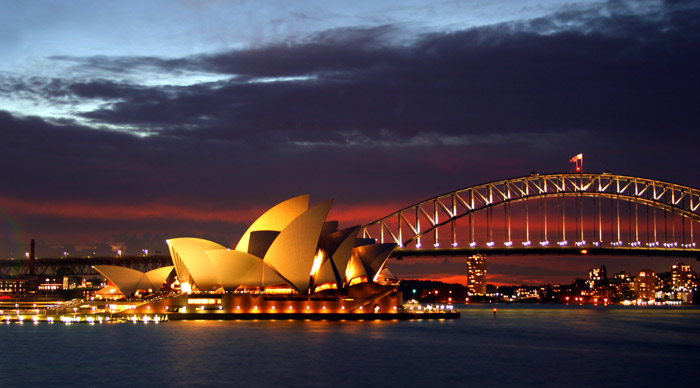 Australia, one of the most romantic countries on the planet, is known for its laid-back lifestyle, breathtaking natural beauty, enchanting rain forests, magnificent coral reefs, beautiful beaches and extraordinary experiences. The country presents a diverse range of sights that are impossible to cover in a single visit, so it always works best to concentrate your explorations on a particular area and explore the region in greater details. Bookmundi makes things easier by reviewing the top attractions to visit in Australia. Choose from your favorite attractions and base your itineraries around these wonders, covering cities and towns that are located in the same region to save on travel time.

Think about Sydney and one of the first places that comes to mind is the Sydney Opera House. Shaped to resemble billowing white sails, this UNESCO World Heritage Site is considered to be one of the greatest archaeological wonders of the world. It boasts of a spectacular location with water on three sides and the Royal Botanic Gardening bordering the south. Bookmundi recommends you to visit Mrs. Macquarie’s Chair in the Royal Botanic Gardens for one of the most beautiful photos of the Opera House. The best way to enjoy the Sydney Opera House is by attending a performance, but you can also enjoy a one-hour guided tour of the premises.

This UNESCO World Heritage Site is one of the most dazzling creations of nature and is the only reef system in the world that can be seen from outer place. Famous as one of the largest living structures on earth, the Great Barrier Reef protects an incredibly fragile and beautiful ecosystem that consists of 600 continental islands, 3000 coral reefs, 300 coral rays and over 1600 species of sharks, tropical fish, clams, rays and turtles. It stretches for more than 2300 kms and is particularly famous for its diving and snorkeling adventures.

The Sydney Harbor Bridge might not be as popular as the great Opera House, but it really gives the star attraction of Australia a run for its money. Famous as the largest steel arch bridge on the planet, this beautiful sight rises 134 meters above the picturesque Sydney harbor and connects the city’s north shore to its CBD area. The best way to explore the bridge and its beauty is to become a part of the Sydney BridgeClimb program that lets you ascend to the very top of the bridge for 360-degree views of the greatest harbor in the world.

Broome, once called the pearl capital of the world, is now a booming tourist town located close the Kimberly region. Broome is mostly famous as home to the Cable Beach, an endless stretch of turquoise seas and silky white sands, which ranks as one of the top beaches on the planet. You can also ride camels and enjoy beautiful sunset views at Cable Beach. Those visiting Broome between the months of March to October would want to check out the Staircase to the Moon, a natural phenomenon that creates an illusion of moonlight creating steps that lead all the way to the moon. Other highlights of Broome include the Broome Crocodile Park, Purnululu National Park and the Broome Historical Museum.

The Great Ocean Road is one of the most beautiful wonders of Australia. This heart-stopping drive stretches over 150 miles from Torquay to Allansford and presents some of the most beautiful and picturesque sights and surroundings on the continent. The star attraction is the Port Campbell National Park, home to the Twelve Apostles, gigantic pillars carved out of limestone cliffs by the raging ocean. Other highlights include the town of Lorne, hiking trails, spectacular waterfalls, dense forests and the Otway National Park. Bookmundi recommends you to book your own rental vehicle and explore the area with your friends or loved ones on your own.

Uluru, formerly known as Ayers Rock, is located in the heart of the country’s Red Circle and is known to be one of the most photographed attractions in Australia. This beautiful monolith boasts of a striking red color and acts as the showpiece of the Uluru-Kata Tjuta National Park, a UNESCO World Heritage Site and home to the Anangu people. The park is also home to bright red rocks that are shaped like a dome and are known as the Olgas. As the sun sets for the night, the Uluru and Olgas start playing with your emotions as they create magical illusions and shapes in the constantly shifting light.

Fraser Island, a UNESCO World Heritage Site located between Brisbane and Bundaberg, is the largest sand island on the planet and is one of the best places to enjoy a four-wheel-drive in Australia. Home to the spectacular Seventy Five Mile Beach and countless shipwrecks, Fraser Island is perfect for those searching for adventure or natural beauty. Sharks, dolphins and whales can be found in the waters surrounding the island while dingoes, bats, wild horses and 300 species of birds guard its interiors. And as you move inland, Fraser Island also introduces you to a number of picturesque creeks and lakes, huge sand dunes and beautiful rainforests that are full of exotic plants and animals. Other highlights include Champagne Pools, a group of fish-filled rock pools, and colored sandstone cliffs known as The Cathedrals. You can access Fraser Island via ferries from Hervey Bay and Rainbow Beach.

Silky sand, sunny locales, exotic sceneries, balmy atmosphere, sexy people and exciting surfing – all the ingredients you need for one of the most enjoyable beach experiences of your life. The Bondi Beach gives you all that and much more. Made immortal by a reality TV show called Bondi Rescue, the Bondi Beach is an ideal spot for a picnic or a stroll and the surfing found here is simply legendary. It is also home to an extremely scenic coastal walk that stretches from Bondi to Bronte and follows the coastline for close to 6 kms. Shops, restaurants and cafes can be found across the street and this is one beach that you ‘must visit’ while in Australia.

Irrespective of where your interests lie, Australia really has something special in store for you. It is home to a diverse range of sights and attractions and is perfect for those once-in-a-lifetime adventures and special occasions.