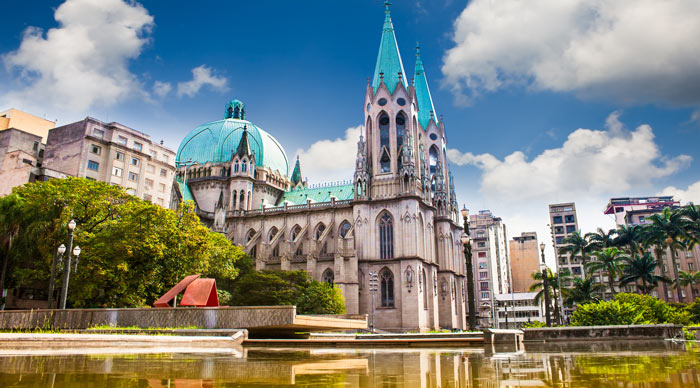 Humongous, intimidating and scary at the first glance, Sao Paulo is nothing short of a monster. But an extremely beautiful one. The smog, pollution and traffic might make the city seem to be difficult, but give it some time and it always grows onto you.

It introduces you to some of the wildest sights in the South American continent and provides a beautiful blend of entertainment and cuisines which completely make you forget all about the lack of natural beauty. Considered to be home to cutting-edge art and world class fashion, Sampa (as the locals love to call their city) has actually been busy showing the world how to live and pick up the pace. The nightlife here is the best in the world, with many sessions lasting until Sunday afternoon! The perfect way to breathe Sao Paulo is to follow the locals into their favorite joints and envy their fascinating lifestyle.

Catedral da Se, also known as the Cathedral of Sao Paulo, was designed by Maximilian Emil Hehl and completed in the year 1954. The church was inspired by Cathedral of Florence’s Renaissance dome, and it used almost 800 tons of rare marble in its construction. It is built on the site of an ancient church which dates back to the year 1591 and is surrounded by interesting buildings. You can always find odd religious sermons going on in front of the cathedral, all sorts of street vendors offering different wares and beggars asking for coins.

Insider Tip – The chaotic scenes on display are known to be very interesting to watch, but remember, this may be the only square in the city where you tend to feel unsafe about your belongings.

The Mosteiro Sao Bento is one of the oldest and most important churches in the city. It dates back to the year 1598 and is famous for its neo-Gothic façade which belongs to the early 20th century. Once you step into the church, the magnificent stained glass is bound to blow your mind away.

Insider Tip – Try to visit the church on Sunday morning at 10.00 AM for Sunday Mass. The mass includes Gregorian chanting, something worth experiencing.

Museu de Arte de Sao Paulo is the city’s most comprehensive and best museum. Famous as a modernism classic and Sao Paulo’s pride, this museum is home to the best collection of Western art in the Americas. The collection ranges from Manet and El Greco to Picasso and Goya, and the Impressionist era paintings are particularly worth watching. Other works worth mentioning include three artworks by Candido Portinari.

Insider Tip – Visit the museum on Sundays. The concrete plaza on which it hovers transforms into an antique fair each Sunday. This fair is the perfect place to uncover things like clothes, old stamps, a variety of crafts and masks at affordable prices.

Mercado Municipal is a covered market dominated by a series of domes and beautiful stained glass. It specializes in dried goods and fresh produce and is an ideal Sao Paulo destination where you can try out classics such as mortadella sandwiches and pasteis.

Insider Tip – The market hosts live music shows on Sundays, and is also closed for maintenance on one Sunday each month. Make sure that you enquire beforehand so that you don’t end up missing on those delicious sandwiches and other delights.

Household appliances, old keychains, antique bikes – you can find all sorts of things stuffed in this micro-neighborhood. It is considered to be a junkie’s heaven and is most famous for its Brazilian microbreweries. Lip-locked lesbians and gearheads might be common in the area, but you’re always bound to have a good time in Caos.

Teatro Municipal, the most fascinating construction in Sao Paulo, was designed in the year 1903, inspired by the Paris Opera. Its façade is known to host each and every architectural style that you can think of – right from art nouveau to baroque. The interiors are clad in marble and gold, and the theater hosts some of the best ballet, opera and classical music performances in the city. The auditorium has been designed with marble, mirrors, gold leaf and moss-green velvet and can seat up to 1500 people. The first play to be presented in the theater was Hamlet, and the opera house actually went on to host luminaries such as Anna Pavlova and Isadora Duncan.

Insider Tip – Although the theater is only open for people attending cultural events, you can arrange for a prescheduled visit to explore its beauty and architecture.

Pinacoteca do Estado is a beautiful neoclassical museum that hosts Brazilian artworks which date all the way back to the 19th century. Some of the biggest names featured in the gallery include Paulista, Di Cavalcanti and Portinari.

Ibirapuera Park is to Sao Paulo what Central Park is to New York City. It is the biggest urban park in the city and is very popular among the locals. People come here early in the mornings or late in the afternoons for leisure, walking, jogging or spend some time away from the concrete jungles of Sao Paulo. The park also hosts free concerts on weekends as well as three important museums.

Insider Tip – The Japanese garden located inside Ibirapuera Park is worth visiting.

Liberdade was originally the place where Japanese immigrants settled in Sao Paulo, but slowly became more vibrant and colorful as the Koreans and Chinese also began to move into the area. Today, the area is a Chinatown-like district that is perfect for those searching for oriental-styled attractions and cuisines in Sao Paulo.

The Museu Afro-Brasil, located in Parque do Ibirapuera, is one of the most important museums in the city. The 3rd floor collection chronicles close to 5 centuries of African immigration. The rotating Afro-centric exhibitions held on the 1st and 2nd floors are also known to be equally fascinating. With more than 4000 costumes, paintings and photographs on display, the museum is perfect for understanding the history and culture of Africans in the Americas.

Santo Grao may be a simple coffee haunt in Sao Paulo, but it certainly warrants a visit. It is the most serious coffee joint in the city and the cappuccinos that are served here are known to be a touch above the rest. The café is located in an open terrace, which also makes it the perfect place for caffeine-inspired conversations. And if you’re looking for some rare eats, Santo Grao serves things like huevos rancheros and waffles and pistachio-crusted salmon.

Insider Tip – If you’re interested in people watching while in Sao Paulo, Santo Grao is the best place to visit.

Think of Paulista Avenue as Sao Paulo’s version of the Times Square. Located in the heart of the city, this is where thousands of people come searching for work or searching for entertainment and culture. It is also known to be the most loved avenue in Sao Paulo, which means that walking and window shopping are the best things to do here. From imposing buildings and cultural centers to a park and a museum, you can find all sorts of things in Paulista Avenue. Some of the main attractions located here include Centro Cultural Fiesp, Museum of Image and Sound, MASP, Brazilian Museum of Sculpture, Caixa Cultural Galeria Paulista, Shopping Paulista, Itau Cultural Institute, Centro Cultural Sao Paulo and Shopping Center 3.