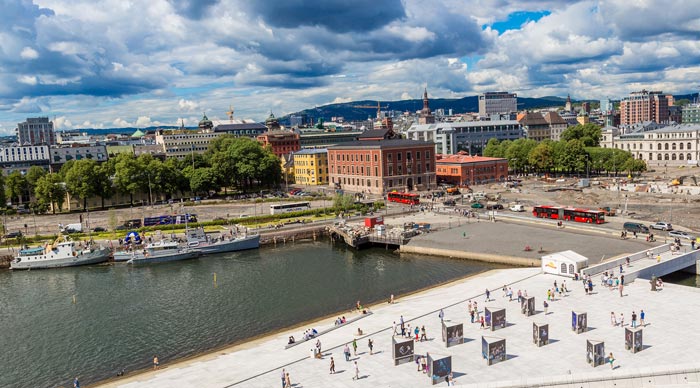 Oslo, a place that is home to some of the finest creations of Mother Nature, always ranks very high in the travel lists of any nature lover. Despite its outstanding natural beauty and spectacular scenery hogging away all the limelight, Oslo also emerged on the travel map as a fun destination because of its artistic flair, splendid historical attractions, unique culture, world-class museums and rich Vikings history.

Add a thriving nightlife, a beautiful café scene and amazing restaurants into the mix, and you have the perfect ingredients for one of the most intoxicating adventures of your life. Here are some of the top best things to do in Oslo.

Even today, years after being decommissioned, those sleek Viking ships present an intimidating image. The Viking Ship Museum is home to the Gokstad and Oseberg, two of the most well preserved Viking ships on the planet. It is also home to a third ship, the Tune, but very few fragments of this ship remain. All three ships were constructed in the 9th century by the world famous adventurers and were used as tombs for Viking nobility, who were buried along with their carriages, food, furniture, jewel and servants. The remains of many such items are also displayed at the museum. The most impressive ship is the 22m-long Oseberg, which features elaborate serpent and dragon carvings. Its burial chamber also possessed the largest collection of Viking artifacts that the world has ever seen.

Insider Tip – Go up the small staircase to get a better view of the historic Viking ships and take exciting pictures.

The Bygdoy Peninsula is one of the best areas in the city that always offers so much to see and do. It is full of interesting museums and picturesque walks, and just looking at those local houses is also known to be a lot of fun. What makes this area so special is that despite being located very close to the city center, it retains its rural character.

Insider Tip – You can easily cover the major sights that Bygdoy Peninsula has to offer in half a day, but it always makes sense to dedicate a few extra hours.

The TusenFryd Amusement Park is the largest amusement park in Norway. It features a number of exciting games, over 30 attractions, a number of eateries and unique shops. It has something for people of all ages, right from exhilarating rollercoaster rides and vintage carousels to idyllic log rides. The park is located at a distance of 20kms from the city center, and can be easily accessed by a bus that departs from the city center.

Insider Tip – Don’t miss out on a date with the Speed Monster, the most spectacular roller coaster, while visiting the TusenFryd Amusement Park. The ride is themed on racing cars, and its acceleration is actually faster than those Formula One racing cars!!

Cycling through the fascinating streets of Oslo offers an experience that simply cannot be described in words. It lets you explore popular landmarks such as the City Hall, Royal Palace and Akershus Festning at your own leisure and also introduces you to the many castle grounds and parks that the city has on offer. This tour is perfect for people of all ages and all fitness levels. There are plenty of stops for photo opportunities as well. Start your bike tour at the Viking Biking Store and cycle on the car-free paths of the Oslo Fjord to enjoy enchanting views of the surrounding hills and the city harbor. While on a cycling tour of Oslo, don’t forget to ride through the Frogner neighborhood, a breathtaking neo-classical neighborhood that is a must visit while in Oslo.

Located in the Botanical Garden of Oslo, the Natural History Museum hosts two different museums – the Geological-Paleontological Museum and the Zoological Museum. The former contains artifacts which narrate the history of the solar system and an exciting collection of moon rocks, minerals and meteorites. The latter is home to a vast variety of native wildlife. Both museums offer an exciting insight into the natural history of Oslo, and are considered to be a must-see while in the city.

Interesting Fact – The Geological-Paleontological Museum is home to Ida, the oldest complete primate fossil in the world. It also features a nest of dinosaur eggs (don’t get too close lest they hatch right in front of you!!!) and a 10 m iguanodon skeleton.

A fjord sightseeing tour of Oslo takes you through the hidden waterways of Oslo Fjords and brings you face-to-face with some of its most dramatic landscapes that have been carved out of living rocks over millennia. The Oslo waterways are considered to be a photographer’s fantasy and a 2-hour boat tour is perhaps the best way of taking in the superb scenery on offer at your own pace. The boat passes through deep bays, narrow sounds, a plethora of islands and picturesque houses, and brings you closer to the Norwegian coastline in the best manner possible.

A trip through the Oslo Fjords on board a traditional Norwegian boat is unlike anything that you shall experience in Oslo. Breathe in the picturesque Nordic beauty and delight your eyes with the spectacular views that this journey offer. For your 3-hour cruise, sail through the Dyna Lighthouse, sheltered bays and the Hovedoya Island and capture award-winning shots on your camera. Finally, enjoy an exhilarating blues performance while you feast on a traditional shrimp buffet, and choose from a variety of beverages and cocktails at the cruise bar.

The Akershus Festning is strategically located towards the east of the Oslo harbor. This medieval era castle and fortress is by far the best architectural highlight in the city, and is full of history and culture. There are several interesting buildings and museums inside the massive complex, and a tour of the old palace is always recommended. Even if you don’t get into the castle, you can enjoy a walk in the park and explore the fortress houses. Expect to see a lot of history during the walk, as it is common to see people playing old instruments and dressing up in traditional costumes.

Insider Tip – Entry into the Akershus Festning is through the gate located at the end of Akersgata. A more exciting way to enter the fortress is through the drawbridge which spans the Kongens gate.

The National Gallery features on most lists of things to do in Oslo and is famous as one of the premier landmarks in the city. It is home to the greatest and largest art collection of Norwegian Art, and it also includes works from the Romantic Era as well as works from the 1800s to WWII. Some of the best known creations of Edvard Munch, including his most famous work, The Scream, are displayed here. Other popular artists whose works have been featured at the gallery include Renoir, El Greco, Matisse, Picasso, Monet and Gauguin.

Insider Tip – If you’re a Harry Potter fan, the museum also offers a world famous Harry Potter painting, something which you cannot miss out on at any cost.

A hop-on hop-off tour is the perfect way to enjoy an unparalleled experience of some of the top sights and attractions that Oslo offers to its visitors. The tour offers a 24-hour pass and lets you explore the main attractions at your own pace, in a double-decker bus. The open-top bus also offers sweeping 360-degree views of the city and audio guides which let you learn more about the city’s rich and illustrious history. Some of the top attractions that can be covered during the hop-on hop-off tour include the Ibsen Museum, Oslo City Hall, Norwegian Maritime Museum, Oslo Opera House, Viking Ship Museum, Oslo Central Station, Norwegian Maritime Museum, The Royal Castle and Aker Brygge.

The Fram Museum is home to the Polar Ship Fram, the same ship that was used by Roald Amundsen during the first successful South Pole expedition in the year 1911. A trip to this museum always offers a bone-chilling experience, because it perfectly recreates the experience that those explorers went through in the form of photographic displays, personal artifacts and narrations of their daily life. Visitors are also allowed to climb on board the Fram, where they can not only see the clothes that the explorers wore, but also check out the instruments that they used to record core samples, climatic information, etc.

Insider Tip – Once you climb on board, make sure that you go down the hold to the place where the sled dogs were kept. There is a mesmerizing collection of photos which show the Fram trapped in polar ice here.

The Vigeland Sculpture Park has often been called one of the most beautiful parks in the world. It is also famous as the largest single artist sculpture park in the world, and has emerged as one of the top things to do in Norway over time. The park offers an in-depth look into Gustav Vigeland’s 200 oddly-fascinating sculptures, many of which are highly unusual in their shape and are fun to take pictures with. The sculptures are made out of wrought iron, granite or bronze, and are placed in 5 different units – the Bridge, the Wheel of Life, the Main Gate, the Monolith Plateau and the Fountain.

Sure you came to Norway to see those spectacular fjords, but there is no need to feel guilty while checking out the urban attractions that Oslo has to offer. With the kind of exotic history and arts on display, it is normal for most travelers to deviate from their itineraries to add more of the city into their holiday.