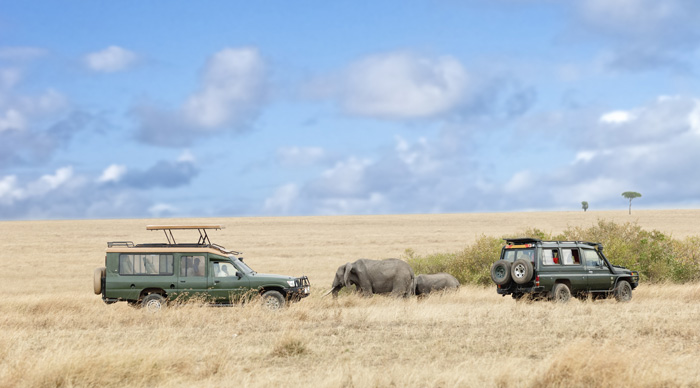 Wildlife safaris, ballooning over the Masai Mara, trekking Mount Kenya and snorkeling in Malindi are some of the most popular attraction of Kenya.

Kenya makes you fall in love with the African continent and it tends to cast a spell on its travelers, something which promises that you will never walk alone in this African extravaganza. It introduces you to a proud set of people whose daily struggles and history talks of the story of an entire continent. It also presents lions, cheetahs, black rhinos, elephants, leopards and much more at their beautiful best. We present you with the Top 12 Best Things to do in Kenya:

Masai Mara, the most popular national reserve of Kenya, has been named after the local Maasai people who live here. The Masai is an extension of the Serengeti Plains of Tanzania and is considered to be one of the most wildlife-rich spots in the planet. It is perfect for watching lions, leopards and cheetahs, but is most famous for its crocodile-infested Mara River and its spectacular wildebeest migration that takes place each year.

Lake Nakuru boasts of a dramatic locale in the Rift Valley. It is full of algae that attracts millions of pink flamingos and is home to one of the best rhino sanctuaries on the planet. Apart from spotting a healthy concentration of black and white rhinos, you come across a leopard or two in those humongous yellowwood acacia trees. You can also see as many as 450 species of birds, pythons, warthogs, lions and waterbucks in the lake and its surrounding areas.

Mombasa, the second largest city in Kenya, ranks high on travel lists because of its rich Swahili flavor. Its old town is dominated by narrow streets that are among the best places to understand the Kenyan culture and mingle with the locals. The Old Harbor presents fascinating views of sailing dhows and the light and sound show at the Fort Jesus is equally popular. However, the most exciting thing to do in Mombasa is to buy khanga and kikoi cloths. Bookmundi recommends you to visit the Makupa market, the main market in the city and the best place to buy local souvenirs. You can also plan a trip to the Bombolulu Workshops and Cultural Village, where disabled locals create excellent crafts, jewelry and leatherwork.

If you’ve seen and liked the Oscar-winning movie Out of Africa, you’ll fall in love with the Karen Blixen Museum. This museum was the farmhouse where Karen Blixen lived between the years 1914 and 1931. She left the country after numerous personal tragedies, but her farmhouse has been preserved in the form of a museum. The museum is a beautiful place to wander around and check out popular locations from the movie.

Lamu is located on an offshore island close to the Somali border. It is a charming Swahili city that is home to numerous mosques, old-world Arab houses and carved wooden doors. The main highlights of your Lamu explorations are bound to include the Lamu Museum, the Fortress and the Swahili House Museum. What makes Lamu so special is that it has remained untouched by tourism and has unspoiled beauty on offer. As the oldest living town of Kenya, it also presents centuries of character and charm. The island has no roads and there are very few motorized vehicles here.

Amboseli National Reserve is one of the most popular tourist spots in Kenya. It is an ideal place to see large concentrations of elephants from up close. Other forms of wildlife found here include gazelle, eland, impala, waterbucks, giraffes and more than 600 species of birds. Nature lovers are allowed to explore 5 beautiful habitats that range from wetlands full of sulfur springs to the dried beds of Lake Amboseli. You can also interact with a number of local Maasai people who live here.

Zanzibar, or Spice Island, requires a 90-minute flight from Mombasa, but is entirely worth the effort. It is full of enchanting white sand beaches that are lined with mangroves and palms. The island is also home to places like Prison Island, known for its giant tortoises.

Nairobi had a constant presence in world news for all the wrong reasons. It got the nickname Nairobbery when carjackings, muggings and kidnappings all but emptied out tourists, but has dramatically managed to change its character over the past few years. It is home to one of the biggest slums on the planet and is still relatively unsafe, but there are pockets of Nairobi that offer a safe haven for tourists and let them explore this beautiful city without having to worry about their safety. This is where professional Nairobi tours come into play. They let you explore the colorful colonial history and cosmopolitan lifestyle and introduce you to its most beautiful gardens and best places for Tusker beer as well. Other highlights include the Nairobi National Museum tour, the Karen Blixen Museum tour and the Nairobi National Park tour.

Explore the Coral Coast of Kenya

You have a choice between surfing, swimming, snorkeling, sailing and waterskiing when you visit the coral coast of Kenya. The best and most luxe resorts can be found close to Mombasa. Popular options include Kilifi, Daini Beach, Bamburi, Malindi and Nyali. Bookmundi recommends watersport lovers to make Naivasha their base.

The Great Rift Valley is one of the most fascinating things to see while in Kenya. The country is defined by a huge network of lakes and rivers and is also home to the second largest freshwater lake on the planet. Lake Bogoria is an ideal place to start your explorations as it is full of beautiful geysers and skin-loving hot springs. The rich geological phenomena also makes it perfect for your cameras.

Hell’s Gate National Park may be small in size, but it is big on dramatic scenery and natural beauty. The park has been named after a narrow break in its cliffs that once acted as a tributary for a prehistoric lake. Hell’s Gate is unique in the sense that tourists are allowed to walk or cycle without having to use the services of a guide and it is full of dramatic scenery at each and every step. Some of the most common animals found here include cheetahs, leopards, lions and more than 100 species of birds.

‘Shetani’ is a Kiswahili word that translates to ‘devil’. It is used to refer to the lava flows that were formed hundreds of years ago. The locals believed the lava to be the devil emerging from the earth and hence the name. This monstrous expanse of black lava spreads over 50 sq. km. and presents strange looking scenery all along. Also famous are the Shetani Caves, a network of caves that was created as a result of the volcanic activity. You can explore the caves but Bookmundi advises caution as many are full of hyenas and razor sharp rocks.

Kenya is definitely a holiday of a lifetime. It presents wildlife in an entirely new light and no other country on the planet can provide the kind of experiences that this East African hub has on offer. However, Bookmundi advises some caution when visiting many destinations in Kenya as there are pockets of the country that are still considered to be unsafe for tourists.