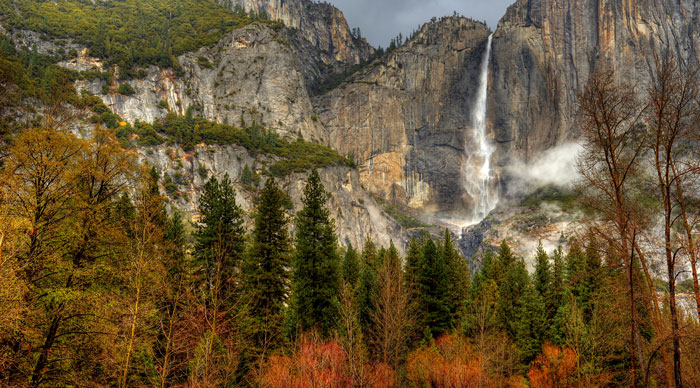 The world is full of places to see and explore and we hardly ever have enough time on our hands to see it all. In most cases, we’re stuck to our desks, clicking the same old hours, ticking off days, working the same jobs, waiting for that time of the year when we go for our solitary vacation – that one shining jewel in an otherwise uninspiring year.

This is why it is essential to ensure that you get your destinations right. To help you make the right selections, Bookmundi presents a list of the most popular vacations of 2015. Each destination in this list is there for a reason. It offers the very best in its category.

The Yosemite National Park is a special place where Mother Nature presents some of her most scintillating displays. Covering an area of 1200 sq. miles, Yosemite is full of beautiful meadows, enchanting waterfalls, mysteries valleys and breathtaking flora. The summer months present a range of adventure activities such as fishing, hiking, trekking, rafting and rock climbing and there are special lodging options available for those wanting to spend the night in Yosemite as well. For those interested in nature, Yosemite is also the starting point for the John Muir Trail, one that covers 211 miles of mind-numbing beauty through the Sierra Nevada Mountains.

Norway has always been associated with the inspiring Northern Lights phenomenon. Although this beautiful display of lights can be seen from a number of countries in the north, few come close to offering the awe-inspiring vistas Norway is so famous for. The movie Frozen also inspired travelers to visit the country and explore its rare fjords and ancient churches and Disney honchos also scrambled to transform the 2700 passenger Disney Magic into a magical extravaganza.

A surprising entry in this year’s list of the most popular vacations of 2015 is Dharamsala, a sanctuary that many Indians are yet to explore. The place has always been a popular pilgrim destination as visitors come to see the Dalai Lama, but it is slowly opening its borders to the travel world as well. New Eco-lodges opened up in the year 2015 to attract visitors with their Modernist architecture, unparalleled views, luxe amenities and the very best of yoga. And while in Dharamsala, you can also explore historic temples, remote spots in the Himalayan foothills and old bazaars. Bookmundi recommends you to visit Dharamsala in time for the Dharamshala International Film Festival, one of the most celebrated festivals of Northern India.

Leipzig continues to soar charts with its flourishing arts scene and year-round event calendar. Popularly called the New Berlin, Leipzig is where you go for street theater, music events, live shows, grand celebrations, fine arts, excellent cuisines and great wine. The best place to be in Leipzig is the Plagwitz area, where you come across a number of former factories that have been revamped into art galleries, live music venues and photography museums.

Miami featured in the list of the most popular vacations of 2014 and it manages to hold onto its spot this year as well. What makes Miami so special is that it feels like a unique place that has been specially made for the hottest of men and women on the planet. The trendy SoBe area is where you meet the sexiest people alive while neighborhoods such as Little Havana offer that seductive Cuban flavor to your tours. Better yet, the city isn’t just about its parties, surf and sand. It also presents iconic arts, exciting music venues, grand festivals, scenic restaurants and hip bars.

Utrecht just might have the worst luck possible. As if Amsterdam and its global appeal was not enough, the city now has to compete with Rotterdam and its growing popularity for the traveler’s attention as well! Utrecht is just as beautiful and exciting as either of the two, but simply not as popular. Thankfully, all that might have changed with the city securing the Grand Depart of the Tour de France, the perfect venue to showcase its cycle-friendly adventures and fascinating beauty. The canal-lined city center transports you of Bruges and the countless chic restaurants and cafes have a Parisian feel to them. The intellectual vibe and university going crowd takes you of modern-day Brisbane while those historic attractions and friendly locals remind you that you’re still in the Netherlands.

Hong Kong narrates the tale of two cities. One that has been quick to bulldoze the past, hide the rubble under the carpet, wear a glitzy Vegas-like sheen and attract visitors with larger-than-life casinos and over-the-top resorts. And the other that still manages to remind you of its history, old-world opium dens and quaint neighborhoods through a mix of pop-up shops, street food stalls, street arts, murals and former warehouses that have since been transformed into tourist attractions, hotels, art galleries and more. And both promise undeniable pleasures and incredible experiences to the modern-day traveler.

Croatia owes a lot to the Game of Thrones. The iconic TV show has done more for Croatia tourism than most of its attractions combined. A mere trip to the medieval town of Dubrovnik brings back images portrayed as King’s Landing in the show. And it isn’t just King’s Landing! Klis Fortress is where Daenerys defeats the Meereen, Diocletian’s Palace hosts her Throne Room, Mineeta Tower represents the House of the Undying and St Dominika Street hosts countless market scenes and City Watch scenes. To back its claim even further, Croatia also boasts of the presence of exotic festivals such as Croatia Rocks, which help it to emerge as one of the hottest and most happening destinations of Europe.

It has been a while since Haiti experienced that tormenting 7.0 earthquake that all but destroyed the island and a trip to the Haiti of today shows you the remarkable feats that man can achieve. What was once left in a rubble has now been transformed into an even better version of its former self. New hotels opened and a number of beautification projects were completed in the year 2015 and tourists soon found their way back to the islands lured by the promise of sun, sand, surf and adventure. Haiti is a haven for adventure lovers and its itineraries literally revolve around learning more about voodoo folklore, navigating countless caves, learning how to cook Creole dishes and sampling rum at local distilleries.

The mineral springs of Bath were discovered by the Romans millennia ago, but their true potential is still yet to be tapped. 2015 saw the opening of the grand spa hotel, the Gainsborough, which offers direct access the area’s thermal waters and presents Roman-styled pools and a 2-storey spa. Mineral springs are an obvious delight, but Bath’s popularity is also because of attractions such as the Holburne Museum, the Circus and the Bath Racecourse as well as adventures such as hot air balloon flights, Stonehenge tours and Longleat safaris.

These were just some of the destinations that the world was talking about in the year 2015. Stay tuned to our Year in Review theme to find out more about everything that this very special year gave us when it came to travel and tourism.