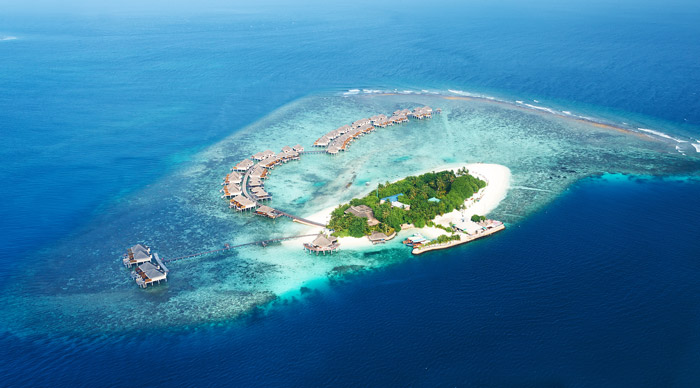 The world is full of breathtaking sights and attractions that attract travelers from all over. Traveling is an excellent way of understanding everything that Mother Nature has to offer, but travel also leads to all kinds of issues, issues that may be forcing some of the top travel attractions around the world to disappear. Diminishing natural resources, rising sea levels and threat of increasing pollution are other factors responsible for the destruction of natural wonders, many of which have survived for at least 7000 years. Here are a few places that you must visit before they may be extinct.

The Maldives are famous as one of the coolest luxury travel destinations on the planet. From underwater restaurants to over-water bungalows, the islands are home to all things exotic. Considered to be a haven for couples and honeymooners, the Maldives also find a place in most traveler bucket lists. However, it would make sense to visit the Maldives as soon as possible, for the islands could soon be completely under water. The effects of global warming are forcing sea levels to rise with every passing year, and scientists estimate that the Maldives would be the first nation to get submerged under water. The government is already taking the issue very seriously and is planning to buy lands in other countries like Australia and India to host its future population.

The Galapagos Island consists of 19 islands that are scattered in the Pacific Ocean. It was shaped by a series of volcanic eruptions and were among the few destinations that were relatively untouched by man. As a result, all kinds of rare animals found a place on the islands. From giant tortoises and countless rare birds to penguins and land iguanas, Galapagos is home to some of the best wildlife on the planet. It was here that Charles Darwin came up with his theory of evolution as well. However, mankind has finally caught up with this exotic landmass and the increasing tourism is causing all kinds of threats to its natural ecosystem. Cruise ships are bringing pests such as cockroaches and rats and people are bringing in pets, all of which compete with the 9000 local species for food and create an imbalance in the ecosystem.

The Belize Barrier Reef is one of the most beautiful and diverse reef ecosystems in the world and is home to all kinds of exotic sea creatures such as manatees, sharks, conch, spiny lobsters, rays and sturgeons. The Belize Barrier Reef is also expected to disappear in the coming few decades due to coral bleaching. A section of the reef that stretches from Honduras to Mexico had suffered from massive bleaching in the year 1998, and this led to a loss of 50% of the corals in the area. As the effects of global warming continue to affect the world’s seas and oceans, the barrier reefs continue to suffer from degradation and extinction.

Madagascar is extremely unique in terms of its flora and fauna. In fact, 80% of the plants and animals found here exist only in Madagascar. However, the local ecosystem has been greatly affected by threats of poaching, burning and logging. If actions are not taken to stop the natural destruction, the forests of the fourth-largest island in the world shall disappear in the next 35 years.

The Dead Sea has always ranked as a popular travel destination because of the kinds of healing benefits that its waters are famous for. However, the Dead Sea gets most of its water from the Jordan River, and with the surrounding countries using up all of the river’s resources, the Dead Sea is hardly getting the kind of water it needs to sustain. In fact, within just 40 years, it has diminished by a third and has sunk by more than 80 feet. There were restaurants and resorts that once overlooked these salty waters, but are now miles away from the shore. Scientists estimate that if the Jordan River continues to be misused, the Dead Sea could disappear within the next 50 years.

The Everglades are perhaps the only place on the planet where alligators and crocodiles live in the same waters. The thought sounds incredibly scary, but it also feels extremely alluring and intriguing. And now might be the only time to visit these fragile wetlands as they are under constant threat due to farming pollution, invasive species and development. The wetlands are already half the size of what they were a century ago and much of the unique species found here are getting extinct as well.

Venice. One of the first places that you think of when it comes to planning destinations for your honeymoon, at least among Europeans. Venice is incredibly romantic, extremely adventurous and breathtakingly beautiful, but it might not be around for long. The city sinks 1/10th of an inch each year, and experts predict that it will descend 3.2 inches by the year 2032. This is causing a terrible impact on the city’s foundations and the constant erosion means that Venice could soon be lost to the world.

Like the Belize Barrier Reef, the Great Barrier Reef is also diminishing. Divers who haven’t seen the most beautiful diving spot on the planet yet need to visit Australia soon. The ever-increasing temperatures of the Coral Sea, the constant pollution and increased fishing is forcing the Great Barrier Reef into extinction and experts estimate that this 7000-year-old reef could be dead within the next 40 years.

Mother Nature took millions of years to make the planet as beautiful as it is today, but man only took a couple of centuries to put all that hard work to waste. If we continue destroying the planet and its natural resources at our current rate, there won’t be anything left to save, and neither a place to live.

You can certainly do your part in trying to reduce the impact of pollution, but you should also try and visit a few destinations on this list as soon as possible, as long as you take care of their habitats. Now, might be your last chance of seeing some of the world’s top nature destinations at their beautiful best.

Bookmundi is planning to increase its focus on eco travel around the world, so as to ensure that we leave as small an imprint as possible. We will keep you informed hereof during 2015.