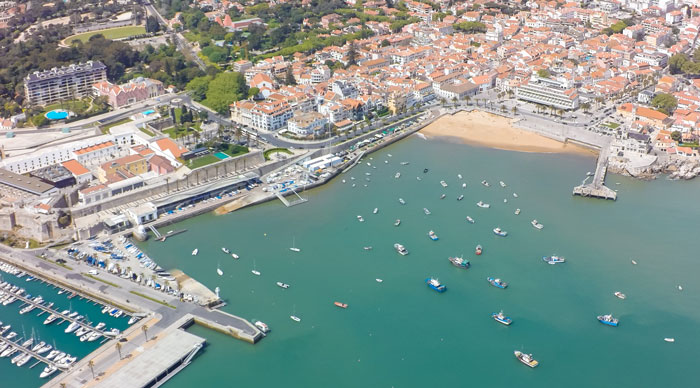 Cascais, a picture-perfect, postcard-worthy fishing town, is located on the western edge of the coastline of Lisbon. It took a while for Cascais to wake up from its sleepy fishing village slumber and transform into the go-to summer playground for wave-loving lisboetas.

Those 19th century residences, traditional fishing harbor, historic city center and breathtaking beaches are its obvious draws, but Cascais also presents a sense of character which makes travel interesting and exciting. Travelers fall in love with the beach and the surf, but they also tend to explore winding lanes and unique museums in the afternoons, spend the evenings in beautiful gardens and enjoy alcohol-fueled parties after dark.

How to Get There

The best way to travel to Cascais is to board a train from Lisbon. The train journey takes roughly 40 minutes and leaves you right in the middle of the city center. Other options include buses and car rentals.

Cascais was a small fishing town that emerged around the 12th century and enjoyed natural protection at the mouth of the Rio Tejo. It fell into the hands of the Spanish in the year 1579 and changed hands to the French army in the year 1807. Cascais also witnessed growth and prosperity in the early parts of the 19th century after King Luis I decided to convert the town fortress into his summer residence. Soon, the city became one of the most fashionable and stylish towns in the region. However, despite its growth, Cascais mostly remained famous as a summer destination, thus managing to hold onto its sleepy, old-world atmosphere even today.

The Beaches of Cascais

Beaches are the star attractions of Cascais. Clean and clear waters and exotic locales aside, most beaches boast of superb infrastructure and outstanding facilities. The town’s beaches can be divided into two different categories – delightfully lazy urban beaches that are surrounded by palaces and coves, and wild northern beaches that are surrounded by rugged cliffs and are perfect for windsurfing, kite-surfing and paddle surfing (some SUP surf also).

The Guincho Beach, located at a distance of 5kms from the city center, is one of the most popular beaches in the area. Those familiar sights can be attributed to the opening sequence of the 007 movie On Her Majesty’s Secret Service. The beach presents a beautiful fusion of white foamy waves, golden sands, clear skies and a mystical orange rock that just stands there challenging you to take the plunge. Guincho is perfect for watching romantic sunsets or surfing.

Casino do Estoril is the very first casino of Europe, is located in Estoril, about 20kms from the Lisbon International Airport. It presents one of the best and most animated experiences of the area and is particularly famous for its constant innovation, extensive exhibitions, a beautiful art gallery, thrilling shows, amazing restaurants and two exciting night clubs. With more than 1000 gaming machines and numerous betting tables, Casino do Estoril also offers all the gambling action you could possibly need. The Black & Silver Room and the Panoramic Room are the most popular areas in the casino.

You don’t need to venture beyond the Sintra-Cascais Natural Park to get your fill of Mother Nature while in Cascais. The park covers roughly one-thirds of the Cascais region and is one of the very few examples of how man and nature managed to co-exist over time. The park presents all kinds of stunning landscapes that range from beautiful lagoons and dreamy sand dunes to lush forests and imposing coastlines. In the midst of all this beauty lies the majestic Serra da Sintra Mountain, a UNESCO World Heritage Landscape, which still manages to captivate its visitors the way it used to centuries ago. The Sintra-Cascais Natural Park isn’t just famous for its landscapes. You can also see all kinds of wildlife such as badgers, foxes, wild rabbits, horse-shoe bats, the peregrine falcon and the rare bonelli eagle.

Bookmundi also recommends you to visit the Boca do Inferno, popularly known as Hell’s Mouth. This unique cliff formation was carved by the continuous pounding of the Atlantic Ocean which led to the creation of a small cave that subsequently collapsed to form a natural arch and a small bay.

Museums and Palaces in Cascais

Start off your adventure at Cascais Citadela, a magnificent 16th century fortress that was originally built to protect Lisbon. Today, the fortress houses a luxe 5-star hotel, the perfect place to stay in while visiting Cascais. The Cidadela Art District and the Presidential Museum are also located within the fort.

Condes de Castro Guimaraes Museum & Library is another popular attraction in Cascais. Located inside a small cove, it presents one of the best examples of revivalist architecture and showcases a wide range of exhibits that include pre-historic archaeological remains, a beautiful art collection and rare examples of Indo-Portuguese furniture.

Not exactly in Cascais, but you won’t want to miss out on the Sintra National Palace, located within driving distance. Famous for its two huge chimneys, this is one of the most popular landmarks in the area. The oldest parts of the structure date all the way back to the 12th century and it also presents an interesting mix of architectural styles and influences due to the countless extensions and innovations carried out over centuries.

Sports and Activities in Cascais

Cascais isn’t just about old-world Europe, medieval-era attractions, scenic beaches and natural beauty. It also presents a plethora of adrenaline-pumping activities and leisurely sports that attract adventure lovers and sports enthusiasts. The city is home to seven beautiful 18-hole golf courses and has emerged as one of the top golf destinations in Europe. It also boasts of a modern marina and presents great locales for sailing. Other popular things to do in Cascais include surfing, body-boarding, windsurfing, hiking, trekking, horse riding, hang-gliding, paragliding and mountain biking.

Cascais enjoys beautiful weather for most parts of the year. The climate is at its beautiful best between spring and autumn and the months of May to September are perfect for visiting Cascais. The summers tend to be incredibly hot, which means that you might find sightseeing and explorations to be particularly draining. And the winter months can be termed as unpredictable at best. The weather is too cold for the beach and there are equal amounts of wet gloomy days and bright sunshine.