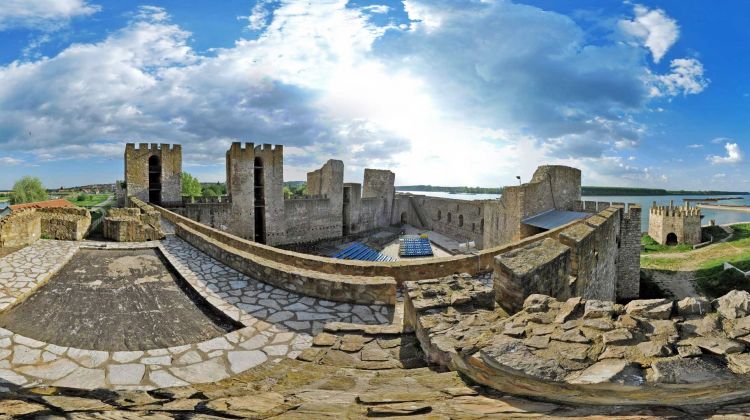 HIGHLIGHTS
We invite you to travel in time to a period of legions and hordes, knights and winemakers. Discover the secrets of the Roman legacy, Byzantine culture and Serbian history on this journey down the Danube river. Enjoy the autochthonous wines made out of Serbian grape sorts. Smederevo and Viminacium await you!

For centuries, Smederevo was the gate between East and West. Romans had a large settlement, and Serbs had the last Medieval capital here. It was the first Roman city devastated by Atilla the Hun, and the last Serbian city that fell under the Ottoman reign.

Morning departure from Belgrade to Smederevo, the medieval fortified city and temporary capital of Serbia in the Middle Ages. Sightseeing of Smederevo fortress, the largest medieval lowland type of fortresses in Europe.

Modelled after the fortress of Constantinople, its foundation was build in the shape of a scalene triangle. Surrounded by water on all sides, with numerous towers and walls as thick as four meters, and it withheld enemy attacks for a long time.

Traditional lunch followed by a visit to the winery.

Local wine cellars are part of centuries old wine tradition of this geographical region. Its tasty wines are hiding stories waiting to be told and hedonic sips to be relished during degustation time.

Drive to Viminacium archaeological site, in Moesia province, an important economic, military and strategic centre in Roman times. It lies on the Roman road Via Militaries. Relax and walk around the impressive historical and cultural Complex of Viminacium.

Other Practical InformationA dress code is required to enter places of worship and selected museums. No shorts or sleeveless tops allowed. Knees and shoulders must be covered for both men and women. You may risk refused entry if you fail to comply with these dress requirements. There is an amount of walking included at customers pace, so we recommend comfortable walking shoes.
NEED HELP OR HAVE A QUESTION ABOUT THIS TOUR?
If you have any question about this tour or need help with planning a trip, please do not hesitate to get in touch with us. We're ready to help.
Get help
hours 08 From US$ 548 Flat Rate
CHECK AVAILABILITY
Response Time: 2 hours Response Rate: 100% MAKE AN ENQUIRY