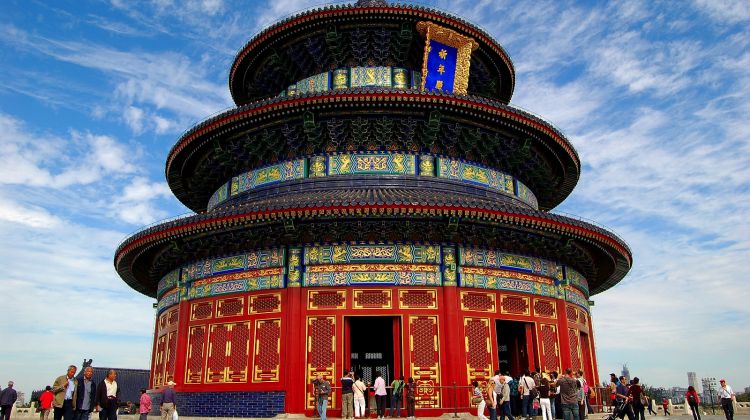 HIGHLIGHTS
Visit some of the highlights of Beijing on this one-day tour to Tiananmen Square, the Forbidden City, the Temple of Heaven and the Summer Palace.

Our English-speaking guide will pick you up at your hotel lobby between 6:30 am and 7:30 am depending on the location of your hotel. The exact time will be informed by your guide a day before the tour starts, normally after 6:00 pm, by a phone call to your hotel.

The tour starts at the northern side of Tiananmen Square, one of the symbols of Beijing. Here you can see two pairs of 600-year-old stone lions, the characteristic ornamental columns, an outer golden water bridge and several other decorations. You guide will tell you about each one. The square is one of the biggest in the world, so from a distance, you will be able to see the National Flag Pole, the Monument to the People's Hero, the Chairman Mao Zedong Memorial Hall, the Great Hall of People and the National Museum.

Next, proceed to visit the Forbidden City, the largest and best-preserved ancient imperial palace group in China, with 500 years of history. Here you will learn about the history of this sprawling World Heritage-listed complex, where Ming and Qing emperors once lived and ruled in opulence. Take in some of the 1,000 rooms and 800 buildings, and marvel at the exquisite luxury of imperial life. The visit along the central axis from south to north will last for about 2 hours.

On the way to the Temple of Heaven, you will have a chance to visit the Chinese traditional medicine culture at a specialized hospital. The Temple of Heaven was a sacrificial complex for annual harvesting ceremonies during both the Ming and the Qing Dynasties. Its surrounding park is vast and also offers the opportunity to join in or watch locals doing their exercises, dancing or to just go for a pleasant stroll.

After a traditional lunch of Chinese cuisine in a local restaurant, you will enjoy a short visit to a Pearl Market where you can buy souvenirs for your loved ones. Then, you will visit the Summer Palace, one of Beijing's most popular landmarks and one of the best examples of an imperial garden in China. The site, which covers a total of 1.8 miles and incorporates a large lake within its boundaries, has long been a royal garden and was considerably enlarged during the reign of Empress Dowager Cixi. The Empress effectively controlled China for 47 years between 1861 and 1908.

Once this last visit is finished, we will go back to your hotel.
View More
CUSTOMER REVIEWS
5 - Excellent
Based on 1 review
Great Tour!
5 - Excellent
“I've spent an excellent day in Beijing! This tour was absolutely perfect to see the top places in Beijing! You were able to get a nice taste of Chinese culture! Our guide was very knowledgeable and informative!.The value of the tour was AMAZING!”
WHAT'S INCLUDED WHAT'S EXCLUDED
Why Book with Bookmundi
What are customers saying about Bookmundi
Excellent
4.71 Average 332 Reviews

The tour can be cancelled without penalty up to 3 days before.

Other Practical InformationPlease note that this tour has 2 stops at souvenir shops that sponsor the trip. The hotel must be in Beijing city centre (within the third ring road). If you stay in an apartment block, we will find the nearest hotel as your pickup point. If you stay in a hutong hotel in a narrow lane, please walk a few steps and wait for our bus on the main street.
NEED HELP OR HAVE A QUESTION ABOUT THIS TOUR?
If you have any question about this tour or need help with planning a trip, please do not hesitate to get in touch with us. We're ready to help.
Get help
hours 09 From US$ 35
CHECK AVAILABILITY
Response Time: 3 hours Response Rate: 100% MAKE AN ENQUIRY