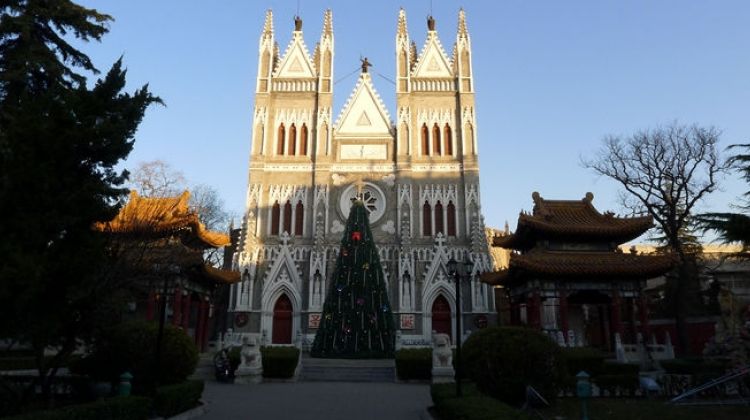 HIGHLIGHTS
If you have 6 hours available, this 6 hours sightseeing tour in Beijing is a great way to explore the city. To start with we will explore the Red Building of the old Peking University, from where the University students went out to Tian'anmen Square for demonstrations and initiated the famous 5.4 Movement.

Then we will stroll along the old cultural Wusi & Wenjin Street, one of the most beautiful street of Beijing. We pass the corner tower of the forbidden city wall and moat, a bridge which divided Beihai Park and Zhongnanhai Lakes, till arriving at the old palaces of Beijing library, which is one of the five biggest libraries in the world. It is a spectacular palace courtyard with historical stone lions and pillars moved from the "old Summer Palace".

Hereafter, we will visit the Northern Cathedra , the oldest and largest catholic church of Beijing. It is a beautiful historical church with a combination of Chinese and Western architecture. In front of the church is a Chinese pavilion and balustrades with stone lion carvings on the top. Inside the church, you will find the big portrait of the Virgin Mary and Jesus in Ming and Qing Royal robes.

In the end, we will stroll around the authentic neighborhood in the famous hutong alleys and visit some courtyard houses. Then finally take public bus or subway back to your hotel.
View More
WHAT'S INCLUDED WHAT'S EXCLUDED
Why Book with Bookmundi
What are customers saying about Bookmundi
Excellent
4.69 Average 364 Reviews

NEED HELP OR HAVE A QUESTION ABOUT THIS TOUR?
If you have any question about this tour or need help with planning a trip, please do not hesitate to get in touch with us. We're ready to help.
Get help
hours 06 From US$ 75
CHECK AVAILABILITY
Response Time: 3 hours Response Rate: 100% MAKE AN ENQUIRY