SAVE UP TO $1300
Unlock 5% Discount See all deals »
LIMITED OFFER ends in:
Request for call time received
You have successfully booked a call. Our travel consultants will get back to you around the requested time.
Okay, Got it!
BOOK A NEW YEAR 2020 CALL WITH OUR TRAVEL CONSULTANTS
Home  ›  Europe Tours  ›  Spain Tours  ›  Barcelona Tours  ›  Beach, Romance, Getaways And Relaxation  ›  Beaches  ›  Costa Brava Half-Day Trip 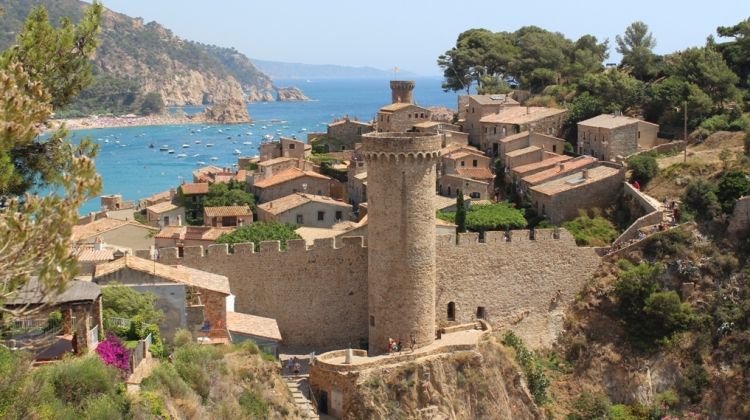 HIGHLIGHTS
Explore the coastal region of Catalonia during this eight-hour, guided tour and discover the southern part of Costa Brava during a visit to two of its villages. The coast earned its name due to its rocky, rugged coastline composed of small coves surrounded by pine forests and lapped by crystal water.

Its natural wealth and beauty is apparent in several territories and protected areas such us Cap de Creus, the Emporda Marshes and the Marine Reserve Medes islands. The fame of Costa Brava is also due to its villages. Small fishing towns with whitewashed walls and narrow winding streets still retain the charm of a by-gone era.

This tour leaves Placa Catalunya, Barcelona, every Monday, Wednesday and Saturday at 8:30 am. We recommend that you arrive at the starting point about 15 minutes earlier. From Placa Catalunya, we take the motorway to reach Lloret de Mar (the journey takes one hour and 15 minutes).

You have about an hour to explore this colorful village with your group and tour guide. Enjoy great views of its beaches. The two small hills on both sides of the beach promenade provide privileged viewpoints of the surrounding areas. Walk through its narrow streets, which still are reminiscent of its recent maritime past. Find plenty of shops to suit all tastes: from the latest brands to the typical beach bazaars. Admire architectural jewels such as Saint Roma Church, known for its exquisite modernist style. Inside the church is a 16th century altarpiece that is still well preserved.

At approximately 10:50 am, you will take a DofiJet boat to the neighboring village of Tossa de Mar. Admire the unique and characteristic landscape of Costa Brava: a procession of huge cliffs that have been shaped into fanciful forms over centuries by the sea and wind.

You will reach the village of Tossa de Mar, considered the pearl of Costa Brava, at about 12:00 noon. Enjoy its spectacular sceneries, from its shores, beaches and caves in the cliffs to its lush vegetation. History, too, has left its footprints in this area, from the Romans in Vila Romana dels Ametllers, one of the most important villas in the ancient Roman province of Tarraco, to the emblematic fortified old town of Tossa, which was listed as an artistic-historic monument in 1931 as it is the only remaining fortified medieval town on the Catalan coast. Little is left of the original, 13th-century structure as today’s ramparts are the result of several restorations undertaken throughout the years, especially that one dating from the late 14th-century.

On arrival in Tossa de Mar, you can start your walking tour from the beach, following the fortified perimeter up to the lighthouse on the top, from where you can appreciate stunning views of the coastline. While descending, we suggest that you follow the narrow streets past stone houses to reach the fishing district. You have some free time for lunch if you want to.

The Roman Vila dels Ametllers, with its well-preserved mosaic floors, is located in the city centre and is easily accessible, with free admission and explanatory panels. This tour comes to an end at around 3:00 pm. We will drive you back to Barcelona and drop you off at 4:30 pm at Plaza Catalunya.

NEED HELP OR HAVE A QUESTION ABOUT THIS TOUR?
If you have any question about this tour or need help with planning a trip, please do not hesitate to get in touch with us. We're ready to help.
Ask a question
Valentine's SUPER SALES Unlock Deal
hours 08 From US$ 59
Unlock US$ 3 in extra savings CHECK AVAILABILITY
Response Time: 1 hour Response Rate: 100% MAKE AN ENQUIRY