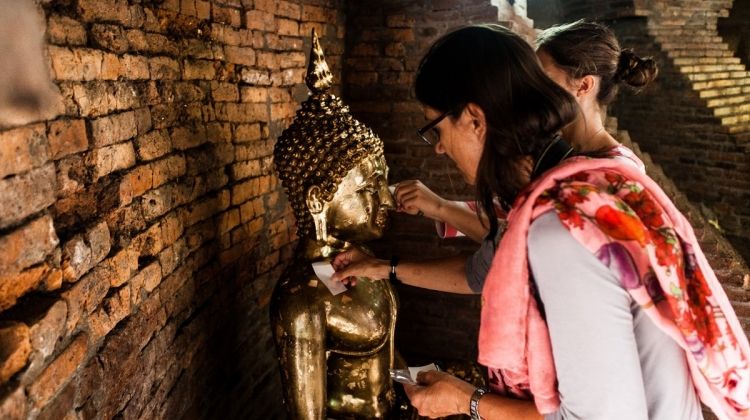 Our Thailand Heritage by Bicycle tour takes you back in time on a route paved by kingdom builders. The Chakri dynasty established the current capital of Bangkok or, as known by locals, Krung Thep, our starting point of the tour. From here we head north to the former Kingdom of Ayutthaya, once one of the wealthiest cities in the East during its heyday. The 33 kings of Ayutthaya ruled more than four centuries before the city was conquered and destroyed by the Burmese.

Cycling amongst the ruins we'll learn how the authoritarian god-kings of Ayutthaya ruled with an iron fist. Riding north through the rice basket of Thailand, we arrive at what is considered to be the first true Thai kingdom, Sukhothai. Under the Phra Ruang dynasty, the Thai alphabet was created, and Theravada Buddhism was established as the main religion in the short 130 years of power.

Riding further northward, the terrain becomes more rugged as mountains flank our path on both sides as enter what was once known as the Lanna Kingdoms. Here we'll cycle through the land once ruled by the Tai people and see their influence in the recently excavated ruins of the Haripunchai Kingdom before arriving at the northern capital of Chiang Mai founded in 1298.

CUSTOMER REVIEWS
5 - Excellent
Based on 1 review
S
5 - Excellent
Excellent
“The SpiceRoads experience was amazing, enlightening, filled with good food, great information, quiet roads and experiences that will be forever remembered._ The SpiceRoads crew went out of their way to make every moment wonderful. Thank you so much.”
ITINERARY Expand All
WHAT'S INCLUDED
Accommodation
Meals
Transport
Guide
WHAT'S EXCLUDED
Why Book with Bookmundi
What are customers saying about Bookmundi
Excellent
4.68 Average 349 Reviews

No additional cancellation fees apply for this Thailand Heritage by Bicycle tour. You can cancel the tour up to 45 days prior departure and avoid paying the full amount, but your deposit paid is non-refundable. No refund applies for cancellations within 44 days of departure.

For this Thailand Heritage by Bicycle tour getting the required visa(s) is the responsibility for each individual traveller, as visa requirements vary depending on your nationality. We recommend to check with your local embassies representing the countries that you are travelling to, as part of this itinerary.

Minimum Participants The minimum number of Participant for this trip is 2
NEED HELP OR HAVE A QUESTION ABOUT THIS TOUR?
If you have any question about this tour or need help with planning a trip, please do not hesitate to get in touch with us. We're ready to help.
Get help
days 07 SavingUS$ 88
You have unlocked exclusive savings:
5% OFF TODAY From US$ 1,750 US$ 1,662
Sorry, this product is currently not available.
Response Time: 3 hours Response Rate: 100% MAKE AN ENQUIRY

Tour is operated by : SpiceRoads
1 Reviews
Currently 05:48 in Bangkok MAKE AN ENQUIRY Response Time: 3 hours Response Rate: 100%
Download Trip Notes Enter your email to get a PDF file containing all the trip information for the Thailand Heritage by Bicycle tour.
Trip Notes Sent
We have sent the trip notes for this tour to:

If you book the Thailand Heritage by Bicycle tour within the next 5 days, you can get by applying the following code: