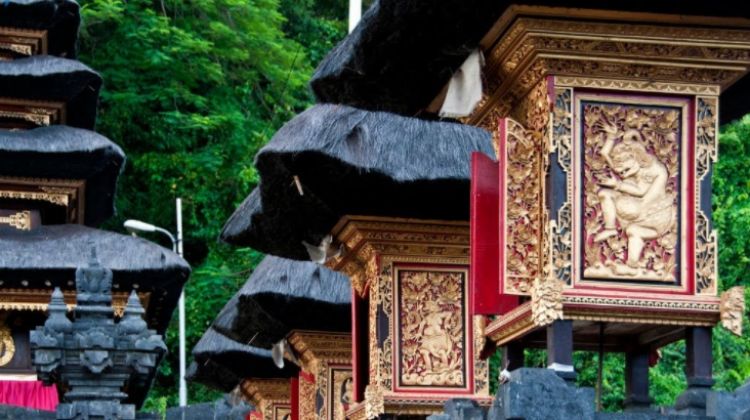 HIGHLIGHTS
On this tour, we will take you to explore the eastern part of Bali. Learn more about the culture, history and beautiful beaches of this part of the island!

The first destination will be the Bats Temple or Goa Lawah. The cave is home to thousands of bats, and, according to legend, the giant dragon-serpent Basuki. The next stop is the Palace of Justice Kerta Gos, in the temple complex of Klungkung. Once upon a time, this palace held the supreme court of the island, where the island’s rulers shaped people’s destinies. The paintings and ornaments in the palace are well-preserved and represent a rare instance of an ancient style of Klungkung painting. Then, we proceed to the amazing white sand beach, where you will be able to take a break, relax and swim in the ocean. The final point of the tour will be the Tirta Gangga Water Palace and Taman Ujung Royal Palace built by King of Karangasem. Both of these are part of a beautiful park with a large number of fountains and pools. At the end of the tour, we will drop you back to your hotel.

View More
CUSTOMER REVIEWS ABOUT THE SEVEN HOLIDAY
5 - Excellent
Based on 61 reviews
Sofia's review for another The Seven Holiday tour
5 - Excellent
“Honeymooning is always a good thing to be doing! Bali is an amazing destination as it is exotic, luxurious and affordable and The Seven Holiday has got the best honeymoon packages! We didnt need to think twice we had a look on their offers and we loved the idea of not having to plan or think about anything. Beautiful resorts, activities, food, time at the spa - it was all already included in the package, just like we wanted. We reached out to Oleg and within no time, we booked. We had a most magical honeymoon! Would love to try out all of their honeymoon packages if only we could”
Glenn's review for another The Seven Holiday tour
5 - Excellent
“Our vacation took us to many places and many activities around Indonesia. Fantastic!”
Linda's review for another The Seven Holiday tour
5 - Excellent
“It was such an exciting journey. I would say rather an expedition. Both islands java & bali are beautiful. We enjoyed every moment and wish we could go back right now. Very professionally organized well arranged. Thank you.”
Read more The Seven Holiday reviews
WHAT'S INCLUDED WHAT'S EXCLUDED
Why Book with Bookmundi
What are customers saying about Bookmundi
Excellent
4.71 Average 318 Reviews

NEED HELP OR HAVE A QUESTION ABOUT THIS TOUR?
If you have any question about this tour or need help with planning a trip, please do not hesitate to get in touch with us. We're ready to help.
Get help
days 01 From US$ 69 See Group Discount
CHECK AVAILABILITY
Response Time: 2 hours Response Rate: 100% MAKE AN ENQUIRY