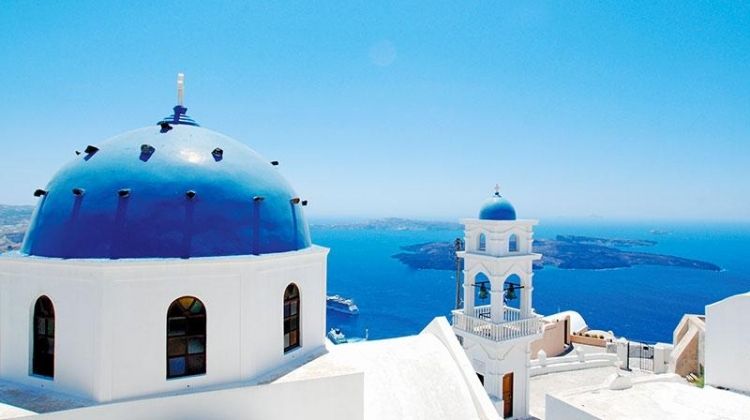 This 10-day Greece tour balances some of Greece's most impressive and fascinating ancient sites around Athens, Olympia and Delphi with the spectacular monasteries at Meteora and one of the Mediterranean's most beautiful and interesting islands, Santorini.
We start with a tour of Athens itself, taking in the ancient sites of the Acropolis and some of modern Athens below as well. Next we head west towards Mycenea with several stops and some scenic coastal scenery along the way. Our guide will provide explanations about Greek history and mythology, relating them to the places you're visiting. Its an amazing feeling seeing the actual places where heroes and heroines from mythology played out their stories. Our next stop is the lovely Mediterranean village of Nafplion which nestles at the foot of a cliff overlooked by the ramparts of the Palamidi Fortress. Next we head to Olympia, birthplace of the Olympics and more ancient sites, before we tour the temples and ruins at Delphi on the way. Our final major stop in mainland Greece is then to see the amazing cliiftop monasteries and breathtaking scenery of Meteora, before we head back to Athens.
We take to the ferry next and sail into the Aegean Sea to the volcanic island of Santorini. The island was created in its present form by a huge volcanic eruption over 3,500 years ago that created a large crater which is now filled by the sea forming a huge bay surrounded by steep cliffs and coloured lava pebble beaches. The island is full of small villages with narrow winding alleys and whitewashed buildings that are fascinating to hike through. There are also hot springs, wineries and the remaining active volcano itself to discover. We have a couple of days here to relax and explore the island before returning to Athens to finish our tour.
This is a small-group tour that runs throughout the year, staying in comfortable hotels at around the 4-star level. We can also arrange the tour privately if you would prefer not to join a group.
View More

No additional cancellation fees apply for this Classic Greece & Santorini tour. You can cancel the tour up to 56 days prior departure and avoid paying the full amount, but your deposit paid is non-refundable. No refund applies for cancellations within 55 days of departure.

For this Classic Greece & Santorini tour getting the required visa(s) is the responsibility for each individual traveller, as visa requirements vary depending on your nationality. We recommend to check with your local embassies representing the countries that you are travelling to, as part of this itinerary.

NEED HELP OR HAVE A QUESTION ABOUT THIS TOUR?
If you have any question about this tour or need help with planning a trip, please do not hesitate to get in touch with us. We're ready to help.
Get help
days 10 From US$ 3,000
Unlock US$ 150 in extra savings CHECK AVAILABILITY
Response Time: 2 hours Response Rate: 100% MAKE AN ENQUIRY

Tour is operated by : Encounters Travel
6 Reviews
MAKE AN ENQUIRY Response Time: 2 hours Response Rate: 100%
Download Trip Notes Enter your email to get a PDF file containing all the trip information for the Classic Greece & Santorini tour.
Trip Notes Sent
We have sent the trip notes for this tour to:

If you book the Classic Greece & Santorini tour within the next 5 days, you can get by applying the following code: