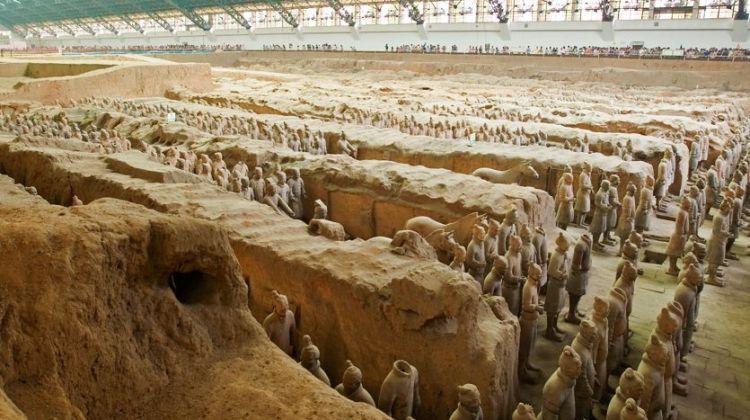 HIGHLIGHTS Download trip notes
The tour Western China & Central Silk Route starts in Ashgabat and ends in Xian. This is a cultural, religious and historic sites tour that takes 56 days. You will travel through Bishkek, Khiva, Lanzhou and 26 other destinations visiting Turkmenistan, Uzbekistan and 2 more countries. This is a guided group tour. The tour includes accommodation, transport, meals and others.

The Silk Road stems from the 1st Century BC, from a historic need for Chinese merchants to trade the treasures of the Han Empire, including silk, with civilisations further west. It began at the behest of Emperor Wu, by the great Chinese explorer Zhang Qian. Gradually the Chinese pushed further and further west into what is now Qing Shan. Still further west, was the great barrier of the Tian Shan Mountains and once the Torugart Pass had been mastered, the mountains and deserts of Central Asia, Persia and the Oxus River, opened up to Chinese traders and cultural interaction.

This is, therefore, the route that this trip, really concentrates on visiting all the great trading posts and historic cities, such as Khiva, Bukhara and Samarkand, along the way. We cross the great deserts and the vast mountains and witness the splendour of the civilisations along the way including the great city of Xi'an where it all started. We camp in remote deserts, stay with shepherds in the mountains and discover the religions and beliefs along the way.

No additional cancellation fees apply for this Western China & Central Silk Route tour. You can cancel the tour up to 56 days prior departure and avoid paying the full amount, but your deposit paid is non-refundable. No refund applies for cancellations within 55 days of departure.

For this Western China & Central Silk Route tour getting the required visa(s) is the responsibility for each individual traveller, as visa requirements vary depending on your nationality. We recommend to check with your local embassies representing the countries that you are travelling to, as part of this itinerary.

Local Payment The local payment is a group fund, paid separately from the trip price on the first day of the tour. It covers everything that the group does together on the ground. This is primarily hotel accommodation and campsite fees, meals whilst camping (but not while eating in restaurants), and included activities and puts money directly back to the local community. The local payment, or kitty system, is unique to overlanding tours and provides maximum flexibility and best value on the road - you can see exactly what is being paid for, you get everything at cost price, it keeps costs competitive by leveraging group expenses and saves on administrative costs. The fund is run by the tour guide, and any excess left over at the end is returned equally to the group. Local prices are estimated in USD when we print the brochure then reviewed monthly as local costs and exchange rates vary throughout the year. It's therefore important once you book your trip to check the website regularly and just before departure for any changes to the amount.
NEED HELP OR HAVE A QUESTION ABOUT THIS TOUR?
If you have any question about this tour or need help with planning a trip, please do not hesitate to get in touch with us. We're ready to help.
Get help
days 56 From US$ 8,895
Unlock US$ 445 in extra savings CHECK AVAILABILITY
Response Time: 3 hours Response Rate: 100% MAKE AN ENQUIRY

Tour is operated by : Dragoman
1020 Reviews
Currently 13:31 in Debenham - Open Now MAKE AN ENQUIRY Response Time: 3 hours Response Rate: 100%
Download Trip Notes Enter your email to get a PDF file containing all the trip information for the Western China & Central Silk Route tour.
Trip Notes Sent
We have sent the trip notes for this tour to:

If you book the Western China & Central Silk Route tour within the next 5 days, you can get by applying the following code: