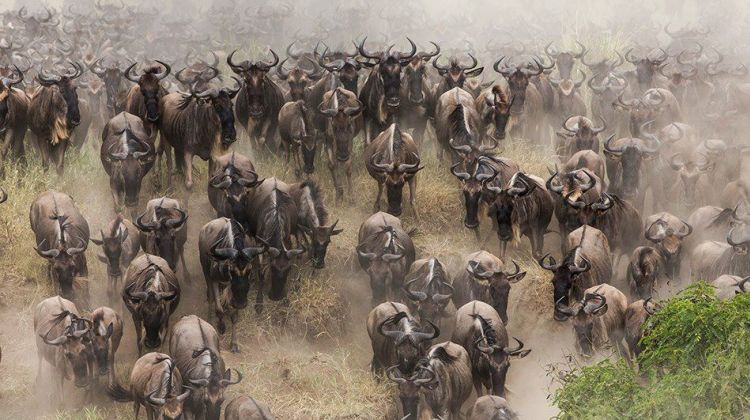 HIGHLIGHTS
All about the 6 Days-The Wildebeest Migration.
A little after this, in late November and December, the herds of the wildebeest migration arrive on the short-grass plains of the Serengeti. These are south and east of Seronera, around Ndutu and include the north of the Ngorongoro Conservation Area. Dispersed across these plains, wildebeest and zebra are everywhere – feeding on the fresh, nutritious grasses. They stay here through January, February and March, with most wildebeest calves born in a short window around February. Gradually they spread west across these plains, then around April they start their great migration north.

May the Serengeti’s wildebeest all seem to be moving north, migrating to seek fresh grazing and water. The area around Moru Kopjes and west of Seronera is then hectic with a series of moving columns, often containing hundreds of thousands of animals – joined by many zebra, and a scattering of Thomson’s and Grant’s gazelles.

Some of the migration then head due north of Seronera, but most are usually further west. Around June the wildebeest migration is often halted on the south side of the Grumeti River, which has some channels which block or slow their migration north. The wildebeest then congregate there, in the Western Corridor, often building up to a high density before crossing the river. The river here is normally a series of pools and channels, but it’s not continuous – and so whilst they always represent an annual feast for the Grumeti River’s large crocodiles, these aren’t usually quite as spectacular as the crossings of the Mara River, further north.

The wildebeest migration continues moving northwards during July and August, often spreading out across a broad front: some heading through Grumeti Reserve and Ikorongo, others north through the heart of the Serengeti National Park.
View More
ITINERARY Expand All
WHAT'S INCLUDED WHAT'S EXCLUDED
Why Book with Bookmundi
What are customers saying about Bookmundi
Excellent
4.68 Average 345 Reviews

Other Practical InformationPACKING LIST Credit and ATM cards (check that your bank has international ATM locations to avoid high fees, and tell them where you’ll be traveling before you leave) • Sun block • Insect repellent • Lip balm • Sweater or fleece • Warm jacket • Light raincoat • Socks • Underwear • Antihistamine cream for insect bites & stings • First aid kit including Imodium • Rehydration salts • Tissues • Malaria tablets (see your doctor before you travel for up-to-date advice) • Motion sickness tablets if required • Sandals or flip-flops to wear around camp
NEED HELP OR HAVE A QUESTION ABOUT THIS TOUR?
If you have any question about this tour or need help with planning a trip, please do not hesitate to get in touch with us. We're ready to help.
Get help
days 06 From US$ 1,880 See Group Discount
CHECK AVAILABILITY
Response Time: 3 hours Response Rate: 100% MAKE AN ENQUIRY