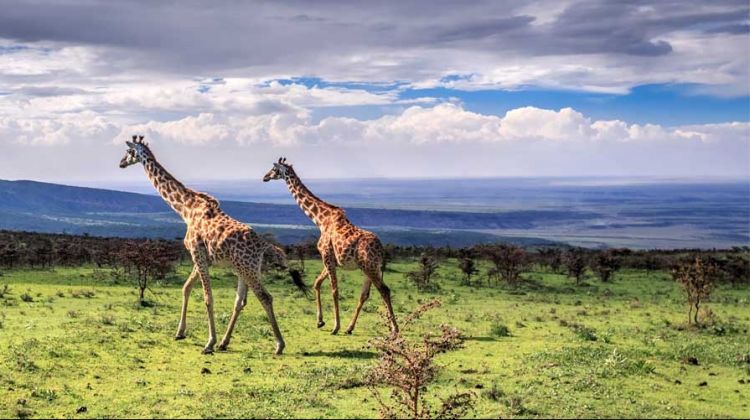 HIGHLIGHTS
Our 1-day Safari to Ngorongoro Crater is designed to offer visitors who are short on time a taste of an African safari. Do you have a free day in your holiday, maybe before or after a Kilimanjaro trekking adventure? Or are you perhaps waiting for a flight to your next destination? Join us for a brief but unforgettable African wildlife safari experience in one of Tanzania's most famous parks.

Meet our professional tour guide/driver in Arusha town, who will deliver a short safari info briefing over breakfast. Afterwards, travel with your guide to the famous Ngorongoro Crater where you will descend 600m into this magnificent crater for a full-day game drive.

The Ngorongoro Crater is one of the most densely crowded African wildlife areas in the world and is home to an estimated 30,000 animals including some of Tanzania’s last remaining black rhino. Supported by a year round water supply and fodder, the Ngorongoro National Park supports a vast variety of animals, which include herds of wildebeest, zebra, buffalo, eland, warthog, hippo, and giant African elephants. Another big draw card to this picturesque national park is the dense population of predators such as lions, hyenas, jackals, cheetahs and the ever-elusive leopard, which often requires a trained eye to spot.

We will stop and enjoy a picnic lunch in the crater and then proceed with the game drive until late evening. Our African safari adventure will end back in Arusha town.

View More
CUSTOMER REVIEWS ABOUT DAHLIA AFRICA
5 - Excellent
Based on 21 reviews
A
5 - Excellent
Review for another Dahlia Africa tour
“During our trip Everything was beyond perfect! The guides knowledge about wildlife and nature was beyond everything, their love to nature and the community they take us has changed our life, every moment will be cherished for a lifetime.”
G
5 - Excellent
Geraldine's review for another Dahlia Africa tour
“Dahlia Africa suggested this route to us as it is 9 days which minimizes your risk of altitude sickness due to more acclimatization time. At many points we felt as though we were the only people on the mountain due to the route being a less commonly used one. Dahlia Africa were faultless from beginning to end, our guides Linus and Brian were extremely knowledgeable and motivational, keeping our spirits high at some of the trickier points of the track. The food cooked for us by Asha, the chef, was always delicious and she always ensured we were happy with what was on the menu so we were getting enough food to keep us going.”
A
5 - Excellent
Review for another Dahlia Africa tour
“From the very beginning, our travel agent was flexible with our budget and needs and gave us an excellent recommendation for a 10-night safari and 5days in Zanzibar Islands.”
Read more Dahlia Africa reviews
WHAT'S INCLUDED OPTIONAL ADDONS (Available during check-out) WHAT'S EXCLUDED
Why Book with Bookmundi
What are customers saying about Bookmundi
Excellent
4.70 Average 335 Reviews

NEED HELP OR HAVE A QUESTION ABOUT THIS TOUR?
If you have any question about this tour or need help with planning a trip, please do not hesitate to get in touch with us. We're ready to help.
Get help
hours 12 From US$ 450 See Group Discount
CHECK AVAILABILITY
Response Time: 1 hour Response Rate: 100% MAKE AN ENQUIRY